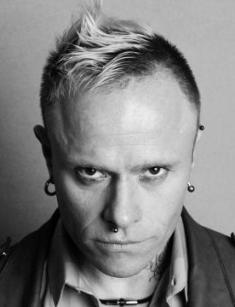 The British musician and dancer Keith Flint earned his fame thanks to the group The Prodigy – or, perhaps, the group became popular thanks to its charismatic and eccentric member who founded the project and created the majority of the hits and albums. The stage image of a crazy maniac made Flint one of the most recognizable figures in the world of music.

Keith Charles Flint was born in London on September 17, 1969. His family could hardly be called happy: the antagonism with the father began in the artist’s childhood and continued for many years until he decided he did not need the parent in his life.

The musician mentioned in his interviews that Clive Flint’s upbringing was harsh. It was extremely difficult for the dyslexic boy to perceive written and audio information; work with specialists did not give any results. Keith explained it by his inborn affinity to self-destruction.

The parents kept moving; their son was educated at various schools in Essex, Springfield, and Chelmsford. His grades were low. Little Flint was a wallflower; he often locked himself in a room, listened to hard music, and banged his head up against the wall.

The young man did not see any future for himself and had no career ambitions. When the father threw him out of the house, he took a backpack and started traveling across Near East and North Africa; he also worked as a street trader in Israel.

Eventually, Flint came back to Great Britain and settled in Braintree; he got hired as a roofer, wore an Afghan coat, and got long hair, so he received the nickname “Sheepdog”. This is when Keith started mastering his dance skills. The young man was a big fan of Pink Floyd and rave; in 1988, he became a frequenter of dance parties at the M25. Soon, the future celebrity met Leeroy Thornhill, a funk dancer; they made a duet with a unique style. Their meeting with the local DJ Liam Howlett determined everything and opened the road to the new life.

Keith heard Howlett’s music at the rave club The Barn, Braintree. He was impressed and asked the musician for his disc; he also offered the DJ to create a project together. Flint did not sing at that period, but he was going to be a big-beat backup dancer. Besides, Keith’s partner, Thornhill, could play the keyboard.

The history of The Prodigy began in 1990: MC Maxim Reality and the dancer Sharky joined the trio. The next year, the group presented their first work. Keith Flint was the frontman, even though he did not sing until 1996: the young man’s bright image influenced people’s perception, and they associated the band with his unusual figure. The dancer had his hair dyed pink, used an eyeliner, got many face piercings and tattoos; he was jumping, screaming, spitting, and cursing on the stage. Original costumes finished the artist’s image: for example, he appeared in a giant transparent balloon made of plastics.

At the end of 1995, the dancer debuted as a soloist and recorded the single “Firestarter”. He used to “scream” with his body – now it was time to do it with his voice. Keith’s vocal talent was not much impressive, but he compensated it with the roaring tone color and expressiveness. The musician changed his hairstyle and shaved a part of his hair so that the famous “horns” appeared on both sides.

Flint worked on dozens of songs for The Prodigy, such as “World On Fire”, “Colors”, and “Baby’s Got a Temper”. The latter music video was banned on TV channels. The 1997 album The Fat of the Land became the most successful disc; Flint performed the majority of the hits: “Breathe”, “Serial Thrilla”, “Fuel My Fire”, and others.

The band’s music seemed scary and insane; parents complained on Keith and worried their kids would see the guy who, apparently, needed medical care. Only Marilyn Manson looked more frightening.

According to the artist, music and stage euphoria were the only significant things in his life. The Prodigy remained his only passion until he met his future wife; however, he also had a couple of side projects, including the solo one: Flint.

Flint dated the TV presenter Gail Porter until 2000. The media called the couple “the beauty and the beast”: the woman looked kind and innocent near her boyfriend.

Later, another woman entered the musician’s life: the Japanese DJ Gedo Super Mega Bitch. He described their first meeting as a bolt from the blue and said his life changed dramatically thanks to her. Keith stopped taking drugs, alcohol, and meds; he gave up smoking and forgot about his eccentric style. The lovers married in 2006; they had no children.

Flint turned into a perfect family man. He rebuilt the neglected house in Essex, got some farmland and dogs, and started gardening. One could take him for an ordinary citizen, with his tattoos covered by clothes.

Keith’s height was 5.58 feet (170 cm.). He liked boxing and Brazilian jiu-jitsu. Besides, the musician was fond of motor racing and participated in amateurish and official competitions; he founded Team Traction Control.

With his unstable personality and past chemical dependence, Keith talked about death and suicide. However, he said he was a coward to do anything like that and joked: his dogs would not forgive him.

On March 4, 2019, it was announced the singer died in his own house in Essex; he did not make it to his 50th birthday six months. The Prodigy published a mournful post on Instagram and reported about the musician’s suicide. The artists expressed their anger and shock but wished their colleague and friend to rest in peace.

Keith Flint’s net worth was $15 million.