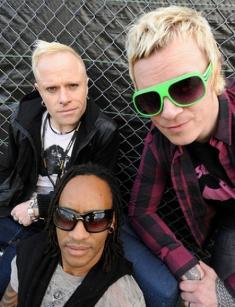 The biography of the legendary band The Prodigy is exciting and full of events. These musicians are a great example of a talented group that has neglected stereotypes and established its own rules.

The band chose their own path and gained worldwide popularity from the depths of the underground. Musical rhythms of their songs fill with energy and cheer up.

Throughout the existence of the band, its members have won various awards, which only confirms their talent.

The Prodigy was formed in 1990 in the UK. Liam Howlett is considered to be a founder and inspirer. In high school, the boy was fascinated by popular hip-hop groups and movies about breakers.

Over time, Liam began to think that it would be nice to start writing music himself. His career began working as a DJ in the hip-hop team, which he left being disappointed in this culture.

Keith Flint and Maxim Reality were the vocalists, Leeroy Thornhill was a keyboardist, and they formed the first line-up. As for Liam, he was considered to be a universal musician who was responsible for drums, guitar, and keys. Female dancer Sharky was also in the list of band members.

The band's name was taken from the firm of Howlett's first synthesizer, Moog Prodigy, which he bought by money earned at the construction site.

In February 1991 a first mini-album called What Evil Lurks was released. The album consisted mostly of the early works of a frontman. Listeners in the rave scene quickly noticed the album, and the tracks went into the rotation in the clubs. After a successful debut, The Prodigy performed in small clubs in the UK. A little later, the band gave concerts in Italy, where the public positively received their songs. Sharky left the line-up when the tour ended.

In the summer of 1991, the band released the single Charly which reached number 3 on the UK Singles Chart. It was a key piece in the band's history because after its release record companies got interested in The Prodigy. The single also caused vigorous debates over the end of the rave scene. Liam repeatedly received unflattering comments from other musicians, as in his work he moved away from the standard concept of love and peace.

The first studio album was released under the name Experience and appeared on sale in the autumn of 1992. The disc held the first position in the UK for 25 weeks and in a few days was certified golden in Poland and platinum in the UK.

After cooperation with other musical groups, The Prodigy was exposed to new musical trends. This was reflected in the style of the next studio material, Music for the Jilted Generation, released in the summer of 1994.

The record differs from the previous album by the influence of industrial and rock music. Critics met the tracks with positive reviews, and the band was nominated for several awards. The huge success of the album encouraged The Prodigy to go on a large-scale tour.

After exhausting concerts, the musicians started recording new material. Work on the third album lasted about two years, and The Fat of the Land was released in the summer of 1997. The disc instantly reached the top of all the national charts and received rave reviews.

The single Smack My Bitch Up caused a lot of controversies and has repeatedly been called scandalous because of profanity and belittling of women's rights. The song was played only at night time, and the video was banned entirely.

In 1999, the line-up changed. Keith got in an accident and seriously injured his knee, and a year later Leeroy left the band. The musician decided that he wanted to develop independently and build a solo career. After those adverse events, the activity of the group had to be stopped. In the band's website being replaced with their logo and the optimistic words "We will be back..." set against a black background, which would remain until 2002.

After a long silence, the artists released their next studio album, Always Outnumbered, Never Outgunned, which instantly took high positions in the charts of many countries. However, critics weren't impressed by this album.

It is noteworthy that Maxim and Keith didn't actually participate in the recording of the material. Among the invited musicians listed Liam, Noel Gallagher, Twista, and others. In the autumn of 2004, The Prodigy went on a tour in support of the new CD, during the tour the musicians also visited Moscow and St. Petersburg.

Later, the group presented four new songs, one of which (First Warning), sounded in the film Smokin' Aces. The following February, the fifth studio album called Invaders Must Die was released on its own record label. This time, all members of the group participated in the recording. Both fans and music critics positively received the album.

In the fall of 2010, Liam announced that after a US tour with Linkin Park, the band would begin recording material for their next album. In 2011, The Prodigy became the headliner of the rock festival Download Festival.

The album The Day Is My Enemy was released in 2015 and, as Liam promised, it felt "fresh" whilst darker. The band tried to return their original sound, which was confirmed in the title track called Omen. Keith demonstrated great vocals, and Maxim starred in the apocalyptic video World's on Fire. In support of the album, the band spent the winter touring the UK and Europe.

Now the artists are experimenting and continue to delight fans with new hits. In the summer of 2018, the new single Need Some1 premiered on the radio show Annie Mac.

On the same day, a video for this song was published on the official group's channel on YouTube, and it was announced about a new album called No Tourists. It was released on November 2, 2018, and contained ten tracks.

The group has official accounts in social networks Instagram, Twitter. They are regularly updated with news, photos, and videos.

On the 4th of March the fans of The Prodigy were shocked by the news that their idol Keith Flint died. According to the information of The Sun tabloid, the musician was found dead on Monday morning, the 4th of March in his house in Dunmow, in the Essex County. The reasons of the musician's death aren't known yet.

In the middle of March there appeared new information about the details of Keith's death.

By the information of BBC, the police didn't find criminal-related aspects in the death of Keith Flint. According to post-mortem, it was a suicide and the musician died in te result of hanging.