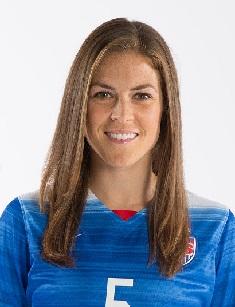 Kelley Maureen O’Hara is an American soccer player, a FIFA Women's World Cup champion and Olympic soccer gold medalist performing under No. 5 on her jersey.

Kelley O'Hara's birthplace is Fayetteville, Georgia – she was born there on August 4, 1988, to the family of Dan and Karen O'Hara. Besides Kelley, there were two more children in the family – her brother Jerry and a sister Erin. O'Hara is of Irish ancestry. She passed her childhood in Peachtree City, Georgia.

There young O'Hara studied at Starr's Mill High School in Fayette County. Attending it, Kelley joined its students' soccer team. She led it to the 5A state title in 2006 with 20 goals and 16 assists. Eventually, the Panthers got to the second place in the state championships when O'Hara was a sophomore.

Having graduated from high school, Kelley entered Stanford University – there she joined the Cardinal team. Her senior season was one of the best seasons in Division I history – she made 26 goals and 13 assists. The team advanced to the 2009 College Cup where was unfortunately beaten by the North Carolina 1-0. O'Hara closed the season with 57 goals and 32 assists, both school records at the time

In 2010 Kelley O'Hara applied for the participation in the WPS Draft. The franchise got through successful times then – they finished first during the regular season, having beaten the Philadelphia Independence 4–1 with goals from O'Hara, Christine Sinclair, Tobin Heath and Marta. As a result, they earned a direct route to the championship playoff game where fought against the Philadelphia Independence. In the finals, the franchise won the opposers 4-0.

In 2010 Kelley transferred to the Boston Breakers. Performing on an outside midfielder position, O'Hara registered ten goals during two seasons.

Remarkably, in her career, the woman has performed on many positions, including forward, winger, right-back, and central midfielder.

December 2017 was marked by O'Hara's trade to Utah Royals FC. Because of a hamstring injury, the sportsman took part only in 8 games in 2018.

Kelley’s net worth is evaluated at $2 million.

Speaking about O'Hara's career, it is impossible to forget she has performed under the United States’ flag at various championships. So, in 2006 she joined United States U-20 women's national soccer team to take part in the 2006 FIFA U-20 Women's World Championship in Russia. Playing there, O'Hara brought her team two goals - one against the Congo (for which game she was named FIFA's player of the match) and one against Germany. Also, she got two yellow cards in the match against Argentina and was ejected.

The next year, O'Hara alongside Abby Wambach performed at the 2007 Pan American Games. Kelley registered four goals playing against Paraguay, Panama, and Mexico in the women's football tournament.

In February 2008, Kelley was invited to the U-20 women's national team again to take part in the U-20 Four Nations Tournament in Chile and in the 2008 CONCACAF Women's U-20 Championship in Puebla, Mexico.

In 2011 Kelley O'Hara replaced Lindsay Tarpley who injured her ankle in a send-off match against Japan on May 14. The sportsman earned just one cap at right midfield in the 2011 FIFA Women's World Cup in the final group stage game against Sweden. The United States went on to win the silver medal in that tournament.

In 2012 Kelley replaced Ali Krieger on an outside back position in the CONCACAF Women's Olympic Qualifying Tournament. She started the match against Guatemala held on January 22, 2012, and scored three assists. Moreover, she started the match against Costa Rica at right back. Having won the game, the US advanced to the 2012 Summer Olympics in London.

Remarkably, O'Hara played every minute for the United States in the Olympic Games.

O'Hara firstly started the quarter-final game against China PR. Kelley was substituted with Christen Press in the 61st minute. O'Hara made her first career international goal in the United States' 2–0 victory over Germany in the semi-final. In the final her team faced Japan – O'Hara started playing in the 61st minute as a replacement for Megan Rapinoe. Eventually, the US won the opposer 5-2. It was their first World Cup title since 1999 and the third overall World Cup title for the United States since the inaugural Women's World Cup in 1991.

O'Hara has had a boyfriend – Adam Sweat. They started dating in 2012 and fans thought they would marry. However, the partners have reportedly broken up for an unknown reason.

Kelley remains a family-centric and homey person. She loves spending her off-time in Georgia at her parents’ house.

Interestingly, there is another famous Kelley O’Hara – an outstanding American actress.