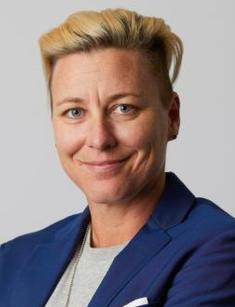 Wambach, an experienced soccer player in past, retired in 2015. In her 17-year career, the woman gained the name of the most precious sportsman playing soccer in America. Having taken part in lots of championships and Olympics, she has always brought her team the best titles and medals. After retirement, the woman became involved in personal development – recently she has published several motivational books consisting of secrets of a happy life. It’s high time we knew new facts of Abby Wambach!

Her birthplace is New York, the U.S. Abby's parents are Pete Wambach and his wife, Judy. She was raised in an extended family of 7 kids and was the youngest one. Abby found a passion for her life – playing soccer – at the age of 4. Initially, one of her siblings played it and encouraged Abby for it.

In 1998 Wambach graduated from school. Being a student, she joined the school's soccer team and developed her skills hugely – their experienced coach noticed Wambach's abilities and paid to her more attention than to her teammates. He taught her the trick named diving headers which she would later use performing at international championships. Totally, the girl registered 140 goals as a student – the highest result in the whole school's history.

Around that time, Abby succeeded to be voted as a captain of the Rochester Spirit club team. Besides, she advanced to the Olympic Development Program (ODP) U-16 National Team. Her astonishing stats made professionals notice the girl and invite her to practice and perform with the national sports squad. So, she fought for the motherland at the competition held in China.

When the time to enter a college came, she was torn between dozens of educational establishments offering her good conditions. In her first season at a college, the sportsman recommended herself as a leader of the squad helping it move to NCAA national competition. Wambach brought the team lots of titles. In a decade, she made 96 goals.

Due to her excellent performances at local sports events, Wambach advanced to American sports camp in 2001.

2002 was marked by the start of Wambach's club career.

The following season, she led her squad to the Founders Cup III. The final game was against Atlanta Beat, and Wambach showed astonishing results. Besides registering the second-fastest goal in the whole Founders Club history, the woman helped the squad close the match 2-1.

The same year, Abby began her professional international sports career. So, she advanced to the US roster and made the list of athletes playing in the 2003 FIFA Women's World Cup. Performing there, Abby registered three goals – the best result in the American team.

When FIFA 2003 came to an end, Wambach began preparing with the national US squad for the Summer Olympics which would be held in 2004. As it is usually the case, Abby was a leading sportsman of the team. They fought against Brazil in the final game, and Wambach brought her team victory, making a goal in the last minute. So, they beat the opposer 2-1, and Wambach's goal was named one of the four best goals in the history of soccer.

Totally, she made four goals while playing in the Summer Olympics.

In 2007 Wambach was seen performing at the FIFA Women's World Cup again. The woman registered a goal in every single game. Unfortunately, her team was beaten by Brazil in the semi-final and got to third place. In total, Abby made six goals in 6 games.

The woman was offered to join the national team to perform at the Summer Olympics in 2008 held in China. However, she had to turn it down because of an injury. Although, despite being unable to play, she supported her teammates mentally – as a result, the squad succeeded to win gold.

In the game against Canada held in July 2009, the sportsman recorded her 100th goal. Subsequently, she was included in the list of players who have made 100 international goals in their careers.

In 2008, she joined Women's Professional Soccer alongside Alex Morgan.

In 2012, she appeared at the Summer Olympics alongside Hope Solo. Abby made five goals in every game apart from the final match. Additionally, the tournament brought the sportsman her 140th international goal.

2015 was marked by Wambach's last FIFA Women's World Cup – it took place in Canada. Then the US team became a winner. At the end of the year, Abby claimed she would retire.

Her net worth has been evaluated at $4 million.

As you could already understand, Wambach is one of the most precious soccer players in the US. Her playing style can be described as effective and direct. Besides, she has a perfect sense of space and positioning. The woman is respected for her ability to score goals with her head.

In the whole Wambach's career, she trained a lot, always improved her skills and kept herself fit.

In her life, the sportsman has had legal problems. So, in 2016 she was arrested after running a red light. The police stopped her car and offered her to undergo a field sobriety test which she failed. After releasing, she publicly claimed she had an evening at her pal's house where they drank alcohol. The woman apologized for her actions.

Abby Wambach is a lesbian – she has announced it in public at the beginning of the 2010s. The news became a subject of people’s heated discussions – her relatives and pals was against this her choice initially, but later took it for granted. In 2013 she exchanged the vows with Sarah Huffman. The two were teammates and met while training. The spouses parted ways in 2016.

The same year Wambach's relationship with her current wife - a writer Glennon Doyle Melton - became public. They got engaged in February 2017 and tied the knot in May.

Besides sport, Wambach has succeeded in writing. So, she is an author of several books, including Wolfpack. In the project, she gives her readers pieces of advice how to find powers to get through life ordeals and not to be afraid of coping with problems. Many women see her with admiration and respect. Wambach is a strong woman – not only she has a strong body, but also a brave heart. Abby has performed with a motivational speech referring to her book while starring on The Ellen DeGeneres Show.

In 2016 it was announced Wambach and Megan Rapinoe claimed they would donate their brains after the death for scientific researches. Remarkably, she has always been interested in biology, diseases and ways of their healing – that’s why she is ready to sacrifice by the part of her body for the sake of science.

In 2018 the sportsman took part in a photoshoot for the Magazine Body Issue. Also, she has been featured in several commercials.