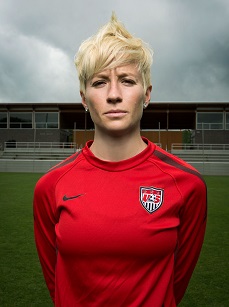 Megan Anna Rapinoe is a famous American professional soccer player who has become popular for her professional talent in sports. The player is also a prominent activist; she takes part in numerous organizations that protect gay rights.

Megan Rapinoe was born in Redding, California, the U.S. She is not the only child of her parents, Jim and Denise. Megan has five siblings, including her fraternal twin, Rachael Rapinoe.

As a kid, Rapinoe took an example from her older brother Brian. At age three, she started to play soccer together with her brother. Unfortunately, Brain had problems with drugs and was put in juvenile detention at the age of fifteen. His younger sister, Megan, became a big inspiration for him to avoid drugs. After Megan's success in international soccer, Brain decided to change his way of living for the better.

Rapinoe spent most of her youth playing with teams coached by her father until high school. She received many awards for her talent in soccer and showed her great potential to sports.

From 2002 to 2005, Rapinoe was a member of the Elk Grove Pride team in the Women's Premier Soccer League.

She and her sister both attended the University of Portland in Portland, Oregon. Megan decided to play for the Portland Pilots on full scholarships. In 2005, as a freshman, she demonstrated her soccer skills and helped the team to win. Rapinoe played as an attacking midfielder, ranking fifth for freshman point totals in the school's history.

In 2006, Megan was seen among the nation's leading scorers. However, she suffered two ACL injuries. She had trauma during a match against Washington State University and got her second injury in 2007.

After recovering from her second ACL injury, Rapinoe was back for the 2008 season. The player was on the starting lineup in all 22 games for the Pilots. She was named West Coast Conference Player of the Year for her outstanding results.

Megan Rapinoe was selected second overall in the 2009 WPS Draft by the Chicago Red Stars for the inaugural season of Women's Professional Soccer. In August 2009, she played for the league's All-Star Team.

In 2010, she started in 19 of the 20 games in which she appeared for the Red Stars. The same year Rapinoe signed a contract with expansion team Philadelphia Independence after the Chicago Red Stars stopped playing.

In 2011, the sportswoman provided good results during the team's semi-final match against the Boston Breakers, helping the team to win and move on to the championship final.

Later Megan went to Australia and signed a new contract with Australian women soccer club, Sydney FC for the 2011-2012 season. Then she started to play for French women soccer club, Olympique Lyon making her debut at the UEFA Women’s Champions League.

From 2003 to 2005, Megan played for the United States under-19 team. Her first international match with the under-19 team happened in January 2003 in Chula Vista, California. In July 2003, she was in a European tour that took place in the Netherlands and Germany. On March 1, 2003, Megan scored her first goal with the team against Mexico.

During the 2004 FIFA U-19 Women's World Championship in Thailand, she scored a team-high three goals, including one in the third place match victory against Brazil.

In 2006, she made her international debut against Ireland in a friendly match. She scored her first international goal for the USA against Taiwan the same year.

Megan has represented the USA at the 2011 FIFA Women’s World Cup and became the prominent player for the US team that won the Olympic gold medal at the 2012 London Olympics. Megan is internationally known for her crafty style of play and her precise cross to Abby Wambach in the 122nd minute of the 2011 FIFA Women's World Cup quarterfinals against Brazil, which resulted in a victory for the Americans.

As the captain of the team, she contributed greatly in the US winning the 2015 FIFA Women’s World Cup in Canada. She also appeared in the U.S. Women's National Team's matches against Australia and Belgium.

On June 24, 2019, as a forward Megan scored a goal during the France 2019 Women's World Cup round of sixteen football match between Spain and USA. The U.S. Women's National Team defeated Thailand, 13-0, in its first match, which caused many arguments. As the players continued to pour in a number of goals, with little resistance from Thailand, some people started criticizing Team USA for running up the score. Some critics called it indecent, when the women's team celebrated each goal, sometimes with choreographed moves.

During the Women's World Cup there were discussions about the players who spent time on the bench. The coach Jill Ellis explained why Megan Rapinoe, Alex Morgan, and other soccer stars didn't play against Chile. She noted that spreading the minutes around the players was a necessary measure. It helped to provide better rest before important moments in the games.

Rapinoe is known to be a lesbian. In July 2012, she announced about her relationship with Australian soccer player Sarah Walsh. They started dating in 2009 and ended their relationship in 2013.

In August 2015, Megan began dating the American singer and songwriter Sera Cahoone. However, in January 2017, Rapinoe stated that their wedding plans were going to be canceled.

On July 20, 2017, Rapinoe declared having a relationship with Seattle Storm player Sue Bird. In 2018, they became the first same-sex couple on the cover of ESPN's The Body Issue.

She is very active in the life of her country. She stands against gender discrimination. Megan has also done philanthropic work for the Gay, Lesbian & Straight Education Network and the United States Olympic & Paralympic Committee. In 2013, she became an ambassador for Athlete Ally, a nonprofit organization that focuses on ending homophobia and transphobia in sports.

On her Instagram profile, the famous soccer player has over 1,8 million followers and over 840,000 readers on Twitter.

In the interviews, Megan shares how she spends the time on flights or between training and games. She says that usually she sleeps, listens to music, or reads books. She also states that although she has never been a TV lover but at present, she is a big fan of the series Sons of Anarchy and Grey's Anatomy.

The sportswoman earns mostly from her endorsement deals with Nike and Samsung, the clothing company Wildfang, a medical device company, and some others. Rapinoe has an estimated net worth around $3 million.

Megan Rapinoe can be frequently seen on media, including printed media and television.

She was featured on the cover of the March 2013 edition of Curve. In April, 2013, she was featured in the edition of The New York Times in the interview about her experiences in France, with the national team, and coming out publicly before the 2012 Olympics.

In 2019, she became the first openly gay woman in the annual Sports Illustrated swimsuit issue.

Rapinoe has made appearances on The Daily Show with Jon Stewart, The Today Show, The Rachel Maddow Show and Good Morning America. In 2012, she was the focus of a Fox Soccer channel feature entitled, Fox Soccer Exclusive: Megan Rapinoe.

In 2016, Rapinoe starred with teammates Hope Solo and Crystal Dunn in a documentary series called Keeping Score broadcast by Fullscreen.

Rapinoe also appeared along with her national teammates in the EA Sports' FIFA video game series starting in FIFA 16 It was the first time women players were included in the game.

Megan openly admits her attitude towards President Trump's politics. She tries to draw attention to such problems as sexism and racism. She demonstrated one of her protests during the match at World Cup 2019 when she stood silent during the anthem. President Trump expressed his opinion on Megan Rapinoe's silence, saying that it was inappropriate. The player hopes that her actions will help to change the situation and solve many social problems in the future.