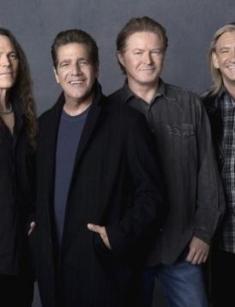 The Eagles is one of the most famous American bands of the 70s, which plays predominantly country music and soft-rock. The collection of Their Greatest Hits 1971-1975 released by the group in 1976 became the most commercially successful album of all time with a total sold-out of 38 million copies.

The history of the group dates back to 1971, when four musicians who immigrated to Los Angeles from other parts of the country, united to create a new musical band.

Singer and bassist Randy Meisner (born in Scottsbluff, Nebraska March 8, 1946) moved to Los Angeles in 1964 as a member of the band Soul Survivors which was later renamed to Poor. He became one of the founders of the Rosso band in 1968 but left the group before the release of their debut album to join the Stone Canyon Band, the team of Rick Nelson.

Singer, guitarist, and mandola and banjo player Bernie Leadon (born in Minneapolis, Minnesota, June 19, 1947) arrived in California in 1967 as a member of the group Hearts and Flowers. Later, he joined Dillard & Clark and then Flying Burrito Brothers.

Singer-songwriter and drummer Don Henley (born in Gilmer, Texas on July 22, 1947) moved to Los Angeles in June 1970 with his band Shiloh, which before breaking up released one self-titled album for Amos Records.

Finally, singer, guitarist, and keyboardist Glenn Frey (born in Detroit, Michigan, November 6, 1948) performed in his hometown before moving to El-Hey in the summer of 1968. He formed the duo Longbranch Pennywhistle with JD Souther, after which the two musicians signed with Amos Records and released an album under the same title in 1969.

In the spring of 1971, Frey and Henley were invited by country singer Linda Ronstadt to participate in the recording of her songs. Meisner and Leadon also collaborated with Linda as musicians during her summer tour. Thus, for the first time, four future "Eagles" gathered together on stage during the July show in Disneyland.

Soon after, the band joined together to record a new album by Ronstadt. The fateful meeting with Linda played an essential role in the biography of The Eagles. In September of the same year, the boys signed a contract with Manager David Geffen, agreeing to cooperate with the new music label Asylum Records. Soon after, they proclaimed themselves The Eagles.

In February 1972, the band flew to England with producer Glyn Johns for a two-week recording of their first album with the same name. In the summer of the same year, in June, the long-awaited debut took place. The album entered the top-20 and won gold just over a year and a half after its release. The most successful compositions were "Take It Easy," "Witchy Woman," and "Peaceful Easy Feeling."

During 1972 and until the beginning of 1973, The Eagles toured, and then returned to England to record the second concept album Desperado, dedicated to gangsters from the Wild West. For the first time, the guys used a photo of them all like the cover of the album. This had never happened before and did not happen ever after. The album, produced by Glyn Johns and released in April of 1973, became gold in less than a year and a half, and the single "Tequila Sunrise" entered the top 40.

After a tour to support the release of Desperado, The Eagles again began negotiating with Glyn Johns to record their third album. However, the desire of musicians to create more heavy music came into conflict with a preference of Jones to work on country-rock music as before. In this regard, the group dispersed with the producer after recording two tracks - "You Never Cry Like a Lover" and "The Best of My Love."

After a tour in early 1974, the band decided to hire producer Bill Szymczyk, who made the rest of the tracks for the third album called On The Border. Bill Szymczyk brought guitarist Don Felder (born in Gainesville, Florida on September 21, 1947), who impressed the rest of the band so much that he was persuaded to join The Eagles.

On the Border, the best-selling album of the three was released in March 1974. He became gold and was in the top 10 in June. The first single, "Already Gone," was in the top 20 that month. But the most successful song on the album, which attracted a stream of a new audience, was "The Best of My Love," released as a single in November. In February 1975, she became the number one hit on the charts, and a month later topped the pop chart.

The fourth record One of These Nights, released in June of 1975, brought the band even more significant success. The album went gold in the same month and No. 1 in July. Besides, it included singles that were in the top five - the title "Lyin' Eyes" and "Take It to the Limit." "Lyin' Eyes" won a Grammy Award in 1975.

The band went on a world tour, starting with the US and moving to Europe. But on December 20, 1975, it was announced that Bernie Leadon decided to leave the band. He was replaced by Joe Walsh (born in Wichita, Kansas, November 20, 1947). He immediately joined the tour, which continued in the Far East in early 1976.

The intense touring did not allow the band to return to the Studio, nor did they have any definite plans for a new album. In February 1976, The Eagles agreed to release a collection of the best songs. The success of the album was surprisingly swift; it occupied the first places in the international music charts for a long time.

Released in December 1976, 18 months after the launch of One of These Nights, the album Hotel California became platinum in one week, received the title of the number-1 hit in January 1977 and eventually sold more than 10 million copies. The singles "New Kid in Town" and "Hotel California" were major hits, and "Life in the Fast Lane" was in the top twenty. Besides, "Hotel California" won the 1977 Grammy as the Record of The Year.

The album itself was nominated for The Album of The Year and Best Pop Performance by a duo or group with vocal. The Eagles went on a world tour in March 1977, which began with a month in the United States, continued for a month in Europe and the Far East. At the end of the tour, in September, Randy Meisner left the band. He was replaced by Timothy B. Schmit (born in Sacramento, California, November 20, 1947), a former member of the Poco band, in which he had also replaced Meisner.

The band began to work on the sixth album in March 1978, and it took almost a year and a half to complete it. Long Run was released in September 1979. "I Can't Tell You Why" and "The Long Run" became the top ten hits. The single "Heartache Tonight" won a Grammy in 1979 for Best rock performance by a duo or group with vocals. In the American tour of 1980, the band recorded a live DVD, Eagles Live.

After the end of the tour, The Eagles stopped their musical activities but officially announced the breakup only in May 1982. All five members have released solo projects. During the 80s, the musicians received lucrative offers of reunification, but all together refused. In 1990, Frey and Henley again began to cooperate, in the spring they performed with Schmit and Walsh at charity concerts. Four years later the Eagles reunited.

In the spring of 1994, the band recorded a special concert for MTV and then launched a tour that lasted until August 1996. The MTV show was released in October, followed in November by an audio version of the album, Hell Freezes Over, which reached number one in the music charts. After that, The Eagles appeared together in January 1998 for performance in the Rock-n-Roll Hall of Fame.

On December 31, 1999, they gave a concert at the Staples Center in Los Angeles, which was recorded and included in the retrospective of the box set "Selected works: 1972-1999" in November 2000. Although the members of the band did not get on well together, and Felder was expelled from the lineup in February 2001. The protracted legal battle led to the fact that The Eagles were sold as a quartet, releasing The Best of the Best of the Eagles in 2003 and achieving minor success with the single "Hole in the World."

Felder's case was settled out of court in 2007. That same year, The Eagles returned with their seventh studio album, Long Road Out of Eden, which quickly became a multi-platinum album. In 2013, the group made a documentary film History of the Eagles and toured until mid-2015. Six months later, Glenn Frey fell ill and died on January 18, 2016. He was 64 years old.

A year after the death of the singer, guitarist and keyboardist Glenn Frey, The Eagles reunited again, and the musician's son Deacon took his place. Vince Gill also joined as guitarist and vocalist. The band participated in the classic West and Classic East festivals in July 2017 and then went on tour in 2018. At the end of the year, the entire discography of the team was packed in the "Legacy" set.

In the same year, it became known that the Recording Industry Association recognized "The Greatest Hits 1971-1975" as the best-selling album in the United States, ahead of Thriller by Michael Jackson by 5 million copies.

Now the musicians are preparing for a large-scale tour. On February 26, 2019, the band opened their world tour with a performance in New Zealand. Then, The Eagles went with concerts in Australia, Germany, the Netherlands, England, and other countries.

The tour ended on July 8 in Ireland. The team appeared in the following lineup - Don Henley, Joe Walsh, Timothy B. Schmit, Vince Gill, Deacon Frey, they performed their legendary hits, which have not lost relevance after almost half a century of existence of the team.