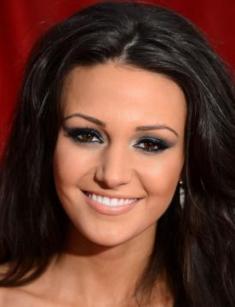 Michelle Keegan is a popular British actress and one of the sexiest women in the world. The future actress was born in Stockport, Greater Manchester, England. The girl’s parents divorced when she was 13; Michelle stayed wither mother who married again soon. As the actress told journalists, she inherited her exotic look from the grandmother born in Gibraltar.

Keegan went to St. Patrick's RC High School in Eccles and then continued her education at the Manchester School of Acting. As a student, the young woman worked part-time at Selfridges in the Trafford Center and a check-in counter clerk in the local airport.

Michelle’s golden hour took place at the end of 2007: she successfully auditioned for the British TV series Coronation Street; she surpassed 900 candidates. The artist personified Tina McIntyre for seven years until her character’s death.

Initially, Keegan’s character was supposed to be minor: a friend of the main character. Still, the audience liked her, and the actress enjoyed her first fame; producers offered her to continue. As a result, the audience could see Tina for seven years until 2014.

Although the project was popular, it did not bring Keegan the breakthrough. She took another significant role only recently.

In 2011, the men’s magazine FHM posted Michelle’s picture on its cover: she was naked, and there was only some soap foam on her body. The same year, the unknown young woman’s popularity increased so much that she got the 26th place in the magazine’s 100 Sexiest Women list. In March 2013, she reached the fourth position there.

In 2014, Keegan played the fairy Tinkerbell in the theater performance Peter Pan; she had a European tour with this project. The next year brought the series Ordinary Lies.

In 2015, FHM called the star the sexiest woman in the world; its readers believed her body shapes were perfect. Caitlyn Jenner (Keeping Up with the Kardashians) and the previous-year winner Jennifer Lawrence were also among the leaders.

The press has always followed the actress’s personal life. In 2006, the beauty started dating the actor Anthony Quinlan; they spent two years together and broke up. The new affair began in 2008: the model Brad Howard became her new boyfriend. Still, Michelle and Brad were not destined to be together for a long time: they split up in 2010.

Further on, the woman was dating the singer Max George from the boy band The Wanted. The romance was developing quickly: the musician gave Michelle a puppy as a birthday present and then proposed. Unfortunately, the couple had some disagreement and broke up in 2012.

In 2013, Keegan found her personal happiness with her colleague, the actor Mark Wright, the star of the series Power Rangers. The lovers always went out together and did not keep secret they were glad to do that.

Michelle and Mark married in May 2015; the wedding took place at St. Mary's Church, Bury St. Edmunds. 140 guests were present; the bride arrived at the ceremony by a retro car decorated with white satin ribbons.

2017 brought the mini-series Tina and Bobby about one of the most famous soccer players in the world, Bobby Moore, and his wife, Tina. 2018 was marked with the documentary series Who Do You Think You Are? and the comedy drama Strangeways Here We Come.

Sometimes, the actress is compared to other celebrities. For example, Michelle bears some resemblance to the Russian singer Nyusha.

Keegan not only works on movies and series but also actively participates in charity events. One could see her photos without makeup for the Children In Need campaign.