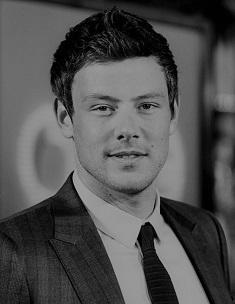 Cory Allan Michael Monteith was a Canadian actor and musician best known for his role of Finn Hudson in the TV series Glee. In spite of career success, fame and money, Monteith lost the struggle against his drug addiction and died at the age of 31.

Cory Allan Michael Monteith was born on May 11, 1982, in Calgary, Alberta to the family of Joe Monteith who worked for the military and Ann McGregor, an interior decorator. Cory also had an elder brother named Shaun Monteith. As a 7-year-old kid, Cory had to get through his parents' divorce. Monteith remained with his mother in Victoria, British Columbia and met his father sparsely. The divorce affected Cory hugely – he started facing social difficulties in school. At an early age, he got acquainted with alcohol and marijuana, began committing petty crimes such as stealing money from his family and friends in order to fund his addiction.

Having discovered Cory's problems, his family sent him to a rehabilitation program to rebuild his life. In 2011 Monteith eventually got his high school diploma. Totally, Monteith attended 16 schools, including alternative programs for troubled teens. Before turning to acting, he did various jobs, including working as a taxicab driver and a mechanist.

At the beginning of his career, Cory Monteith took up minor roles in TV serials such as Smallville, Supernatural, Flash Gordon, and Stargate Atlantis. In 2005 he was seen playing a leading role in the TV movie Killer Bash. 2006 brought her role in the supernatural horror movie Bloody Mary. Remarkably, the picture got majorly negative reviews. The same year, fans could see Monteith playing in the horror movie Kraken: Tentacles of the Deep.

Besides, he appeared as a minor character in the comedy Deck the Halls which happened to be a commercial and critical failure. The next picture Cory Monteith played in was Final Destination 3. Directed by James Wong, the movie was the third installment of the well-known Final Destination franchise. The project brought Wong money and fame.

2007 was marked by Monteith's appearances in different movies, including Hybrid, White Noise: The Light, and The Invisible.

In 2009 the actor succeeded to reach new height of popularity – he started playing the role of Finn Hudson in the musical comedy-drama series Glee. His character was the star quarterback of the high school football team, as well as a popular jock, who joins the musical club Glee. The series showed how the members deal with various issues such as sexuality, race, and social issues. For acting in the picture, he got lots of awards and nominations, including Emmy Award.

In May 2010, the cast of Glee embarked on a two-week live tour with stops in Los Angeles, Phoenix, Chicago, and New York City. The colleagues performed hits from the show and several skits between songs. The following May, they arranged a second tour with mostly new songs and all-new skits, performing for four weeks in the U.S. and Canada, and 11 days in England and Ireland.

Two years later, he was seen playing a leading role in the adventure romantic comedy movie Monte Carlo. Directed by Thomas Bezucha, the picture is about three friends who pose as wealthy socialites in Monte Carlo, Monaco. Made on a budget of $20 million, the project was a success commercially, earning nearly twice its budget.

Besides, Monteith appeared in the drama movie Sisters & Brothers and in the Glee: The 3D concert movie. It happened to be a commercial success, also earning twice its budget.

In 2012, Monteith was invited to the Ellen DeGeneres Show.

In 2013, Monteith acted in two pictures - All the Wrong Reasons and McCanick, as a protagonist. These were Cory’s final works before his death. Both the movies were released posthumously.

By the moment of Cory Monteith’s death, his net worth had been evaluated at $2 million.

Cory Monteith had a girlfriend - American actress Lea Michele, a Broadway star, who played his love interest in Glee. According to the media, they began their relationship in early 2012 and remained together until Monteith's death in 2013. There were rumors, the couple planned to get engaged and Michele was already going to become his wife. After his death, Lea released several songs about Cory, including "If You Say So", which Michele began writing a week after his death and references the last words he said to her, and "Hey You", a follow-up to "If You Say So", released in April 2017.

Before Lea, Cory had been romantically linked with Taylor Swift.

In his life, Monteith dedicated himself to charity. So, he supported such organizations as Virgin Unite, and Young Storytellers Foundation.

Monteith's lifeless body was found in a room on Floor 21 of the trendy Fairmont Pacific Rim Hotel in downtown Vancouver on July 13, 2013. He checked into the hotel on July 6 and had to check out on July 13. When he missed checkout time, hotel staffers came to his room and found his body. The cause of his death was stated to be "mixed drugs toxicity." Although he underwent rehabilitation March, Cory was unable to quit his drug addiction, which eventually led to his death.

Police claim Monteith was alone when he died, and there is no suspicion of a crime. But there were "others" with him in his room earlier on the night he died.

There was no funeral and Cory was not buried. So, his body was cremated in Vancouver on July 17, after a private viewing by his immediate family and girlfriend. Speaking about Glee cast’s reaction, on July 25, Michele and Glee creator Ryan Murphy arranged a celebration of life for Monteith in Los Angeles, attended by cast, band (including his best friend deceased Mark Salling), and creators of the show, as well as colleagues from the show's network and studio.