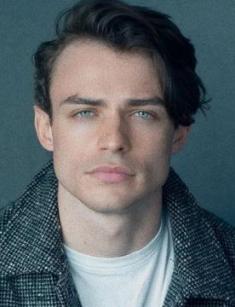 The filmography of the English actor and rising Hollywood star, Thomas Doherty, cannot boast a lot of movies. But after appearing in the second and third installments of the Descendants franchise, critics and fans do not doubt that the Scot will stay afloat and his skills will surprise viewers more than once.

The future Descendants star, Thomas Doherty, was born in April 1995 in the heart of Scotland, Edinburgh, under the Taurus zodiac sign. His parents have nothing to do with the cinematography or television: Doherty's father and mother are bank employees.

It is unknown why all three children have craved for the cinema. Thomas's brother Niall's and sister Rachel also chose acting as a profession.

Thomas Doherty started an acting career when the boy was five years old. The parents noticed the musical and acting talent of their son and developed them in every way. Thomas, who felt comfortable in front of cameras and strangers, was accepted into the leading Scottish music company, Lothian Youth Arts and Musicals Company. The Disney agents had no choice but to invite Thomas to play the leading role in the fairy tale movie Aladdin.

After graduating from Royal High School, Doherty chose his path without hesitation. He joined the ranks of the students of The MGA Academy of Performing Arts in Edinburgh, where he continued to improve acting skills. After graduation, he moved to London and signed a contract with Olivia Bell Management. Thomas continued to study acting, also developing his singing and dancing abilities.

For the first time, viewers saw the blue-eyed Scot in 2013, when the drama horror series Dracula, shot by American and English film companies, premiered. The adaptation of the novel by Bram Stoker first brought the novice actor fame. The creators of the project Cole Haddon and Daniel Knauff released the film in late October. The TV show was broadcast on NBC. Viewers were not enthusiastic about the project, and in May 2014 the film company refused to shoot the second season.

In November 2016, Thomas Doherty appeared in Kent Hughes's short film. However, it was the TV series The Lodge, released the same year in the UK, that made Thomas Doherty a recognizable actor. He learned to ride a mountain bike for his role in the project.

Thanks to the teen drama and the role of a guy named Sean Matthews, Thomas won the viewers' hearts and attracted a huge army of fans in his homeland. In the spring of 2017, the series was broadcast in the USA on Disney Channel and in Russia, and the actor gained world fame. Another English star, Sophie Simnett, also became famous. The girl played the title role of 15-year-old heroine Skye.

After completing his work on The Lodge, Thomas Doherty received an invitation from the producers of Disney Channel. The Scotsman was offered to play the son of Captain Hook, Harry Hook, in the second installment in the Descendants franchise. Doherty auditioned and landed a starring role in the family adventure and musical fantasy movie.

Kenny Ortega's musical Descendants 2 premiered on Disney Channel in the summer of 2017. In the sequel, viewers saw the previous cast from the 2015 franchise. It featured such favorite actors of the first installment as Dove Cameron, Cameron Boyce, and Sofia Carson.

In 2018, Thomas Doherty's fans saw the favorite actor in the American version of the movie High Strung: Free Dance, which was shot by director Michael Damian. The Scotsman appeared in the film as Zander Raines. Harry Jarvis and Juliet Doherty starred with him.

In 2017, Thomas Doherty was named one of the 50 hottest boys in the world by Vogue magazine. The actor is 6 feet (183 cm) tall, weighing 169.75 lbs (77 kg). He has an athletic body, blue eyes, and wavy brown hair. The famous Hollywood projects have turned the actor into an eligible bachelor, who attracts the attention of well-known beautiful ladies. The star's personal life is in the focus of attention of millions of fans.

Doherty met a charming American actress and singer, Dove Cameron, on the set of Descendants 2. Soon she was called Thomas's girlfriend. It is not known whether the Scotsman is going to marry her or the love affair will be short-lived. Nowadays, they enjoy each other's company and do not talk to annoying journalists and fans.

The photo of the smiling celebrity couple appeared on the actors' Instagram pages. The pictures leave no doubt that their romantic feelings are real.

Dove had previously dated her partner in the project Liv and Maddie, Ryan McCartan. Although the relationship almost turned into a marriage (Dove and Ryan announced their engagement), after an unexpected breakup, Cameron called the relationship terrible.

Soon, the girl appeared together with Thomas. The couple held hands and exchanged glances. Paparazzi repeatedly took the pictures of the lovers during romantic walks around the city.

In 2019, fans will see the third film of the Descendants franchise. They began shooting in the spring of 2018 in Vancouver, then moved to British Columbia and Canada. Like the previous installments, the sequel was filmed by Kenny Ortega. The script for the musical was also written by Sara Parriott and Josann McGibbon.

Disney Channel announced the premiere in August 2019. The third part of the franchise was the last movie for actor Cameron Boyce who died in July 2019.

Another film, which starred the famous Scotsman in 2019, was the comedy High Fidelity. He appeared in the movie with Zoë Kravitz and David McElfresh.

Now the young man is acting in the TV series Catherine the Great. The British biopic about Empress Catherine II, the coup, the years of her reign and the era of enlightened absolutism will be released, presumably, in 2020.

Director Philip Martin invited Georgina Beedle, Andrew Rothney, and Thomas Doherty to play the title roles. The actor will portray Peter Zavadovsky, the official secretary, the favorite of the empress, and the first minister of education.

Thomas Doherty's net worth is estimated at $1 million.