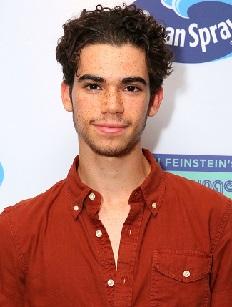 Cameron Boyce is a young famous American dancer and actor mostly known for starring in the movies Mirrors, Eagle Eye, Grown Ups and Grown Ups 2. Besides, his roles of Carlos in the Descendants television movies (which is famous for its song «Chillin' Like a Villain»), of Luke Ross on the Disney Channel comedy series Jessie, and of Conor on the Disney XD series Gamer's Guide to Pretty Much Everything also made him popular.

So, there is a question – how did Cameron Boyce come to fame? You’re going to now right now!

Cameron Boyce was born on May 28, 1999, in Los Angeles, California, the USA to the family of Victor Boyce and Libby Boyce.

Cameron Boyce is of mixed nationality. So, his dad is an African American and his mother is Jewish. Interestingly, Cameron's maternal grandmother, Jo Ann (Allen) Boyce, is one of "The Clinton 12", the twelve African American teens who were the first students to study at a desegregated southern public school, Clinton High School, in 1956.

During the celebration of Black History Month, Cameron was invited to Disney's featurette ''Be Inspired'' where he told in public about his personal connection to the historic event. In the video viewers can see him visiting for the first time ''The Clinton 12'' bronze sculpture in Clinton, Tennessee, with his father, mother, sister and grandmother.

When he was young, Boyce already understood what exactly he wanted from this life – performing and being popular. As time passed, this his passion was growing and led him to there he is now.

May 2008 was marked by Boyce's television debut – he appeared on the Panic! at the Disco music video, "That Green Gentleman (Things Have Changed)." There Cameron played a kid version of the guitarist Ryan Ross. Shortly after, the celebrity acted in recurring role of Michael "Stone" Cates Jr., on the nighttime soap opera General Hospital: Night Shift. Several months later, fans could see the actor with a co-starring role in the horror film Mirrors and in the mystery-thriller film Eagle Eye.

The next year, Cameron Boyce made a cameo in a Burger King commercial, showcasing the movie Transformers: Revenge of the Fallen. Boyce, three other children, and Autobots Skids and Mudflap wait for Bumblebee to transform, which ends up being just a regular Camaro. The kids walk away disappointed, where Skid says,

In June 2010, Cameron appeared as Keith Feder, the spoiled son of Adam Sandler's character, in the comedy film Grown Ups, and performed later that same year showing off his dance skills on the web series entitled The Legion of Extraordinary Dancers.

In April 2011 Cameron was invited to the Disney Channel Good Luck Charlie. Besides, the same month he took part in a Royal Wedding tribute on Dancing with the Stars. That year Boyce acted as one of Judy's classmates in the family comedy movie Judy Moody and the Not Bummer Summer and in August he was one of the featured dancers on the Disney Channel series Shake It Up.

September 2011 was marked by Boyce's main role on the Disney Channel comedy series Jessie - he acted as Luke Ross. Initially, when Boyce applied for the audition, this role was originally intended to be played by a boy named Hiro adopted from Korea. However, Boyce managed to impress the judges by his talent and abilities and got the role.

In 2013 Boyce starred on the Liv and Maddie.

In 2015, Boyce played Carlos, the son of Cruella de Vil, in the Descendants television movies. He later reprised the character for the animated shorts Descendants: Wicked World and in the 2017 sequel Descendants 2.

In 2016, the star had a guest role on Code Black. In March 2018, Boyce was shown in the comedy television pilot, Steps, in the role of Becker.

Cameron believes in hard work and has already achieved a lot in the entertainment industry, in spite his age. An entertainer since childhood, he discovered his love for performing when he learned to dance – as a kid. Once in an interview, Boyce said that he had been dancing for as long as he could remember, and now he funnels his energy and spirit through dancing. Cameron, a passionate dancer, has trained in many dance styles, including hip-hop, modern, jazz, tap, and ballet. However, break dancing is his favorite one, and he even formed a dance crew, "X Mob," along with four of his friends.

Cameron has shared with journalists that he had developed a lifelong friendship with his crew mates. He is also very close with his co-stars and often posts pictures with them on his social media sites.

Cameron’s net worth is evaluated at $5 million. However, his salary per episode is still a confidential information.

Besides working in a show-business, Boyce dedicates himself to charity work. So, in 2014, he helped raise over $27,000 for the Thirst Project, which helps bring clean water to underdeveloped countries.

Cameron has a long list of relationships. There have been rumors that Cameron had dated his co-star Peyton List for a few years. He has also been linked with Madison Pettis, Sofia Carson, Sophie Reynolds and Brenna D'Amico. A website reported on October 26, 2016, that Cameron had been the target of an online death hoax spread on Facebook. However, the actor's representatives confirmed that he was doing well.

Nowadays, the celebrity lives in Los Angeles with his parents and younger sister Maya. He has a pet dog named Cienna.

In his spare time, he likes to design his own shirts and caps. Besides, Cameron is keen on experimenting with his appearance. So, he one of the biggest changes in him was when he dyed his hair blond.