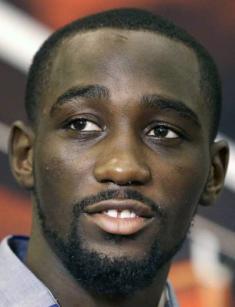 Terence Crawford is an American boxer whose invincibility frightens even experienced rivals. The athlete has performed in the lightweight, light welterweight, and welterweight categories and gained multiple prizes and titles; he is currently the WBO welterweight champion.

The future sportsman was born on September 28, 1987, in Omaha, Nebraska. He grew up with two sisters, Latisha and Shawntay.

Many family members were engaged in amateur boxing: the father, grandfather, cousins, and uncles; there is little wonder the boy followed the same path at the age of seven.

However, there was another reason: Terence needed to protect himself. One day, his relative was stabbed to death by his girlfriend; it was a great shock for young Crawford. Thus, he felt vulnerable and tried to do everything he could to regain a sense of safety.

The young man went to Bryan High school and continued to box there. A gym became a second home for him; he practiced a lot and polished his skills perfectly.

As an amateur, Crawford had 70 matches and lost only twelve; by the way, he defeated the would-be world champion Danny García. Terence could have participated in the Olympic Games in Beijing, but the failure against Sadam Ali prevented him from doing that.

In March 2008, the sportsman successfully debuted on the professional level and stood against his compatriot Brian Cummings. The early period in Crawford’s career was connected with the lightweight division.

Further on, he defeated the Italian Filiberto Nieto and Travis Hartman; the chain of brilliant victories followed. In 2013, fans watched their favorite fight against the ex WBO champion Breidis Prescott. The same year brought another significant achievement: the man surpassed the Russian colleague Andrey Klimov, who had never been defeated before.

In March 2015, Crawford switched to the light welterweight division and became a candidate for the WBO title at once. He faced the Puerto-Rican athlete Thomas Dulorme and gave him a technical knockout in the sixth round, winning the victory. The next opponent was powerful: Dierry Jean had had only a single loss before, but Crawford proved to be stronger. Further on, the champion defeated Hank Lundy, Viktor Postol, and Félix Díaz.

October 2017 brought the news about Terence’s transfer to the welterweight category: the man did not limit himself with the old achievements and felt like moving forward. The first match occurred on June 9, 2018, against Jeff Horn; once again, Crawford was on top and earned the WBO welterweight title. José Benavidez Jr. and Amir Khan could not strip him of it and in 2018-2019.

Terence Crawford is a happy husband and father. His wife’s name is Alindra Person; they have two sons and three daughters together.

In February 2019, the couple was involved in an unpleasant situation: the suspended British boxer Tyan Booth fat-shamed Alindra and started a thread about what kind of women a sports celebrity should date.

Colleagues’ and boxing fans’ reaction was negative; Twitter had Booth deleted. Crawford was laconic and neat: he wrote on his page: “We do have passports”, suggesting he could talk to the offender face to face.

2019 was marked with two successful title defenses in the athlete’s record. In April, Crawford defeated the British boxer Amir Khan in the first round. The victory over Egidijus Kavaliauskas in December was equally victorious: it took Terence only 44 seconds to crush his opponent. The commentator Andre Ward emphasized Crawford did not fight according to the plan.

The athlete has an online store on his personal website; fans can purchase apparel from the shop.

Box lovers are looking forward to the sportsman’s meeting with Errol Spence, who had had a car accident but confirmed his participation in the match. The event is scheduled for 2020.

Terence Crawford’s net worth is $6 million in 2019. Rumors have it his purse got $5.5 million in the match against Khan, according to the contract.