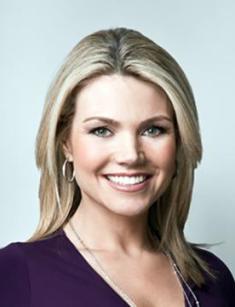 Heather Nauert is a charming blonde, one of the brightest stars of American television. She was born on January 27, 1970, in Rockford, Illinois. At first, she studied at independent colleges for women. Then Heather attended Pine Manor College in Massachusetts and Mount Vernon College for Women (now part of The George Washington University), where she earned her Bachelor of Arts degree in communications. Then she graduated from the journalism school of Columbia University.

In 1996 she began her career in journalism. From 1998 to 2005, Heather worked as a correspondent for Fox News. In 2005, she was offered to work as an ABC News correspondent, contributing to World News, Good Morning America, Nightline.

She received an Emmy Award (the equivalent of an Academy Award) for her brilliant work on the special series 13 Around the World.

In 2007, she returned to Fox News and worked as a host of the newscasts Good Day Early Call and Good Day New York Wake Up for Fox Broadcasting Company owned-and-operated station WNYW in New York City.

Later, Heather Nauert became a Fox News anchor and hosted the program Strategy Room on Fox News.com, as well as the newscast The Big Story.

Nauert is a member of the Council on Foreign Relations.

According to Bloomberg, Heather Nauert will be the new State Department Spokesperson. She will replace John Kirby (he was Spokesperson for the United States Department of State during the presidency of Barack Obama from 2015 to 2017). Jen Psaki also held this position from 2013 to 2015, then she became a communications director and stayed through the end of the Obama administration. Jen became famous for her knowledge in the field of geography, as well as accusations of Russia's foreign policy.

In 2016, after the end of the Obama administration, the State Department Spokesperson’s briefings were temporarily stopped. When Donald Trump came to the White House, they resumed and were held by the acting US State Department Spokesman, Mark Toner. He followed the tradition of his predecessors, accusing Russia of breaking the agreement on the elimination of intermediate-range and shorter-range missiles.

It is not surprising that Heather Nauert was appointed as the State Department spokesperson. As a Republican, she has always supported Donald Trump. Donald Trump, in turn, has repeatedly been sympathetic to the creators of the program Fox & Friends, which was hosted by Nauert.

The journalist even supported the President's daughter Ivanka Trump when the latter had a conflict with the Nordstorm chain. After the retailer’s refusal to sell goods of Ivanka Trump’s line, Heather Nauert wrote on Twitter that Ivanka's shoes and accessories were beautiful and she "will buy several pairs of shoes and wear them on the next program."

There is little information about Heather Nauert's personal life. The journalist has not been involved in scandals and love affairs. She devoted all free time to her career and did not marry before age 30.

In 2000, Heather Nauert married Scott Norby, a banker, who worked at Goldman Sachs, one of the world's largest investment banks.

As for Heather Nauert's hobbies, it is known that her shepherd dog won one of the most famous American dog shows.

Heather Nauert has a net worth of $3 million.