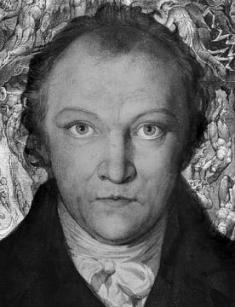 You can only see the big picture from a distance. These words by Sergei Esenin fully characterize the attitude of contemporaries and descendants to William Blake. Only in the 20th century, the artist, poet, and philosopher was awarded the title of an outstanding figure of English art and literature. During his lifetime, he was considered possessed by the devil.

Blake's primary source of creativity was the Bible. But the author of the symbolic Great Architect of the Universe, who lived in the era of scientific breakthrough, did not like any Church and eventually created his own mythology – a combination of the principles of Enlightenment with religious dogmas.

William Blake was born in London in November 1757 and lived all his life in the British capital, not needing the external influence of the environment – the master was content with subjective experiences.

William owes his life to his parents, who did not restrict their heirs' freedom. Blake's father kept a shop in Soho where he sold fabrics. The mother raised children, they had seven of them, but two died in their infancy. The family was quite educated for the time, though with some peculiarities. When it came to books, the family read the works of the naturalist Emanuel Swedenborg and the mystic Jakob Böhme. Blake's passion for drawing began with reproductions of paintings by Albrecht Dürer, Michelangelo and Raphael, which were purchased individually for his son.

At the age of ten, William went to art school, then worked part-time in an engraving workshop, while studying ways of drawing on hard surfaces. Sketches in Westminster Abbey brought love for religious motives and Gothic direction to the heart of the future genius.

In 1778 Blake entered the Royal Academy of Arts but did not graduate. The reason was the young artist's rejection of the eclectic style preached by teachers and the desire to drive students into a strict framework. The young man turned out to be closer to classic High Renaissance. Leaving the walls of the Academy, William began to earn money by making engravings from other people's drawings. Blake gave 40 years of his life to this art form.

In 1784, having inheritance after his father's death, William, brother Robert, and partner James Parker opened a printing house that produced book illustrations.

In the paintings of William Blake, in addition to religion, there is a craving for mythology and symbolism, bordering on fiction. The artist drew parallels between the Holy Trinity and the union of faith, imagination, and art: in both of these things, parts do not exist separately.

To decipher the messages hidden in the pictures, the viewer will need knowledge about the time in which the Creator lived, and the Holy Scripture. According to legend, William saw God in early childhood. As he grew older, he talked about the angels clinging to the tree. Later, voices joined the visions. This may have prompted Blake to invent illuminated printing, in which the image was accompanied by poetry.

The works of the famous Britt have peculiar isolation of volumes and forms, sometimes bright graphic, violation of accepted laws of composition. An example of this is the illustration of The Book of Revelation.

The Apostle's Scripture told the story of the devil's number 666, the four horsemen and beast of the Apocalypse, the whore of Babylon, and the second coming. It is not surprising that such a colorful narrative pushed many artists to the visual embodiment of the characters.

Blake presented his vision. In 1805 and 1810 he wrote two versions of The Great Red Dragon and the Woman Clothed with the Sun. The first painting is stored in the National Gallery in Washington, the second – in the Brooklyn Museum. In both, the monster's body immediately catches the eye, but the main character, if you follow the content of the Apocalypse is a woman depicted at the bottom of the canvas, personifying the Church for some people, and for others – the virgin.

According to William, "the light of other worlds" helped him in the creation of Jacob's Ladder, or Jacob's Dream. The Central figure of the painting Glad Day or Dance of Albion is a mixture of the image of Christ and a Vitruvian man. Using watercolors and ink in 1805, Blake painted a surprisingly subtle, almost monochrome work, Christ in the Sepulchre, Guarded by Angels. Adam Gives Names For The Animals exhibited at the Pollock Museum in Glasgow, was created on a wooden Board in the tempera technique.

The second name of the painting The Great Architect is The Creation, refers to God in world religions. The author gave him the name Urizen. The engraving is an illustration of the book Europe a Prophecy. In Blake's mythology, Urizen is the bearer of a negative, black force that seeks to make humanity uniform, because he measures something with a compass for a reason.

Considering the painting Hecate, psychoanalysts see it as the space-claim and confusion. At the same time, critics see it as another violation of the canons of the academic painting. The goddess of witchcraft is depicted as three separate figures instead of the traditional ones connected by backs. And everywhere there are secret signs: the owl is thought to be a symbol of wisdom, and later of evil, the insidious serpent symbolizes knowledge and refers to Hecate herself, looking the tempter in the eye, but keeping the hand on the Bible.

William Blake's poetry and prose, according to several experts, also brake the generally accepted rules, this time –the rules of English writing. Nevertheless, for two centuries fans of romanticism read it voraciously and quote it, turning his quotes into witty sayings:

"The weak in courage is strong in cunning."

"Any question asked has an answer."

It is believed that William was ahead of his time in the understanding of human nature. Moreover, researchers of Blake as a poet marked features of psychoanalysis, which was spread a hundred years later.

The first collection of poems called Poetical Sketches was published in 1783. Then came out the optimistic Songs of Innocence and then Songs of Experience marred by the bitterness of reality. William designed illustrations for the books himself, and eventually united both of these works into one, as a symbol of the opposite states of the soul. The poem Infant Joy was contrasted with the image of The Sick Rose. The Echoing Green was compared with A Poison Tree; The Lamb with the Tyger.

The Marriage of Heaven and Hell is a peculiar answer to the questions indirectly asked in the poem about Adam Paradise Lost by poet and thinker John Milton. William released the cycle of watercolor paintings as illustrations to the book. The highest ability inherent in man, imagination, according to Blake, is given by Hell.

Paradise represents rationality and order. Evil becomes a force that changes the world, and Good in the traditional sense is passive and reactionary. But they cannot exist alone, and only their unity, that very "marriage" gives birth to a complete, spiritual personality.

Being baptized by the Church of England, William Blake resisted religious dogmas, ridiculed submission and repentance. On the other hand, the poems On Another's Sorrow, and The Divine Image is a hymn to the presence of God in the life of each person, in joyful and sad moments.

In William Blake's own life there was far less searching and tossing than in the creative one. With his wife Catherine Blake, the poet met at a time when he was experiencing the collapse of the previous relationship – the girl refused to marry him. Blake was married to his beloved in 1782.

In his wife, William found a loving and faithful friend, who was sympathetic to the fact that her husband

was rich in his soul and had a sharp mind, but was poor when it came to money.

Catherine, who could not even sign a marriage certificate, under William's supervision, learned to read and write, to do engravings. The woman became the inspirer of Blake in the times of failure and came to help in illustrating books.

William Blake died on August 1827 in poverty. Until his last days, the artist worked on illustrations for the poem Divine Comedy by Dante Alighieri. To this work of the Italian thinker, Blake devoted a total of 102 drawings, as well as many sketches.

Like Wolfgang Amadeus Mozart, the last resting place of the British genius was a common grave at Bunhill Fields cemetery in London. After World War II, the authorities decided to make a park on this site. Since the exact place of burial was unknown, the authorities put a memorial plaque on which they wrote that "nearby are the remains" of Blake and his wife.

In the 21st century admirers of William spent two years to establish the specific burial place. Ancient Church books and the knowledge of modern landscape designer Carol Garrido came to the rescue. Exploring every centimeter, the enthusiasts found the exact spot.

London Blake Society announced a collection of donations for the monument to the poet; people donated almost $ 40 thousand. In August 2018, lovers of romanticism found a place of pilgrimage. On the grave of William Blake, there is a white marble slab with the name, dates of life and death and the inscription: "Poet. Artist. Prophet." The Guardian published photos of the headstone.

"Engraving is a craft that I learned; I should not have tried to live by other work. My heaven is copper, and my earth is iron."

"My works are better known in heaven than on earth."

"Life is an action and comes from the Body, and Thought is attached to the Action and serves as its shell."

"You risk losing the whole by spending too much time on trifles."