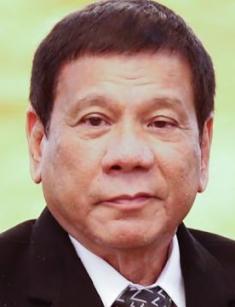 Rodrigo Roa Duterte has been President of the Philippines since June 30, 2016. The Western press has called him the "The Punisher," and the local newspapers affectionately call him Rody. He is a professional lawyer who has built a political career for more than two decades. For a long time, Duterte served as mayor of Davao City, located on the island of Mindanao.

Rodrigo is famous for heavy-handed policy; he often resorts to violence and pursues a policy that separated the Philippines from Europe and the USA. President Rodrigo Duterte has repeatedly expressed his sentiments in an insulting manner, using obscene language.

Rodrigo was born in the spring of 1945 in the city of Maasin, which is located on the island of Leyte. His mother Soledad Roa was a teacher, and his father, Vicente Duterte, a professional lawyer, began subsequently to build a political career. Vicente was mayor of Danao, and then became the provincial governor of Davao province. Rodrigo has two sisters. The future President studied well in elementary school, but in his teens, he distinguished himself with explosive behavior. The biography of Rodrigo Duterte states that he was expelled from school twice for poor behavior, aggression, and insults against not only classmates but also teachers.

Nevertheless, the young man managed to graduate from the Holy Cross College of Digos and even enter the prestigious Lyceum of the Philippines in Manila, where the young man graduated with a Bachelor of Arts degree. Later, Duterte also obtained a law degree from San Beda College of Law. As a lawyer, Rodrigo was promoted to the position of Assistant City Prosecutor in Davao City, after which he decided to follow in his father's footsteps and took up a political career.

Before becoming President, Rodrigo Duterte had held several less significant positions. After the Yellow Revolution of 1986, he became vice mayor of Davao City, and two years later he was already mayor of the city. The people respected him very much and repeatedly re-elected continuously. By the way, it was Rodrigo who set a precedent by designating deputy mayors that represented two different Filipino peoples, which was later copied in other parts of the country.

When Duterte was term-limited to run for mayor, he ran for the House of Representatives. But in 2001 he ran for mayor again and was elected. Moreover, the wan was re-elected three times. As mayor, Duterte began to wage a tough war on drugs and drug addiction. He built a rehabilitation center, and also announced that he would pay a lot of money to anyone who wanted to give up drugs. Rodrigo financially assisted the victims of typhoon Haiyan, sending rescuers and doctors to the victims. Besides, he is considered an active supporter of women's rights, and therefore stands well with feminist organizations.

The rigid, tough spirit manifested itself in adulthood. Duterte introduced an anti-smoking ordinance in Davao City. When he learned that one of a tourist was violating this ordinance, Duterte came to the bar and forced the visitor to swallow a cigarette butt. Mayor and President Rodrigo Duterte was also connected with vigilante groups known as Davao Death Squad.

These group killed alleged criminals, primarily drug dealers, without trial or investigation. The corpses were then thrown out of the city. Rodrigo still believes that the best measure to combat organized crime is summary execution. For such statements, he was repeatedly criticized by the Philippine Commission on Human Rights.

In the summer of 2016, the mayor became President of the Philippines. He officially declared war on drugs, promised extrajudicial killings throughout the country, and could use obscene language while speaking in public. Duterte faced criticism from the United States and Europe again. The man replied to it saying in a rather aggressive way that he was considering withdrawing the Philippines from the United Nations, called the U.N. Secretary-General "a fool," the European Union "a purgatory," and also told U.S. President Barack Obama where to go, offending his mother. Duterte officially apologized to Obama the same day but did not eat his words.

Duterte considers Russian President Vladimir Putin and general secretary of the Communist Party of China, Xi Jinping, to be his ideological allies. Not everyone likes Rodrigo's stance. In November 2016 there was even an assassination attempt planned against him. The cortege with the President's guards was attacked shortly before his visit to the city of Marawi. The Maute, a terrorist group, affiliated with I.S., is likely responsible for the attack. Duterte planned to take this road later. The President showed courage, saying that he was not going to cancel the trip and did not even intend to change the route.

Rodrigo Duterte has officially had only one wife. In 1973, he married Elizabeth Zimmerman, who gave birth to six children.

The oldest daughter, Sara, became the successor of his father as mayor of Davao City. After 27 years of marriage, Rodrigo and Elizabeth's family broke up. The couple divorced through a civil court action, which allowed the ex-spouses to live separately. Later, Rodrigo Duterte's wife was diagnosed with stage 3 cancer. The woman underwent chemotherapy, and doctors continue to treat her.

Nowadays, Rodrigo Duterte is officially considered a bachelor, but he is currently living with his common-law wife Cielito Avanceña, a nurse, who gave birth to his seventh child, daughter Veronica. In the family, they call the girl Kitty.

Rodrigo Duterte has a net worth of P28.54 million.