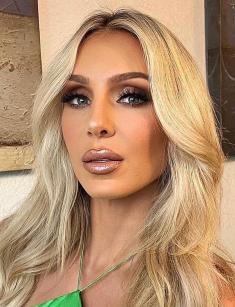 Ashley Elizabeth Fliehr, who was born on April 5, 1986, is a North Carolina-born American wrestler and Ric Flair's daughter. She is known by her nickname, Charlotte Flair. Ashley is signed with World Wrestling Entertainment. She debuted back in 1993 with an appearance in World Championship Wrestling, and in 2012 she started working with WWE.

Ashley came from a well-settled family in the city of Charlotte, which is located in North Carolina. Her parents are well-known wrestler Ric Flair (his real name is Richard Fliehr) and Elizabeth Harrell. Ashley spent her childhood with two siblings: Megan and David (who passed away in 2013). She studied at a public high school and then attended a state university in North Carolina.

At the age of seven, Ashley made her debut in professional wrestling, sharing a scene with her father at the WCW pay-per-view Starrcade '93: 10th Anniversary. Ashley received a developmental deal with WWE on May 17, 2012, and worked with Lodi in North Carolina before joining NXT, WWE's developing division. Ashley participated in an eight-woman tournament in 2014 for the vacant NXT Women's Championship, defeating Natalya in the finals at TakeOver on May 29 and Emma in the first round to win the title for the first time in her career and her first WWE championship.

Stephanie McMahon demanded a "revolution" in the Divas division during the July 13 episode of Raw, which resulted in the introduction of Ashley's roster. While Banks sided with Tamina and Naomi to spark a rivalry between the three teams, Ashley sided with Paige, who conflicted with Team Bella. The letters of each wrestler's first name were used to give the trio—Charlotte, Lynch, and Paige—the moniker "Team PCB." Ashley was chosen by Becky Lynch to replace her in a 2018 match against Raw Women's Champion Ronda Rousey on November 18 at Survivor Series.

Ashley was married three times. Her spouses were Riki Johnson (from 2010 to 2013) and Thom Latimer (until 2015). Her current husband is Andrade El Idolo; they married in 2022. Ashley loves tattoos; she has some on her body. She still has no kids. She was arrested once for assaulting a police officer, by the way. That happened in 2008 when she started fighting with her boyfriend and her dad.

Ashley has appeared in a few films and television shows. Here they are all:

Here is the list of achievements that Ashley received throughout her career: