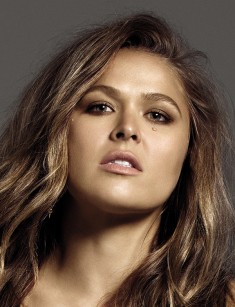 Ronda Rousey is the American athlete, MMA wrestler, former Strikeforce champion, and the first UFC champion. Rousey has become one of the best fighters outside weight categories. She is also number one in the Bantamweight rating.

In February 1987, the professional judoist AnnMaria De Mars gave birth to the daughter Ronda Rousey. The girl was the youngest kid in the family and had two elder sisters. Ronda’s parents belonged to different people; the woman has Venezuelan, African, English, and Polish roots.

For a long time, Ronda was unable to talk normally: doctors found out she had verbal apraxia, the neurological disorder caused by an umbilical cord wrapped around the neck during the childbirth. To work with a speech therapist, the family moved to North Dakota.

Ronda’s childhood was not happy. When she was eight, her father broke his spine when he was dog sledding. The man did not want to live as a disabled person and committed suicide.

Later, Ronda’s mother married again; the stepfather worked as an aerospace engineer. When the children grew up, the mother entered the University of California and became an educational psychologist.

Ronda Rouse began her professional career when she was young. The first official fight against Hayden Munoz took place in New Mexico. Ronda put her opponent in an armlock in 23 seconds. On average, Rousey spent 3-4 minutes to defeat her rivals in her first seven fights: these results were recording.

Experts believe Rousey successfully uses the wrestling technique during fights: she has been brought up as a professional. Young Ronda mastered using armlock, so that she could finish fights quickly. This trick became her trademark. Overall, Rousey had 12 MMA fights and won nine of them due to her armlock.

In November 2015, the wrestler participated in the decisive fight in Melbourne: it was the moment when the UFC champion would be identified. Holly Holm became Ronda’s opponent; neither of the wrestlers had ever lost a fight before.

Rousey’s opponent was going to become the champion for the seventh time, but something went wrong. Bookmakers were accepting bets and predicted Ronda’s victory. It was a classic scheme: Rousey was gradually increasing the pressure. She wanted to win in the first round and used her signature tactics.

However, Holly Holm was a hard nut to crack: due to her boxing technique, she was capable of preventing attacks. By the end of the first round, Holm managed to damage her opponent. The things heated in the second round. Holm’s powerful punch on the jaw turned out to be crucial. Rousey was knocked down but tried to stand up; Holly gave рук a high-kick, and the knockdown followed. The referee stopped the fight.

The minutes were ticking by, but Ronda did not come to her senses. It was her first knockdown throughout her career. The woman was sent to a hospital; tomography confirmed there were no traumas and damage.

The athlete did not plan to come back to fighting but returned in the next year. On the New Year Eve, she faced Amanda Nunes. A year ago, Holm had to give the title of the champion to Miesha Tate who lost to her next opponent Nunes.

Amanda’s blows were powerful. Ronda was parrying them and tried to counteract, but Nunes continued to attack. Soon, Rousey was groggy, and the referee decided to stop the fight which lasted for 48 seconds.

In 2013, Ronda accepted Sylvester Stallone’s invitation and played in the movie The Expendables 3. The woman got the role of Luna, a nightclub bouncer and recruit.

Later on, Rousey took part in Furious 7 where she played the security chief.

In 2016, Rousey was invited to Road House, the remake of the movie starring Patrick Swayze.

There were many rumors about Ronda’s personal life; the wrestler kept denying them. In fall 2015, everything changed: Rousey met the man of her life, her colleague Travis Browne who was a UFC heavyweight. The couple did not want to hide the relationship and announced they were dating soon. On August 26, 2017, the athletes married; friends and family were the guests.

Ronda Rousey has her own Instagram page where she posts photos and videos of pets including her dog and romantic pictures with her husband. Printed media often publish the athlete’s photos, some of which are nude.

Today, the former UFC champion has opened the new stage of her sports career.

In November 2017, the woman participated in the World Wrestling Entertainment where she and her team members Sasha Banks, Charlotte Flair, and Becky Lynch collaborated. 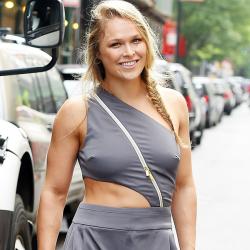