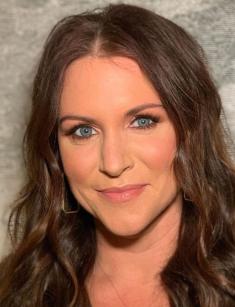 Stephanie McMahon is an American wrestler and business lady of Irish origin.

The future celebrity was born on September 24, 1976, in Hartford, Connecticut. Soon, her family relocated to Greenwich.

Her mom's name is Linda. Her dad's name is Vince. Both are wrestling promoters.

This lady has an elder brother, Shane.

Stephanie has a bachelor's degree in communications. She's equally good at intellectual work and physical exercise, such as boxing or doing bench press.

When Stephanie was 13 years old, she began to work as a model for the catalogs of the World Wrestling Federation (WWF). After graduation, she switched to full-time work in this company. Plus, she worked for WWE (E stands for Entertainment).

At various periods of her life, Stephanie was in charge of the following types of activities for this business: creative design, TV production, creative writing, managing talents, branding, live event booking, marketing, social media, digital media and launching the WWE app as well as relations with advertisers, journalists, partners and investors.

In 2022, Stephanie announced her plans to quit the business and concentrate on her family life. However, in one month, she was appointed the Chairwoman and CEO of WWE. Soon, her dad stepped down from his top-managerial roles in the organization because of sexual misconduct allegations. His daughter and her husband officially substituted him in the positions that he had occupied. Stephanie became the WWE Co-CEO and Chairwoman.

In the first days of 2023, Business Insider announced: "Stephanie McMahon resigns after her father's return to the company".

Stephanie devoted two decades to this sports discipline: from 1999 to 2018. She debuted as her real father's daughter. She took part in many fights and adrenaline-fuelled plot twists.

She appeared on the screen alongside such stars as Chris Jericho, John Cena, Alexa Bliss, AJ Lee, Andrew Martin, Brie Bella, Brock Lesnar and CM Punk. She knows well such prominent figures of the industry as Andre The Giant, Macho Man and Brett Lauderdale.

In 2020, this lady had a scripted romance with Triple H (real name Paul Levesque). They genuinely liked each other and started a romantic relationship in real life. In 2023, the couple tied the knot.

According to some sources, Stephanie's husband began to date her before having officially split up from his previous partner, known under her Chyna alias.