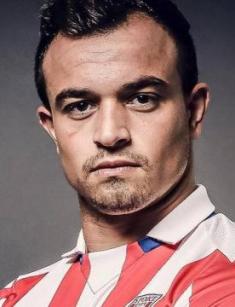 As a teenager, Xherdan Shaqiri was already named the best player of the youth tournament. When he joined the Swiss national team, the striker instantly became the team leader. Shaqiri is always confident on the field. Coaches think that his composure contributes to the football player's professional success. It does not matter who plays against him, and the young man reacts quickly to any situation.

The future footballer was born in the city of Gjilan, Yugoslavia. But at the age of one, he and his parents, Kosovo Albanians, moved to Switzerland. A large family of immigrants (besides Xherdan, the parents raised four more children), fled war and settled down in this European country of great opportunities.

Young Xherdan became interested in football. The 8-year-old boy enrolled in the football school in Augst, and then the future star transferred to the FC Basel, where he first played for the youth team. When the teenager was 15 years old, he experienced the first glory. Shaqiri was named the best player of the Nike Cup tournament. He received offers from famous football clubs, but the Albanian preferred to play for the native FC Basel.

In the winter of 2009, Xherdan Shaqiri finally joined the ranks of the first team of the Swiss club. He made his debut in the match against FC St. Gallen. The player scored his debut goal for Basel in late autumn in a 4–1 win over Neuchâtel Xamax.

Xherdan played for the club for three seasons, having proved himself to be a great striker. The young man scored 18 goals. Fans remembered the performance of the football player in the match against Manchester United in the UEFA Champions League (2011) when he provided two assists and helped the team to defeat the English team. During his career in the FC Basel, Shaqiri and his colleagues won the Swiss Super League three times and the Swiss Cup twice.

In early February 2012, football fans heard the news that Xherdan was traded to the German club Bayern Munich. The transfer fee was € 11.6 million. The Munich club increased the player's salary, and the Albanian received € 2 million a year.

Xherdan put on the Reds number 11 T-shirt and rushed into battle. Shaqiri made his debut in a win against Bavarian neighbors SpVgg Unterhaching, but the Albanian could not score a goal. However, he improved his statistics in the next match against SSV Jahn Regensburg, scoring a goal (the second one in this game) and providing two assists for Mario Mandžukić and Claudio Pizarro. As a result, Bayern won 4–0.

When Xherdan joined the team, the German club added the UEFA Champions League title and the UEFA Super Cup to its achievements.

Three years later, Bayern announced the player's transfer to Italian club Inter Milan. Liverpool also wanted to sign the football player, but their offer was met with a sharp rebuff of the athlete. The English club Stoke City also declared an interest in Xherdan. As for the football player, he liked the English club. Therefore, having played 15 matches and scored one goal for Inter Milan, he moved to the UK with peace of mind.

The transfer turned out to be the most expensive in the history of the FC Stoke City. Xherdan moved to the club for a fee of £12 million. However, the team did not regret it. The Swiss provided an assist in the first match and scored a goal four months after signing the contract. During his career at Stoke City FC, the young man scored 14 goals.

At the age of 16, Xherdan Shaqiri began playing for the Swiss national team at international tournaments. He made his debut in the match against Italy at the 2010 FIFA World Cup. At the next world championship, he pleased fans with a hat-trick in the game against Honduras.

But the most fantastic performance happened at UEFA Euro 2016, where Shaqiri participated in all four matches. The Swiss team reached the playoffs. He scored with a bicycle kick in the game against Poland.

Xherdan has a lot of nicknames, including "the Alpine Messi." Like Lionel, he is considered the leader of the national team, plays a ball no worse than the eminent athlete, skillfully hits with his left foot and easily bypasses opponents. It is noteworthy that the footballers' height and weight are similar. Xherdan is 5.54 ft. (169 cm) tall, weighing 158.73 lbs. (72 kg). However, Shaqiri looks bigger due to muscles.

Xherdan is not against such a nickname, because Messi is his idol. He also idolizes Cristiano Ronaldo. He is sure that the rest of the players can only dream of surpassing these two stars.

There is no information about the athlete's relationship. Apparently, Xherdan is still not married, which can delight his fans. Sometimes, fans go to extremes to be with the handsome athlete. Shaqiri told reporters that one day he had to go on a date with a female fan who threatened to commit suicide if he refused to go. He said,

"I went to her, reassured her, gave a T-shirt, and the meeting ended in peace."

The young man feels an affection towards his family. When he started making money as a professional football player, he immediately bought a new home for his parents. There was no heating system in the old house. Shaqiri considers his brother Erdin to be his best friend, and they always trust each other.

Xherdan communicates on social networks, has Instagram and Twitter pages. He has a passion for watches and quality shoes. He dreams of opening a cafe and wants his business partner to be Leonardo DiCaprio. The fact is that Shaqiri is a fan of the American actor. He especially likes the movie The Wolf of Wall Street and admits that he has watched it a hundred times.

In the 2017-2018 season, Shaqiri scored eight goals and provided seven assists. The contract with Stoke City is valid until 2020. But in the spring, rumors spread in the press that the player was planning to move to Liverpool.

Shaqiri was included in Switzerland's squad for the 2018 FIFA World Cup in Russia, along with his fellow countryman, a Kosovo Albanian, Granit Xhaka. Moreover, Xhaka's participation was under challenge because, at the end of May, he was injured, but in the end, it was not serious. The young athletes were involved in a political scandal.

In the group stage, Switzerland played against Serbia. When Shaqiri and Xhaka scored goals, both players made an eagle gesture, celebrating their goals. The bird is a symbol of ethnic Albanians. Besides, Xherdan wore boots with the flags of Switzerland and Kosovo.

The FIFA Disciplinary Committee conducted an investigation and fined each player 10,000 Swiss francs (a little more than $ 10,000).

In July 2018, it was announced on the Reds' official website that Liverpool signed winger Xherdan Shaqiri after triggering his £13.5 million release clause. 26-year-old Shaqiri concluded a five-year contract.

Xherdan Shaqiri has a net worth of $12 million.