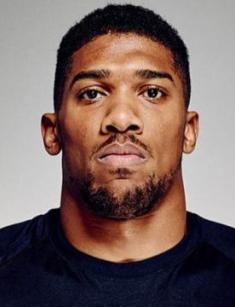 The British boxer is almost invincible. He has participated in more than 50 matches and lost to a few opponents; most of the failures happened long ago, when the man was an amateur. Joshua is also known as the winner of the Olympic gold medal.

The future champion was born into an international family, the Nigerian mother and the Irish father. The boy lived in the mother’s homeland until he became a school student.

Anthony took an interest in sports early. The boy was fond of soccer and showed high results; he could run a hundred meters for eleven seconds thanks to his speed and stamina.

Joshua was cocky, and his hot temper was only increasing, so his cousin took him to a boxing club to channel his energy into something productive. There were no ideas about his future championship: Anthony only put everything he had to training. Little by little, the athlete’s fondness of boxing was growing, and he showed his talent in it. Muhammad Ali and Conor McGregor were Joshua’s icons.

When Anthony graduated from school, he started working at a brick factory in Watford and then moved to the capital at the age of 17.

The athlete tried himself against significant opponents only at 18. Dillian Whyte became his rival; the sportsmen met later as professionals. Although it was the first fight for the kickboxer, he knocked down Anthony who had never been defeated before.

The next year, Joshua gained the Haringey Box Cup and then the ABA Championships. 2011 brought the man the silver medal at the World Amateur Boxing Championships in Azerbaijan; only Magomedrasul Majidov surpassed him. This achievement let Anthony participate in the Olympic Games in London in 2012: the British boxer’s performance was splendid. He got as many points as Roberto Cammarelle and yet took the first place.

In fall 2013, Joshua debuted as a professional boxer; he had to face Emanuele Leo who had had only victorious battles before. The English sportsman knocked out him in the first round. The chain of fights against little-known boxers followed; six of them ended with knockouts. In 2014, Anthony won the highly-awarded athlete, the former British champion Matt Skelton; although Skelton got up after a knockdown, Joshua eventually defeated him.

Further on, Anthony fought against notable rivals. The young man caused some damage to Kevin Johnson in 2015 and took the honorable second place in the WBC rating. The same year, in fall, Joshua faced the Scottish athlete Gary Cornish, never beaten before, and knocked him out.

The rematch between Anthony Joshua and Dillian Whyte was something worth seeing; it almost ended up with a mass brawl, for Joshua was caught up with his attack. The British boxer won in the seventh round and brought Whyte the first loss in his career.

Three months later, in April 2016, Joshua stripped the American Charles Martin of his IBF Champion title; once again, the sportsman brought the first failure to the never-defeated-before opponent. It seemed was like a usual practice for Anthony. In summer 2016, he fought against Dominic Breazeale; two knockdowns were the brilliant show.

The second title defense took place against Éric Molina who had crashed the champion Deontay Wilder. The rivals were feeling each other out for a long time and did not use powerful attacks; however, Molina lost in the third round.

Russian and Ukrainian fans were looking forward to the end of April 2017: the fight against Wladimir Klitschko, who had already lost his champion title, was scheduled. Three titles were at stake: Anthony’s IBF, WBA, and IBO.

The event was bright and impressive; it was called Fight of the Year later. The beginning was relaxed, but aggressive series and knockdowns followed soon. Joshua became the leader and won eventually; Klitschko quit the sport after the battle.

In October 2017, the sportsman met with the Cameroon boxer Carlos Takam; the recording number of tickets was sold. It was the first time Joshua participated in the fight for $20 million. Both athletes were injured: Anthony had severe nose trauma while Carlos got his eyebrow cut and a copious hematoma. The British knocked out Takam and broke Mike Tyson’s record: he had the 20 fight knockout streak while Tyson had 19.

Many women adore the athlete, yet his personal life has not been much happy. Joshua is a single father. He has a son from the dancer and yoga instructor Nicole Osbourne. The relationship was difficult: the couple kept having quarrels and making amends for a long time.

One day, Anthony started taking care of his son on his own and bought the woman an apartment in London. According to the media, Joshua is not dating anyone now.

The man is fond of tennis, chess, and table games; he reads a lot. Fans can learn the latest news about his life on his Instagram page.

Besides, the sportsman has tried himself in business: in 2016, he opened a new fitness center BRX London; he also presented food supplements for athletes later.

At the end of March 2018, Joshua faced the New Zealand boxer Joseph Parker and gained the WBO title.

The recent battle against Andy Ruiz Jr. brought unexpected results for the athlete’s fans: Joshua lost. The rematch is scheduled on December 7, 2019.