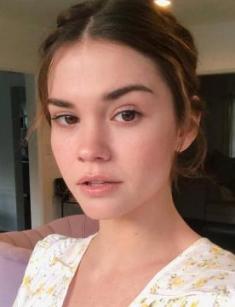 Maia Mitchell is a popular young Australian actress. She is also known as a talented singer. The young woman rose to prominence after the release of the TV series Mortified and The Fosters. The artist has been nominated for the Teen Choice Awards several times. She has an attractive appearance and a good figure. Maia is 5.51 ft. (168 cm) tall, weighs 123.45 lbs. (56 kg), and was born under the Leo zodiac sign.

The actress was born in Lismore, New South Wales. Her parents are not connected with the film industry. Maia’s father, Alex Mitchell, was a taxi driver, mother Jill Mitchell works in the education system. Later, her younger brother Charlie was born in the family.

From an early age, the girl showed excellent acting skills, played in the local theater, as well as in school productions. The actress attended Trinity Catholic College in Lismore. Besides her passion for theater, Maia was also interested in music. She learned to play the guitar quickly and soon began to create the first compositions.

Maia was 12 years old when she got the first role. The girl portrayed Brittany Flune in the Australian teen series Mortified. Her acting was highly praised by critics.

In 2008, the girl moved from Australia to the United States, where she continued to pursue her career in the film industry. Maia was invited to star in the TV series Trapped and K-9. In 2011, Castaway was released, in which the girl played the title character of Natasha Hamilton.

The actress also landed the prominent role in the American TV series Jessie, released on the Disney Channel. She made her feature film debut, playing the role of McKenzie in the musical film Teen Beach Movie, directed by Jeffrey Hornaday. Maia gained wide popularity in 2013 when she began acting in the series The Fosters.

The role of Callie Adams Foster allowed the girl to fulfill her acting potential. The Australian actress brilliantly portrayed a troubled teenager who faced life challenges in a foster family.

Young American actress and singer Cierra Ramirez also appeared in the project. The girls are friends in real life.

The actress’s prominent work was the character of Angela in the comedy-drama Never Goin' Back directed by Augustine Frizzell. Film critics praised her acting again.

At the same time, the Australian artist has also developed a successful music career. Maia recorded soundtracks for the movies and TV shows with her participation. The young woman and Rudy Mancuso have recently released the album Magic. The music video for the title track got more than 11 million views on YouTube.

The celebrity prefers not to tell about her personal life, so there is little information about her love affairs. For a while, Maia had a romantic relationship with colleague Ross Lynch. They co-starred in the TV series Jessie and the film Teen Beach Movie.

The couple’s photos often appeared on the Internet. Since 2015, Maia has been dating musician Rudy Mancuso. On Instagram, the actress regularly posts funny videos with her boyfriend. The young people have a lot in common, and their primary interest is music.

Nowadays, the artist continues to play in films and pursue her music career. Maia’s credentials regularly include new projects.

In 2019, the film The Last Summer was released, in which the actress played a girlfriend of Griffin (New Zealand actor KJ Apa). The movie tells about the last school holidays of the friends who will go to college in autumn.

Maia Mitchell has a net worth of $3 million.