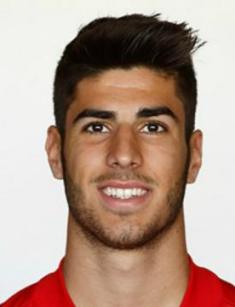 The winger and attacking midfielder in Real Madrid, Marco Asensio is one of the most expensive soccer players today. The former manager of Manchester United, Alex Ferguson, estimated his transfer cost and named a recording sum. The athlete is well worth it. Only one season in Real brought a collection of most significant soccer trophies: La Liga, Supercopa de España, and Champions League. However, despite many beneficial offers, Asensio is going to stay in the Spanish club.

The future soccer star was born on January 21, 1996, in Palma, Majorca, into a soccer family. His father, Gilberto Asensio, grew up in Germany and moved to Spain as a young man; he played in clubs located in the north of the country for a while. Further on, Gilberto and his parents settled in Majorca, and the player got hired in a hotel. This is where he met his would-be wife, a passionate soccer fan Maria Willemsem.

The boy was the second child in the family. As the parents agreed, the father chose the name for the eldest kid, Igor, and the mother named the youngest one Marco. Maria had Dutch roots and named her son after the national soccer star Van Basten.

Asensio took an interest in sports early. Zinedine Zidane was his icon: the beginning athlete not only got posters in his room but also tried to copy his style at practice. At seven, the boy played in a local school, Platges de Calvià, in the suburban area of Palma. The scout Clemente Marín noticed nine-year-old Marco there; he was impressed to see the child outplay 15-year-old opponents easily thanks to legendary Zidane’s techniques.

The parents supported their son in everything. Thanks to his mother, ten-year-old Asensio met the then former president of Real Madrid Florentino Pérez. When the businessman resigned, he often spent time at his yacht near the coast of Majorca. Pérez had had a walk in the city and headed back to the vessel when Maria noticed him and took Marco for a picture with him.

The woman told Florentino her son was going to play for Real one day. Pérez was used to public attention and did not pay much attention to her words. However, Marco debuted in the club a decade later.

The whole family was watching the final match between Spain and the Netherlands at FIFA World Cup 2010. The fathers’ and mothers’ relatives supported different teams, and Marco mentioned in his interview later he would never forget the emotions he witnessed: the Dutch were not moving, as if they were frozen, while the Spanish went crazy.

The next year, when the young man turned 15, Maria died of oncology. It was a severe blow for the family. Gilberto worked in a supermarket and had to go to work by six in the morning; he woke up his sons by phone. Marco was going through the challenging period and threw himself into studies and training.

The junior player debuted in Majorca in 2013, when the club performed in the second division of the championship. 17-year-old Asensio stepped in for another player as a midfielder during the match against Recreativo, Andalusia. Several months later, the team’s coach changed. Lluis Carreras put Marco in the first eleven in nine out of 12 matches. In March, the newbie scored his first goal against Tenerife.

Although the young man did not score more goals in the season 2013/2014, Spanish clubs were impressed. Barcelona was among possible transfer options: the club agreed to pay €4,5 million, and Catalonia-based newspaper Sport reported that managers were looking for an apartment for Asensio. However, the bargain never happened: Majorca wanted the one-time payment while Barcelona insisted on the installment.

The might-have-been transfer frustrated Asensio. The new coach of Majorca, Valeri Karpin, supported his mentee and believed in his talent. Karpin created the friendliest environment for the player and relocated him to the center; as a result, the team’s attacks improved. The chain of losses stopped; Majorca dominated in five matches in a row.

Throughout the season, the player scored six goals and assisted eight times. The successful performance made him more attractive for other clubs, and Asensio’s agent raised the question about Marco’s salary increase; he received € 16 000 at that time. Later, Karpin said in his interview that Marco would gain up to € 400 000. The coach stood against the transfer; he believed that Asensio should focus on developing his skills in Majorca, where he had all the necessary conditions.

Nevertheless, at the end of 2014, the club announced on Twitter that Marco would leave for Real in six months. The transfer cost was €3,9 million. Coincidentally, when Asensio signed a contract with one of the largest soccer clubs in the world, his performance for Majorca worsened. After several defeats, Karpin began to protect him at a press conference and did not welcome other athletes’ playing. The next week, Karpin resigned from the position.

In 2015, fans of Real did not see him in the team: the administration gave him to Espanyol on loan so that the halfback would gain some experience. Thus, Marco debuted in La Liga. Although he scored fewer goals there, the number of his assistances doubled.

Fans and championship organizers liked Asensio; he won La Liga Awards Breakthrough Player. Vicente del Bosque let him play in the friendly game against Bosnia and Herzegovina; the manager of Real Zinedine Zidane expressed his admiration for the player’s achievements.

In the season 2016/2017, Marco’s career was boosting. Zidane decided to let him participate in the most important match: the UEFA Europa League final. Real had to face Sevilla that craved the victory after three previous losses in the final. Asensio scored the first out of three goals that made Real Madrid the winner.

Further on, Sergio Ramos’s team won La Liga and Supercopa de España; the newbie from Majorca contributed to the success a lot. Asensio scored the last goal in the final between Real and Juventus, and the Italians lost with the score 1:4.

The same year, the Spain national youth team became number two at UEFA European Under-21 Championship; Marco scored three goals during the match against Macedonia. In summer 2017, Real finally gained the national Super Cup: the club had failed to win it five times. Soon, L’Equipe presented the top soccer players born after January 1, 1996; Asensio was number one in the rating.

In fall, rumors had it Arsenal was going to buy the winger for €81 million, but the deal was not arranged.

Marco Asensio is not married. In 2016, the young man was dating the model Marina Muntaner, but they broke up eventually. In 2018, there were many speculations about the athlete’s relationship with the reality-show star Sofía Suescun; one could see their pictures together on the woman’s Instagram page.

In fall 2017, Marco had to miss a match in Champions League due to the trauma during depilation. The same year, in November, he had a hip injury and did not appear in the field for a fortnight.

In May 2018, Real Madrid won the Champions League for the second time. Asensio had to watch the game from the bench mostly; Zidane put him in only at the 89th minute. The singer Dua Lipa opened the event; the next day, tabloids were speculating about her hookup with Asensio. However, the woman denied the rumors on her Twitter page.

At the beginning of June, the Spain national team played two friendly matches. The athlete stayed on the bench during the first game at FIFA World Cup 2018.