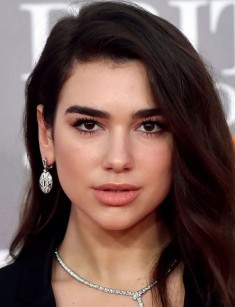 Dua Lipa’s creative biography is impressive. A rising star of British show business, a dark pop singer quickly earned a place in the sun. World radio stations give her songs a warm welcome and some songs peak on the charts.

Almost all singles automatically turn into hit songs as if by magic. The artist has already released an album which sold 1,5 million copies. She has cooperated with famous representatives of the music world.

Dua Lipa was born in 1995 in the capital of England, where her Albanian parents moved from Kosovo a little earlier. They chose the girl's name carefully. Dua is translated as "I love" or "I want." When the future pop star turned 12 years, the family returned to their homeland. Three years later, the girl decided to return to London, where she had great opportunities for creative development. Dua stayed at her friends’ in the city of her childhood.

Lipa grew up in a musical atmosphere. Father Dukagjin Lipa was a rock singer in the past, the daughter adored listening to his songs and also dreamed of a singing career. But teachers did not admit her to the school choir due to the "deep and ugly" voice. She continued to practice signing at home, at the same time the girl went to the theater studio, where she was taught to feel confident on the stage.

At the age of 16, the tall and slender girl (her height was 173 cm and weight 58 kg) with a bright appearance became a model, participated in promotions, filmed in promo-commercials and television commercials.

Dua Lipa persevered in achieving her dream. The teenager began to record covers of popular hits, which she posted on the video hosting Youtube. The girl sang the songs of her favorite Christina Aguilera, Pink, Nelly Furtado.

In 2015, the young singer started recording the first album. The song "Be The One" became the only one whose authorship belongs to another person. It was included in the album because Lipa really liked it.

Representatives of show business were surprised by the rapid climbing of the Albanian girl to the musical Olympus. After the release of "Be The One" every next song of the young singer immediately topped the charts, and the artist was called one of the promising singers. Dua Lipa was immediately nominated for the Sound of ... list. In 2016, she already went on a big tour around Europe, including the cities of Great Britain.

In early 2017, Dua along with a young but already popular DJ from Holland, Martin Garrix, recorded the track “Scared To Be Lonely.” Young musicians raised the subject of being together but feeling lonely in the song.

A little later, they presented a video for this song, where they both played. The music lovers noticed the professionalism of the musicians and the incredible sensuality of the music video. Million YouTube users watch it on the first day.

By the middle of the year, Lipa released her debut album. It seems that she did not think of its title for a long time as the album bears the name of the singer Dua Lipa. At the same time, there was another breakthrough in her career. The song "New Rules" became the super hit and topped the English charts.

Thus, the singer managed to repeat the success of singer Adel, whose song "Hello" in 2015 was the leader on radio stations. They have been the only women who managed to achieve such a great success for two years. In the summer, the music video for "New Rules" was watched by a billion Internet users. The song became popular far beyond the UK, the single peaked at the top on radio stations in a dozen countries around the world.

In general, the year 2017 was very successful for Lipa. She was invited to participate in the main annual music event of England - at the Glastonbury Festival. In December, the singer was named the most streamed woman by Spotify. British music lovers most often listened to her songs.

The young woman’s personal life has been hidden from the public eyes for a long time. Fans gossiped that Harry Styles of One Direction fell in love with Lipa, but the singer did not feel the same way. Fans also thought that their idol had a love affair with Chris Martin, the lead singer of the Coldplay band, who helped her create one of the songs. It was also said that Dua dated Martin Garrix. However, the gossips were not confirmed.

In 2017, Lipa finally told that Paul Klein, a member of Lany band from Los Angeles, was her boyfriend. However, the love affair lasted for several months. Now, it seems that the Albanian beautiful lady is single. The press, as well as her page on the Instagram, don't prove the contrary.

The actress loves tattoos. There were already five tattoos on the girl’s body by the age of 20. She is not going to stop. Dua Lipa has been engaged in charity since the beginning of her career. The singer together with her father organized a fund to help the people of Kosovo.

It became known in spring that Lipa began work on the second studio album. The Nigerian, British singer and composer, Uzo Emenike, known also as MNEK helps her with recording.

The singer has already collaborated with the pop star. They wrote together the song “IDGAF.” Lipa often works with third-party musicians. For example, in April she presented a new single "One Kiss", which was created together with Scottish singer Calvin Harris.

In early June, the English singer pleased Russian fans. Dua Lipa’s concert was held in Moscow for the first time. 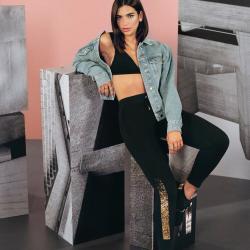