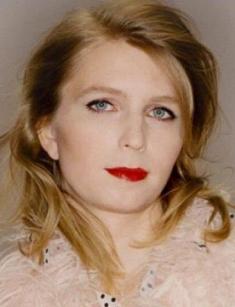 Chelsea Manning, who until 2014 was a male named Bradley, is a citizen of the United States of America, and for now is much more famous than many people involved in the show business. This woman (at that time still a man) was known after she had released a large number of secret military documents.

Bradley Manning's story began in a small town called Crescent, Oklahoma. The boy was born on December 17, 1987. Manning's father, Brian, served in the Navy, was a long time in Wales. That's where the man met Susan Fox. The lovers got married, and in 1976 they had a daughter. The girl was named Casey. Three years later, the family moved to the U.S., Brian's homeland, where a little later Bradley was born.

Bradley's sister remembers that parents often drank without paying attention to their children, and it was Casey who had to take care of her brother. Already in childhood, Manning became interested in computer games, in the fictional universe where it was easy to hide from the indifference of parents. Studying at school was given Bradley easily, especially the boy attracted informatics and science.

A little later, Manning's parents divorced, and Bradley with his mother returned to Wales. In the British school, the teenager also had no problems with academic performance, but classmates often teased Bradley because of overly feminine manners and a clear American accent.

However, Manning never got used to the new country. After graduating from school at the age of 17 he moved to his native States, settling with his father and his new family. He immediately found a job as a programmer but was soon fired.

At the same time, Bradley Manning confessed to his father that he was gay. The young man openly put on makeup and brought guys to the house. This led to frequent conflicts with the stepmother. One day, Bradley threatened the woman with a knife. After that, his father threw the boy out of the house.

Under Manning's father insistence, he joined the army. For the young man, military service was tough. It seemed unbearably hard and physically demanding for Bradley, as well as the constant control of his superiors. Relationships with fellow officers were also poor. With the low height of 5'2'' (157 cm) and low weight of fewer than 120 lbs (53 kg), Manning was often bullied.

Bradley Manning was being sent to Iraq in 2009. Initially, his superiors thought he was unsuitable, but there was a lack of specialists. In Iraq, Manning got a computer, as well as access to secret Pentagon documents. Bradley, like the rest of his fellow programmers, had to work 12 hours a day in stuffy, cramped rooms.

While working, Manning stumbled upon a video recording of the U.S. military shooting civilians from a helicopter. The young man was seized by an awareness of the injustice of what was happening. Bradley posted the video on the Internet and started looking for other evidence of war crimes.

After a while, Bradley went on vacation in the United States. There, the programmer turned to The Washington Post and The New York Times, offering to pass on the obtained information. However, representatives of the media were not interested in Manning's information or maybe probably did not believe the young man. Then he contacted Julian Assange's WikiLeaks, who was famous for publishing classified information in various ways.

As Manning later confessed, talking to WikiLeaks representatives helped to brighten up the hours of hard work and communication with unfriendly colleagues. In April 2010, Bradley returned from his vacation and wrote a report to the command that he felt like a woman.

Manning was sent to an interview with a psychologist, during which the young man lost his temper and hit the doctor in the face. It is worth noting that by this point, many of the documents handed over by Manning to WikiLeaks had already been made public, and the military was looking for a source of information leakage. Three days after the incident, Bradley Manning was detained in his psychologist's office.

The young man was placed in custody. Manning was charged under 22 articles. According to some rumors, the programmer's treatment in prison was at the edge of torture. Bradley was forced to stand or walk for hours, and he was not given bed linen and forced to sleep naked. On August 22, 2013, the court sentenced Manning to 35 years of imprisonment. Bradley himself confessed only in 10 charges, claiming that he only wanted to show people the true face of war.

The day after the verdict, Bradley Manning demanded that the court recognize him as a woman. The doctors examined Bradley and diagnosed the young man with gender dysphoria (inability to accept his sex). Manning then began to insist on appropriate treatment. In 2015, the military command decided to allow such treatment.

As Chelsea Manning later remembered, it was an absolutely wonderful relaxing feeling when his body and his brain finally began to live on the same wave.

It is worth noting that in the classified information disclosure case, many lawyers sided with Chelsea, emphasizing that Manning only wanted to tell the world about human rights violations and crimes committed by the military. Chelsea's lawyer filed a petition for clemency. At the time, U.S. President Barack Obama did not consider it possible to have clemency for Chelsea Manning, but made concessions and reduced his sentence.

In the spring of 2017, Instagram, Twitter, and other social networks rushed the news about the release of Chelsea Manning. The woman's photo appeared on the covers of newspapers and magazines again. Indeed, on May 17, 2017, Manning was released. After her release from custody, Chelsea claimed to be full of optimism and hope for change in her life. This was the first time she had introduced her pictures to the public before and after her sex change. Later, the ex-convict showed the first glamorous images of her wearing a bikini.

At one time, the woman continued to be listed in the military department, but without receiving a salary. Later, Manning took up human rights work. Chelsea organized a world tour in which she lectured. However, not all countries agreed to allow a former U.S. Air Force analyst to enter their territory. In Australia, where 3 Manning performances were planned, they demanded that the woman must be deprived of her right to enter the country.

In early 2018, Manning announced serious political ambitions. She put forward her candidacy from the Maryland Democrats Party for the U.S. Senate elections.

Chelsea (then still Bradley) had doubts about his sexual orientation as a teenager. At first, the teenager was hiding it, and later, back in the U.S., he revealed the situation to his father and acquaintances, starting to date guys. However, none of the relationships have become really serious.

Already in the army, Bradley got acquainted with programmers from Boston, with one of whom he had a romantic relationship. However, they did not become permanent.

Now the personal life of Manning is still closed from the curious eyes. In early 2019, the girl became the character of another issue of the British magazine Dazed. Her photos appeared on the cover of the magazine, which Chelsea announced to fans from the page of her personal account on Instagram.

In early 2019, Chelsea Manning was called to attend a hearing in the WikiLeaks publication case. The ex-soldiers were required to testify before the grand jury, which the girl refused to do. Manning was remanded in custody again for disobedience to the court. Chelsea calmly accepted the sentence.

On April 11, 2019, Scotland Yard detained Julian Assange, the founder of WikiLeaks, in London, after the Ecuadorian government officially denied an Australian political asylum. The reason for the arrest was the violations committed by the journalist when he was released on bail in 2012.

However, it became known that the programmer was arrested on request from the United States. The indictment from the United States Department of Justice, which was issued shortly after Assange's arrest, referred to his espionage and Julian's conspiracy with former U.S. military intelligence analyst Chelsea Manning.

What about Chelsea's net worth, at present there is no exact information about it.