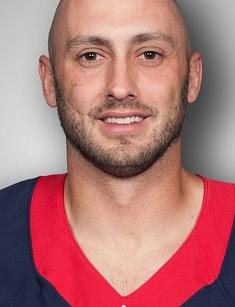 The Ohio native, Brian Hoyer started a football career in NFL in 2009, as a rookie of New England Patriots. He stayed undrafted, however, found a club very soon. Over the years Hoyer has changed eight NFL franchises. Playing at a quarterback position, Brian became the Super Bowl champion in 2018 season. Also, the player is married and has two children. Brian has a net worth of $21 million, including all of his properties and earnings.

The birthplace of Brian was Lakewood. He was born to his parents on October 13, 1985. Brian grew up as a very active boy. He was involved in sport from an early age. Studying at the private Roman Catholic High School, Brian was a member of school’s football and baseball teams and was equally good at both sports. In 2002 he won the baseball tournament with Wildcats. Two years later he participated in the major football game among schoolchildren.

Hoyer decided to spend his college years with the Michigan State Spartans. He entered the MSU in 2004 but didn’t play for team in his first year. In 2005 season he spent five games, completed 15 passes for 167 passing yards and six rushing yards. Next season Hoyer appeared in eight Spartans’ games, scored 82 passes for 863 passing yards and made four touchdowns. Thanks to that, Brian was named to seasons’ best ten players.

In his two final seasons in college, Brian spent 26 games, completed 223 passes in 2007 and 180 in 2008. Made 29 touchdowns in two years, Hoyer had a chance to become the nation's outstanding senior or fourth-year quarterback in college football. However, he lost it to Graham Harrell from Texas Tech. Brian declared for NFL Draft in 2009 and entered it as the ninth-best player on his position.

Hoyer stayed undrafted in 2009, but very soon he signed a three year $1.197 million contract with New England Patriots. He regularly appeared in preseason’s’ games. In March 2009, Hoyer spent his first full game as quarterback. Thanks to his playing, the Patriots made the impressive comeback from 21-0 to 38-27.

After the preseason, Hoyer was the only quarterback, who stayed in Patriots behind Tom Brady. Brian debuted in NFL in October, in a game against Titans. He appeared only in 13 NFL games in 2009-2011 seasons, staying the only Brady’s backup. In three years, Brian showed the stats: completed 27-of-43 passes for 286 yards.

In January 2012, Hoyer had a chance to become a Super Bowl winner; however, the Patriots were defeated by Giants in a final game. In August 2012, the Patriots completed their roster reductions to get to the NFL-mandated 53-man roster limit, releasing Brian Hoyer, key trade bait, and veteran wide receiver Deion Branch.

With nowhere else to go, Hoyer, St. Ignatius’s star, returned to his roots and a quiet high school football field nestled in an urban neighborhood just a mile or two from the Cleveland Browns’ FirstEnergy Stadium. It was September 2012, the start of football season. Hoyer called to his first coach, Chuck Kyle, and asked:

“Coach, do you mind if I come to practice and throw the football around with your players?”

Out of the limelight, out of the N.F.L., Hoyer patiently threw pass after pass to a bunch of eager teenagers and waited for a call inviting him back to the pros.

In November 2012, Hoyer signed a deal with the Steelers, who were looking for a replacement for their injured quarterback. He didn’t take a chance and left the team after 18 days. At the end of December Brian joined Cardinals and did a remarkably competent job starting in Week 17. He signed with Cardinals a one year $2.023 million tender in March 2013.

Spent only two games, he was waived two months later. Hoyer might be a factor in that year's restricted free agents market. The Cardinals shopped Hoyer around to teams, but apparently there were no takers.

On May 16, 2013, Hoyer signed a two year $1.965 million contract with Cleveland. He was a starter in two games in a row, while he appeared only in three games in that season. In October the Browns' worst fears concerning Brian Hoyer's knee injury were realized. Browns' coach Rob Chudzinski announced Hoyer tore his right ACL and would require surgery.

Hoyer missed the rest of the 2013 season. Before the beginning of 2014 season, the Browns’ head coach called Hoyer the potential starting player, and Brian entered it with great hopes although the Browns drafted a prospective player on Brian’s position. As expected, Hoyer began 2014 season as a starting quarterback.

He was the leading player and showed the best game among partners so that Browns reached the best result in their nine starting games since 1994. However, Brian couldn’t show good game for a long time. By December he lost the starting place. In 2014 season he spent 14 games, completed 242-of-438 passes for 3,326 yards and made 12 touchdowns, added 13 interceptions. Those stats were not enough to extend the contract with Cleveland, so he became a free agent.

Before return to Patriots, Hoyer played for Houston Texans in 2015 (11 games), for Chicago Bears in 2016 (six games) and San Francisco 49ers in 2017 (six games). On November 1, 2017, the Lakewood native signed a three year $4.44 million contract with New England and reunited with an old friend, Tom Brady, becoming his backup again.

Despite the fact, that Hoyer appeared only in five games in two seasons for Patriots, he had a lot to do with the Patriots success in Super Bowl LIII. Some could think that Hoyer got paid millions of dollars to hold a clipboard, but that simply wasn’t true. Hoyer has to help prepare the defense for opposing teams as well as fill in for the greatest quarterback of all time. Hoyer had no impact on the game in stats. He didn’t even play a snap, but he made life insanely easy for the Patriots defense.

In May 2019, the Patriots were seen at the Kentucky Derby. Tom Brady jetted off with a crew that included business manager Ben Rawitz, teammate Julian Edelman, and former New England offensive lineman Dan Koppen. When the plane touched down, Brady and Co. were spotted with a few former Patriots — quarterbacks Jacoby Brissett and Brian Hoyer, long snapper Lonie Paxton, and wide receiver Deion Branch — as well as a new face: Cleveland Browns star Baker Mayfield.

Four months later, Hoyer and Brissett were side-by-side in the Indianapolis Colts’ locker room. Despite average career stats, Brian signed a three year $12 million deal with Indianapolis. He accepted the offer and began preparing for the new start of his career.

Brian met his sweetheart, Lauren Scrivens, in high school in Ohio. She studied at the Magnificat High School, a Catholic all-girls school in a Cleveland suburb, while Brian was St. Ignatius’s student, an all-boys Jesuit school. Lauren and Brian were introduced by mutual friends at a school baseball game.

The couple tied the knot in 2010 at The Glidden House in Ohio. Brian and Lauren welcomed two children, a son and a daughter. Hoyer’s wife travels with him to each of the cities that he’s played for. During the offseason, the couple lives in their native Ohio. Brian is very active on Twitter and regularly posts the significant moments of his family life.

In 2015, Lauren helped her husband while his recovery. During that season, the quarterback struggled with multiple concussions. Lauren invited Brian to use acupuncture to overcome his problems. Hoyer tried it along with hyperbaric chambers. Hoyer only started nine games n 2015 but missed two of the final three weeks of the season while undergoing concussion protocol.