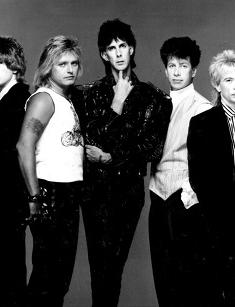 The path to success of the band is a long and stubborn work when musicians gained professional connections and worked on their art. After ten years of performances in local bars, they finally found themselves on the wave. For their long-lasted music career, the musicians experienced rise and fall, took several breaks and made their solo careers, but they got their highest success working together and proved to have the most productive collaboration. Today their songs haven’t lost actuality and stayed a real phenomenon.

The American group appeared in the 70s, the times when music styles had undergone radical changes, connected with the wave of electronic music and extensive usage of the synthesizer. One of the few groups who managed to keep the balance between traditional rock instruments and keyboards became the Cars.

The American rock band was formed in Boston in 1976. Before the creation of the group, its founders worked on other projects and tried to find their unique style and like-minded people.

When Ocasek dropped out of the school, he moved to Cleveland. Here he met Orr, they wrote songs together and led bands in the early 70s. In 1972 they released the first album as a member of the group named Milkwood. This work didn’t bring them any success.

The success came to them after ten years of work; for this time, they gained significant experience and found like-minded musicians. Orr, Ric Ocasek and Elliot Easton formed the other group and achieved local popularity for its concert attraction. After splitting of the band, the trio finally formed the band “The Cars.” The band played in local clubs of Boston, its style was close to Roxy Music and Velvet Underground. They released their first song, and it immediately became hit on the Boston radio. The group signed the contract with a considerable recording company and worked with the legendary producer who worked with Queen, Alice Cooper and many others.

Their debut album appeared in 1978. It helped the band stayed on the charts for two years and a half. The second album appeared in 1979 and brought them more commercial and critical success. Next three years the singers spent working on the new projects and touring across the country. Then the musicians took a short break and devoted time for their solo careers.

In 1980 they released the next album, which proved to be one of the worst projects of the band. The music critics called it boring, monotonous, without life. The critics said that the group didn’t prove hopes. Not to lose its fans the band had to work on their style and tried to sound more commercially in their next album.

After reuniting the band recorded their best album according to critical reviews in 1984. This album became platinum and gifted fans one of the best songs of the group. The band members enjoyed superstardom. In 1987 the band released the most miserable album, as a result, decided to split. Then the band members took off again and in 1988 announced about their breakup.

The group was reunited in 2010, the legendary bandmembers began to record their new album and burn the interest of their fans posting the photos, new songs and music video in social networks. In 2011 they released the last album and began tour across the country and Canada.

After the tour in 2011, the group kept silent for twelve years.

The bassist and lead singer had a cold war for more than twenty years. The leader of the band and the vocalist confessed in one of his interviews that the band members had tensed relationship. There was much jealousy between them because Ric always had more public attention and wrote songs for the band. When Orr offered to record the song on the text which was written by his girlfriend, Ric neglected this proposal, and this fact became one of the reasons for their feud.

The lead singer born in 1949 in Baltimore, in the 70s he started his music career. He removed the letter “T” in his surname due to personal observations. When the band broke up, Orr continued his career playing in various bands. At the age of 53, he died from cancer. Ric also continued his career, but as a solo performer and released seven studio albums. In 2019 the vocalist of the band died at the age of 75.

The other band member Robinson spent all his time working in his own restaurant. Hawkes and Easton gave the band new breath. They formed the original line-up “The New Cars” with the other talented musicians. They performed classic songs of the band and released new tunes.

The musical critics called their style a unique blend of controversial musical genres and waves. Their desperate mix of garage rock, proto-punk and art-rock made something unique that has remained to be attractive for people till nowadays. The band’s songs are various, those who prefer hard rock appreciate their songs like “You’re All I’ve Got Tonight.” Besides they have hits combining power-pop wave and punk minimalism.