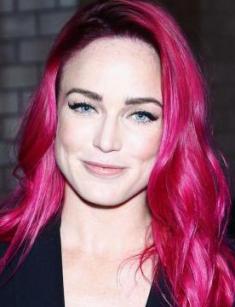 Talented and hard-working, Caity Lotz has always been good at dancing, acting, and singing. The young woman began her career with music videos and switched to big-screen projects several years later; the audience knows her for many popular movies and series.

The would-be actress was born on October 30, 1986, in San Diego, California, and grew up with an elder brother. The girl was active and fearless; she took taekwondo, wushu, Krav Maga, and Muay Thai lessons; parkour and tracking became interesting to Caity later. Besides, she liked to dance, and this hobby predetermined her career choice.

The beginning dancer showed herself from the very start; her bright appearance and perfect for dances height (5.51 feet, or 168 cm.) contributed to the success. Lotz collaborated with Avril Lavigne, Lady Gaga (“Paparazzi”, “Love Game”), Faith Evans (“Mesmerize”), Kasey Brown (“Instigator”), JoJo (“Baby It’s You”), Estelle and David Guetta (“One Love”). Soon, Caity toured with a hip-hop studio Groovaloo and performed a part in the series The Legion of Extraordinary Dancers.

In 2005, Lotz joined the German girl group Soccx and recorded the song “From Dusk till Dawn” the same year. 2007 brought the single “Scream Out Loud” and the debuting album Hold On; the song “Can’t Take My Eyes Off You” followed in 2008.

Caity Lotz debuted as an actress in 2006 and participated in the comedy Bring It On: All or Nothing. In 2010, she received a part of Stephanie Horton in the series Mad Men; Death Valley and The Pact followed in 2011 and 2012 correspondingly.

In 2015, the artist joined the cast of the series Legends of Tomorrow; she personified Sara Lance also known as White Canary. The project also starred the singer and photo model Katie Cassidy and the American actress Katrina Law.

2013 was marked with the new appearances in the movies The Machine, Battle of the Year, and Live at the Foxes Den. Soon, fans could see her in the sequel The Pact 2 and 400 Days. In 2016, the artist had a voice role in the animated comedy series Robot Chicken and worked as a guest star in the series The Flash.

In 2017, Caity was invited to the American detective thriller Small Town Crime by Eshom Nelms and Ian Nelms. The same year, one could see Lotz in an episode of the superhero series Supergirl. In 2018, the short movie Year One with the actress was premiered.

Caity Lotz is an open person and keeps in touch with her fans on social networks; she does not make a secret from her romances as well. The woman used to date the Polish actor Maciej Zakoscielny, but the couple broke up in 2017.

Caity frequently pleases her fans with new pictures on Instagram. On Valentine’s Day 2019, she shared a romantic photo: she was celebrating with a handsome man. It was Dylan Lewis, the music critic, TV journalist, and actor from Australia.

Nowadays, the actress continues to work on the series Legends of Tomorrow. She gives interviews sometimes and ignites people’s interest to the fifth season; its premiere has been scheduled for the beginning of 2020.