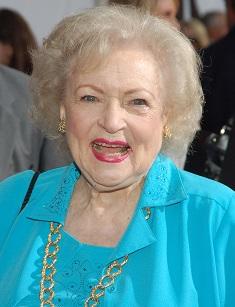 For her long and vivid career, the actress became a real national treasure. During 70 years she has been appearing on the screen and has remained to be a highly demanded artist. She hands the fruits of her long-lasted career. Thus she has gathered a considerable fortune. Furthermore, her long and prolific work brought her true love, loyal friends, and thousands of admirers and fans. Mostly, she is known as a bright artist, but White proved to be much more, thanks to her vivid social position and profitable activity.

As a teenager, she had a significant interest in wildlife. But women didn’t work in such kind of spheres. That’s why, as a young lady, she began pursuing an interest in writing and acting.

When she graduated high school, the actress got first work on Television. She sang songs on and worked as a model. The young artist got her first professional job in Bliss Hayden Little Theatre.

During World War II she postponed her career and became a volunteer. When the war ended, White started looking for work, but studios ignored her because of her “unphotogenic appearance”. That’s why she began working on the radio. At last, in 1949, the comedienne appeared as a co-host on daily life television.

Since the 50s, the situation with work for Betty began to improve. She starred on the television comedy “Life with Elizabeth”, where she played the leading role. This comedy was nationally syndicated about three years; this job made White one of the few influential women on TV. She had a full creative control not only in front of the camera but behind it too. She drew her life experience in the show and told about situations which happened with her. Ironically, but the 29-year-old co-producer of sitcom still lived with her parents.

She continued to support her career by appearing on variety, talk, and game shows. Thus the actress was a frequent guest on a hit show “Password”.

In the 70s, her career took off when she began starring in “The Mary Tyler Moore Show”. Critics and the public highly appreciated her work. White’s character helped Betty to demonstrate both a sweet smile and sharp wit. Then the actress worked on “Betty White Show” with co-hosts John Hillerman and Georgia Engel. She also featured on various sketches, shows, television movies, and miniseries.

But her biggest hit still lied ahead. In 1985 as Rose Nyland in sitcom “The Golden Girls” the actress won the hearts and minds of all people. The sitcom revealed the life of widowed or divorced women in their golden years. The show had an immense success and ran seven years, from 1985 to 1992. This job gave her another Emmy Award; the actress was nominated each year while the show ran.

In the 90s, she took part in a spin-off “The Golden Palace” and was a guest in plenty of television programs. In the 2000s the artist joined a soap opera “The Bold and the Beautiful”. The actress continued to appear on TV shows including “The Oprah Winfrey Show”.

In 2009 she appeared on movie “Proposal” and displayed her comedienne’s talent. The video “Dancing around fire” become the lovey episode of many people.

The actress continued steadily work year after year. In 2010 her career spread like wildfire again. In the 2010s she took part in Snickers commercial campaign which had the slogan “You are not you when you’re hungry”. The actress appeared with Abe Vigoda in the advertisement during the 2010 Super Bowl Cup. This project became very popular.

After this commercial, the campaign under the slogan “Betty White to Host NSL (Please)” began on Facebook. The group consisted of 500, 000 supporters when NBC announced that Betty White would be a host of Saturday Night Live. Thus 88-year-old actress became the oldest host of the show. This appearance brought the actress another Emmy Award.

She appeared on “The Late Late Show” with Craig Ferguson where he announced the beginning of campaign Betty White for president.

That was a joke concerning the vital political issues. In 2011 she also appeared on “Inside the actors studio”.In 2012-2014 she hosted and produced “Betty White’s Off Their Rockers”. In 2018 she surprisingly appeared at Emmys and pronounced an adorable speech. In 2019 she, at 97, voiced the multiplication movie “Toys 4”.

Betty White is known and so much loved for her sparkling sense of humor and vivid sexual comments. She defended the gay community and took part in some ironical scenes on sex theme. The lady in advanced age became a heroine of several memes, “Sliced bread” among them.

Her net worth is $75 million. The actress was married several times. Her first marriage with Dick Barker was short-lived. In 1947 she married a Hollywood agent, but this marriage ended in divorce two years later.

In 1963 she became a wife of Allen Ludden, a popular TV host, and personality. White met him on the show “Password”. When the couple tied the knots, the actress legally changed the name on Betty White Ludden. In 1981 Ludden died, the couple hadn’t children. But Betty was a step-mother of his three kids from the first marriage.

Since the death of her husband, Betty had not remarried. In the interview with Larry King, the journalist asked her whether she was going to remarry. Betty answered, “Once you’ve had the best, who needs the rest?”

Betty has no children. In 2011 she gave an interview and confessed that she has never regretted about this decision: “No, ‘I’ve never regretted it. I’m so compulsive about stuff. I know that if I had ever gotten pregnant, of course, that ‘would’ve been my whole focus. But I ‘didn’t choose to have children because ‘I’m focused on my career and I ‘don’t think as compulsive as I am that I could manage both.”

During her long-lasted career, White found not only true love but also real friends. Today she worked with artists of young generations. These collaborations brought her a good relationship with young stars. Thus, their friendship with Ryan Reynolds is widely known on the Internet. They support each other and crack some jokes. Ryan calls Betty his ex-girlfriend while White appeared on short video supporting Dead Pool.

There also were rumors that the actress has a feud with Doris Roberts, but White dispelled these gossips. Besides, she has old friends from the constellation of former Hollywood stars. The actress and her co-star of the “Golden Girls” Bea Arthur became friends during the filming. They had a long and strained friendship since those times. The death of Arthur turned out to be the big tragedy for White. She met Lucille Ball in the 50s when men dominated the entertainment industry. White and Ball became big friends; they supported each other during all their life. Liberace is the other close friend of Betty. The actress knew about his homosexuality and supported him publicly. In her book “If you ask me” White mentioned her close friend John Steinbeck and his wife.

She is a good friend of Morgan Freeman; the actress surprised him when she danced and sang on the stage while presenting him with the AFI Lifetime Achievement Award, in 2011. The actress moved Morgan to tears. The actress receives a special congrats too. Thus, there was a video where Baraсk Obama wished the actress happy birthday.

The actress is a true animal health advocate and pet enthusiast. She works with several organizations and has volunteered in plenty of zoos. Betty also took part in the various campaign for decades. She put much effort to change the situation with animal rights.

As a result, she sets an example and inspires people to fight for their rights and ideals. She loves animals so much that sometimes even gave up the projects for them. Thus the actress turned down a promising role in the film “As Good As It Gets.” According to the scenario, a little dog was thrown down. Although the film had a happy ending, the actress considered that this story could give people bad ideas about animal treatment. Betty donated tens of thousands of dollars and helped to change the life of people and animals who were in trouble all over the world.

There is an extensive list of White’s awards and achievements. First of all, Betty is a talented actress who was widely recognized. In 1988 she received a star on Hollywood Walk of Fame. White’s star is next to her husband’s star, Allen Ludden. Moreover, the comedian has eight Emmy awards in different categories.

As Betty says, she is happy that half of her life was devoted to her professional career, and the other half was dedicated to the defense of animals. For her active social work, the artist received the National Humanitarian Medal and Legacy Award at the American Humane Association’s Second Annual Hero Dog Awards.

For White’s more than seventy years work, she got the title of Longest TV Career for an Entertainer (Female) and was included in the 2014 edition of Guinness Book of World Records.

In 2015 she received the highest honor in Television - the Lifetime Achievement Award at the 42nd Annual Daytime Emmy Awards by The National Academy of Television Arts and Sciences.