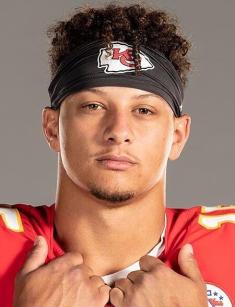 Patrick Lavon Mahomes II is an American football player who is currently playing as a quarterback for Kansas City Chiefs.

Patrick was born on September 17, 1995, in Tyler, Texas. Now, he lives in Kansas City, Missouri. He's of African-American descent.

His parents' names are Randi and Pat. His father Pat Mahomes used to be a Major League Baseball pitcher.

The star has two younger siblings: a brother named Jackson and a sister named Mia. LaTroy Hawkins, a former Major League pitcher, is his godfather.

Patrick is a devout Christian. In middle school, he became a member of a youth group at his church.

In college, Patrick was good not only at football but at basketball and baseball too. He could have become a baseball player. At the beginning of his football career, he replaced an injured quarterback. During his inaugural season, he acted as the backup to Alex Smith.

In college and in the NFL, Mahomes happened to be the only quarterback in history to throw for more than 5,000 yards in a single season. Before him, only two quarterbacks of African-American origin managed to win the Superbowl.

His current trainer is Andy Reid. In 2022, Patrick's salary exceeds $2 million, if calculated together with bonuses. The contract that he signed in 2020 became the second-largest known one in the sporting industry.

The terms of his contract prevent Patrick from playing basketball to avoid injuries. But he enjoys golf and takes part in celebrity tournaments.

The star endorsed such brands as Direct TV, Head & Shoulders, Essentia Water, Hy-Vee, Oakley and State Farm. He released shoes together with Adidas.

Patrick appeared on the Madden NFL cover twice. He and Tom Brady were the first sportsmen who graced this cover more than once. However, Patrick doesn't play this game. He prefers Call of Duty.

He doesn't have too much time for business but he has invested in sports organizations and a fast food franchise.

Patrick supports philanthropy. In 2019, he launched a non-profit organization called the 15 and the Mahomies Foundation. Its primary mission is to enhance the quality of life for kids. This football player supports the BLM movement. He motivated Americans to vote during the 2020 Presidential election.

In 2020, Time magazine featured Mahomes in its list of 100 most influential people.

Patrick began to date his future wife, Brittany Matthews, when both were in high school. He proposed to her in 2020. The next year, their daughter was born. In 2022, the couple tied the knot in Hawaii. Soon, they announced that they were expecting a baby boy.

His better half has a background in sports as well. She used to be a soccer player. Now, she co-owns a professional female soccer team and works as a certified personal trainer.