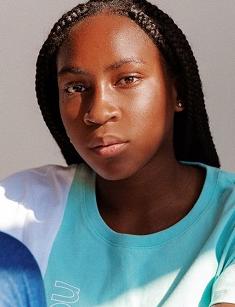 The Atlanta native, Coco Gauff, made a breakthrough in professional tennis in 2019, when she made a victorious debut at the WTA Miami Open. In July 2019 Coco became the youngest ever player, who managed to get the main draw of the Wimbledon Championships. Gauff is the official ambassador of New Balance. Her net worth is roughly estimated at $1 million, including all of her properties and earnings.

The birthplace of Cori was Atlanta. She appeared on March 13, 2004. Cori became the eldest child in a family, as her father, Corey, and mother, Candi, had already welcomed two boys, Cameron and Codey. Cori is of Afro-American ethnicity. Like most of the great tennis players, Gauff was awarded by nature with the unique genes, as her parents also had a big success in sport.

Cori was named after her father, who played basketball for Georgia State Panthers. Coco’s mother was a prospective gymnast in her youth. Candi became a high school champion five times. Also, she was a college track and field star. So, Cori could choose any sport. She tried herself in parents’ activities but focused on tennis.

Cori started interested in tennis when she was only four years old. The little girl was inspired by the amazing game of Serena Williams, which brought her victory in Australia in 2009. Two years later Coco started playing tennis and went to her first camp to the hometown of her mom, Delray Beach, Florida. At the age of seven, her family moved there, as Florida was a more suitable place for developing a career in tennis.

The New Generation Tennis Academy became the first training center of the rising star. Coco’s parents stopped their sports careers and focused on their daughter’s development. Candi took up Cori’s homeschooling. In 2012, Coco met her idol, Serena, for the first time. Then she was eight, she took part in the Little Mo tournament in New York. She tried to get Williams’s autograph on the yellow tennis ball. Gauff became the winner of that tournament.

In 2014 the prospective girl started working with Serena’s coach, Patrick Mouratoglou. The same year she won the USTA Clay Court National 12-under title. She was only ten years, three months old, the youngest champion in history. Gauff has been a forceful presence at the elite junior level ever since.

Coco participated in the premier level for worldwide competition among U-18 junior tennis players, ITF Junior Circuit. In September 2017, Gauff made her Grand Slam debut. She played in girls’ junior category of US Open, where she reached the final. She became the youngest ever player to make that. In June 2018, Gauff won her first Grand Slam title.

She became the winner of the French Open in the girls’ junior category. She was only 14, but reporters and observers already dubbed Coco, the first tennis star of her generation. By the end of the summer, Coco became the top-ranked junior player. In September, she won the US Open alongside in girls’ doubles. Suffered several defeats in autumn, Coco finished that season at the second place of the juniors’ world ranking. In 2018 she moved to women’s tennis.

In May 2018, Gauff won her first professional match. Soon the rising star got the wild card for her most successful tournament, US Open. Coco lost her starting game and didn’t justify the organizers’ trust. Played successfully in several 2019 ITF tournaments, Coco got a wild card to her first WTA tournament, where she made her victorious debut. However, Miami Open ended for Coco just in her second game. Soon she failed to qualify French Open.

The several defeats couldn’t stop the talented teen, and her breakthrough happened in July. Cori was only 15 years, 122 days, when she made the main draw at Wimbledon. She still needed a wild-card spot and to win three qualifying matches in the weeks before Wimbledon just to qualify for the major. And she succeeded in that. Coco entered Wimbledon as the 313th ranked player in the world.

By the will of fate, the 15 years old player met her idol, Venus Williams, in the first round. Her body weight was around 130 pounds. No one expected Coco to beat the former first world’s racket. After stunning Venus in straight sets, Gauff became the youngest player to win a match since 1991. The headline of “15-year-old Cori ‘Coco’ Gauff beats 5-time champ Venus Williams at Wimbledon” became a mass media’s trend on the same day. The match time of Coco’s games was the highest rated on TV.

She reached the fourth round of the tournament before falling to Simona Halep, the eventual champion. The last 15-year-old to qualify for the Wimbledon Championships was Jennifer Capriati, who also reached the fourth round during her Cinderella run in 1991. At the end of July the 15-year-old phenom teamed up with Cincinnati native Caty McNally at the Citi Open in Washington, D.C., and the pair won the doubles titles, capturing their first WTA titles under the combined moniker of "McCoco."

In August, Gauff, ranked No. 139, received a wild-card entry into the US Open’s main draw as USTA officials skirted the WTA’s age-15 eligibility bylaws. It was her third wild card, the maximum limit as stipulated by WTA and USTA rules. She reached the third round both in singles and doubles. She lost individually to Naomi Osaka, and to Ash Barty and Victoria Azarenka in couples.

In 2018 Coco signed a multi-year endorsement contract with a leading sportswear manufacturer, New Balance. In a statement released by the company, Gauff said that she wanted to be a role model to as many young athletes as possible. She continued to watch her role models on TV, and it motivated her to be ready to appear on the biggest stage.

Gauff is one of the few junior players who has her own agent and is represented by Alessandro Barel Di Sant Albano of Team 8, the agency formed by Roger Federer and his long-time agent, Tony Godsick. Her agent confirmed that that became the first endorsement contract Gauff signed. She received several endorsement offers, but her team turned them down to give Coco time to focus on her tennis first.

Cori is fully focused on tennis career. There were no gossips or scandals connected to her love relationship. And it is not a surprise, as she is very young and great popularity, big money, contracts, and admirer would appear in future.