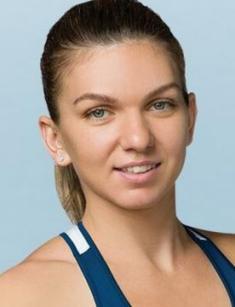 Simona Halep, a tennis player, has long been rid of the title of "forever second." The most terrible question for a girl at press conferences was when she would succeed on the Grand Slam. And when that happened, the athlete felt unconditionally happy. Simona has an estimated net worth of $1 million.

Simona Halep, a Romanian by nationality, was born in the large port city of Constanta in September 1991. Her father ran the dairy plant, and her mother looked after the children, Simona and her older brother Nicolae. He brought his 4-year-old sister to the court because he was a tennis player himself.

The first coach, Ioan Stan, quickly recognized the girl's potential and told her parents about it. They sold the house, took out loans to ensure their daughter's further development. In order not to depend on anyone, they refused the help of a fellow countryman, billionaire and former athlete Ion Țiriac.

The girl herself understood what a burden of responsibility lies on her, so she gave herself 100 percent on the training. The result was noticeable in a short time. According to experts, this ability to catch the ball on the racket is very rare.

Simona made the world's top tennis players nervous, even as a junior. In 2008, Halep went to the Australian Open semi-final, won international championships in Italy and Sweden, as well as youth Roland Garros. Two years later the tennis player got into the adult WTA tournaments held in France, Croatia, Belarus, and her native Romania. The pushy young woman was inferior to the first hundred.

In April 2010, Simona celebrated her first appearance in the single final of the Women's Tennis Association. Besides, she scored points from the Australian Open, Paris, and Biberach. At Roland Garros, Halep met Samantha Stosur, the strongest tennis player of those years.

In 2011, Halep became one of the top 40 tennis players in the world. The sportswoman participated in all major tournaments of the world scale. The performances were not smooth, and victories and defeats followed each other. Simona defeated Svetlana Kuznetsova in Canada and Jelena Janković in Rome but lost to Alberta Brianti in Fez and Lee Na in Wimbledon.

However, Halep's progress in the rating list slowed down in 2012. She made it to the finals of the Brussels premier series and then lost at the start of four tournaments in a row, though she was not playing with the strongest opponents.

Simona finished Season 2013 with the 11th World Racket, setting a personal record of 6 victories. A year later, the Romanian woman confidently entered the top ten of the best tennis players and to this day holds the position. No other female tennis player from the current elite can boast of such stability.

2014 was marked for Halep by the quarterfinals of the Australian Open, the semi-final of the Wimbledon tournament, and the victory in the BRD Bucharest Open. At the US Open, Simona lost only to Serena Williams.

The following year, she won her eighth title at the Shenzhen Open, as well as medals in Dubai and Indian Wells. But Halep lost the championships in Miami, Stuttgart, and Rome. And in Toronto, she took off before the end of the match. At the US Open, Simona was defeated by Flavia Pennetta in a step from the finals. The tennis player couldn't defend the honor of the national team at the Fed Cup. However, 2015 ended on a positive note with the 2nd line of the tournament table.

The upturn began in the summer of 2016. Halep won her next title in Madrid, she went to 1/4 at the US Open and English courts, up to 1/8 at the French courts, and up to the semi-finals at Cincinnati. Simona won in the homeland, at the BRD Bucharest Open, and the tournament in Montreal. In the semi-finals of the Cincinnati Masters, the tennis player lost only to Angelique Kerber, the future world's first racket.

In October 2017, Simona became the first tennis player from Romania to top the WTA rating. On the way to success, Halep competed with Kateřina Siniaková and Naomi Osaka, Coco Vandeweghe and Elise Mertens, and played on the courts of Shenzhen, Doha, and Miami.

In the attacking style, the sportswoman overthrew Garbin Mugurusu's pedestal. And before her three more people were on top during the season. Such a frequent change of leader was last recorded in 2008. At the same time, Halep, like Amélie Mauresmo, Dinara Safina, and Karolína Plíšková, had not won a single victory in the Grand Slam tournaments.

Simona could have been headed the list of the best tennis players before if the woman hadn't lost to Jeļena Ostapenko, Johanna Konta, and Caroline Garcia. Upset Halep then said she probably didn't deserve to be the first racket in the world.

When it comes to the off-court life of the tennis player, the first thing people remember is Simona's breast reduction surgery. The peculiarity of the figure, which in another situation could only be envied, brought a lot of inconvenience to the woman. The press ridiculed that the spectators come to the matches only to look at Simona's figure, not out of sporting interest.

Just after her 18th birthday, Halep sacrificed her bust for sporting achievements. In addition to the increase in results, Simona received a generally beautiful, proportional build. She weighs 134 lbs (60 kg) and is 5'6'' (168 cm) tall, and at such simple parameters, she sends the ball into the air at a speed of 105 mph (170 km/h).

Simona spends her free time watching "unconventional comedies" or movies with her favorite actress Julia Roberts. The woman plans to have a husband and children after the 30th birthday, but in the meantime, rumors of Halep's pregnancy remain rumors.

For the entire sports biography, Halep replenished the bank account with more than $ 21 million in prize money alone. The sportswoman's earnings also include payments under contracts with Adidas, Nike, Mercedes-Benz, and Vodafone Telecommunications Holding.

Season 2017/2018 was almost the best in the career of Simone Halep. The tennis player took the main Roland Garros, a prize of the French Open on her third attempt and became the second Romanian after Virginia Ruzici who won the trophy. By the way, Ruzici is Simona's agent.

According to Daria Kasatkina, this is a natural result of hard work and patience. In an interview with the press office of the Women's Tennis Association, the tennis player said she had fulfilled her dream and was now focused on the Olympics. First of all, Halep thanked the relatives for their support and posted the photo of the happy moment on Instagram.

Despite a disappointing score in the English Open in Wimbledon Simona still kept the first position in the WTA ranking. In the third round of the Major, the Romanian player lost to her Taiwanese competitor Hsieh Su-wei. Specialists predicted a change of leader at the end of the tournament, they could be Sloane Stephens or Caroline Wozniacki, but if the American would win the final, and the Danish woman would not intend to win at all. As you know, luck was on Halep's side.

At present, Simona has a net worth of $145 million.