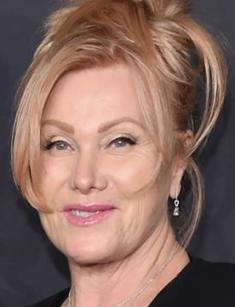 Deborra-Lee Furness is an Australian actress and producer who married Hugh Jackman in 1996. Now the star relationship is more than 20 years old. By Hollywood standards, this is an eternity and an occasion for endless talk and slander. Fortunately, rumors and gossip have no power over the spouses.

Deborra-Lee Furness was born on December 8, 1955, in Sydney, Australia. From the biography of the actress, it is known that her childhood and youth were spent in the city of Melbourne, where she graduated from high school. Few people know, but when Deborra was barely eight years old, the head of the family died in a plane crash, and all the worries about her daughter fell on the shoulders of the mother, who at the time worked as a theater director.

In an interview with the media, Deborra-Lee Furness often said that in her youth, she understood that she could only count on herself. Fortunately, the mother never put pressure on her daughter, giving her the right to choose. The parent always said that the main thing in life was self-realization. There is no need to select a money-related career because, as a result, money won't bring any joy.

The actress made her television debut when she was 20 years old. It was the series Prisoner, immersing viewers in the everyday life of the police. Besides, Deborra-Lee also starred in the Falcon Crest television series, after filming in which the girl went to the other end of the world - New York.

There she enrolled at the American Academy of Theater Arts, from which she graduated in the early 1980s. Immediately after graduation, the charming young lady went on to the theater stage of New York. Then Deborra returned home to pursue a career on television and later became a big-screen actress.

After Deborra was involved in a serious car accident, she was bedridden for nine months. In addition to a broken leg and spinal problems, Deborra also had a broken nose, which she later had to fix with plastic surgery.

This period of illness and recovery was one of the most difficult in the life of the woman, and the roles in the films in which she planned to participate went to other actresses. Her health was failing, and her face was so disfigured that Furness seriously thought her career was at an end.

After the break, it was difficult to find work again. However, the first significant role she was offered after her recovery made her a star in Australia. The 1988 film Shame was about travel lawyer Asta Cadell (Deborra-Lee Furness).

When the young lady's faithful friend, a motorcycle, suddenly breaks, she has to stop in a small town in the Australian outback. The broken "iron horse" forces the woman to ask for help in a nearby house.

Shortly before that, the son of famous people in the city raped the daughter of the owner of this house. Asta offers her help and promises to put the raper behind the bar, but the local population doesn't want to mess up the relationship with the people whose names are on everyone's lips.

For her role in this movie, Deborra got a couple of Australian film awards in 1988, including the Australian Film Critic's Award and the SIFF Award.

In 1992, the actress, along with Christian Bale and David Moscow, starred in the retro musical Newsies. The movie is set in 1899 in New York City, and it tells the story of a strike by street newspaper sellers.

The main character Jack Kelly lives by selling Newspapers and becomes a professional in this business. The boy dreams of a better life and that one day, having saved enough money, he will run away from home. Having met two brothers, David and Les, whose father became disabled due to an industrial injury, Kelly takes patronage over them, teaching them the intricacies of his craft.

Meanwhile, the owners of the most significant New York publications enter into a corporate conspiracy and increase the wholesale prices of newspapers by one-tenth of a cent. However, for poor newspaper sellers, even such a small difference in their purchase price is a serious problem.

In 1995, the movie Angel Baby came out. Besides Deborra, it starred John Lynch, Daniel Daperis, and Jacqueline McKenzie. In the center of the plot of the movie are Harry and Kate, who met in a psychiatric medical center, in which both underwent treatment.

The young people fall madly in love with each other, and after Harry returns to work, they begin to live together. Kate's pregnancy causes alarm to doctors and relatives because, in order for the baby to be born healthy, Harry and Kate refuse medication.

In the period from 2005 to 2010, the filmography of the actress was replenished with the pictures Jindabyne, Sleepwalking, Beautiful, Blessed, and Legend of the Guardians: The Owls of Ga'Hoole.

Beautiful Australian actress with excellent prospects for the future met aspiring actor Hugh Jackman during the filming of psychological drama Correlli. This fateful meeting took place back in 1995, and a year later, the lovers were married.

Wanting to devote herself to her family and husband, Deborra gave up acting. The couple dreamed of a large and friendly family, but repeated attempts to conceive and give birth to a child failed.

Deborra had miscarriages all the time, and it certainly upset the lovers. Then they decided that nothing could prevent them from becoming loving parents, and the couple adopted two children.

Their first child was a boy Oscar Maximillian born in 2000, and five years later, the star couple adopted baby Ava Eliot. The adopted children of Jackman and Furness became the subject of gossip. Fans wondered how such a prominent man refused the opportunity to have a natural heir.

Because of this, there were even rumors in the press that Jackman was gay, and his family was a fiction. To this, Hugh replied that he sincerely loved his wife and children, had nothing against the LGBT community, but was not gay himself.

Deborra made no secret of the fact that she did not like such rumors. After all, in addition to talks about the sexual preferences of her husband, the woman had repeatedly heard not flattering comments about her appearance and extraordinary luck.

It is known that Deborra-Lee Furness is 13 years older than her famous spouse, and it is natural that age-related changes affected her face and figure. This does not give rest to many fangirls of handsome Hugh, as each sees in herself a"more worthy " candidate for her idol.

Deborra-Lee Furness has a net worth of $10 million. For the last time, Deborra appeared on the screen in 2010. After that, Deborra-Lee Furness put her acting career on pause, dedicating her life to raising children and her husband, who often posts photos with his wife and kids on Instagram.

After seeing Deborra-Lee Furness in bikini on the beach, many people suspect that she has undergone plastic surgery, and some say that she has had botox injections. The actress doesn’t comment on such rumors. In 2019, Deborra is trying to help others engaging in numerous charity projects.