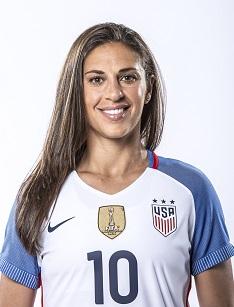 Carli Anne Hollins is an American soccer player. Now, she plays for Sky Blue FC in the National Women's Soccer League. Since 2018, she has been a co-captain of the national team together with Megan Rapinoe and Alex Morgan. Carli has her own merch; her apparel can be found online.

Carli Hollins (née Lloyd) was born in New Jersey in 1982. Her parents are Stephen and Pamela Lloyd, and she also has siblings: sister Ashley and brother Stephen. When Carli was five, she started playing soccer. In 1999, Lloyd was at the opening U.S. match of the FIFA Women's World Cup, and it was an inspiring moment for her.

While attending Delran High School, Lloyd played soccer, and during her senior year, she had 26 goals. In 1999 and 2000, the newspaper The Philadelphia Inquirer named Carli the Girls' High School Player of the Year. In 2001–2004, Lloyd studied at Rutgers University and was a part of the women’s team Scarlet Knights, where her head coach was Glenn Crooks. In 2013, Carli was included in the Rutgers Hall of Distinguished Alumni.

When Lloyd studied in school, she played for various W-League teams, including Central Jersey Splash, New Brunswick Power, and South Jersey Banshees. In her last year in college, she played together with her teammates Kelly Smith and Heather O'Reilly for the New Jersey Wildcats.

In 2008, Carli joined another soccer club, Chicago Red Stars. During the inaugural season, she scored two goals: in April, when her team won over the Boston Breakers and in August during the lesion of the Los Angeles Sol. Chicago Red Stars got the sixth position at the end. Eventually, Lloyd turned out to be a free agent and signed a contract with her home club, Sky Blue FC, for the next season. In spring 2010, she played against her previous team, Chicago Red Stars, and injured her ankle. For the most part of the season, Carli was out of the game, but in September, she returned for two games.

At the end of 2010, Lloyd signed a contract with the Atlanta Beat team for the next year. The head coach, James Galanis, had a really positive review of her professionalism because they had known each other for years. Eventually, the Atlanta Beat got the last place.

In 2013, Lloyd signed with the Western New York Flash. She recovered from a shoulder injury that she got earlier that year, and had her first game for the Flash in May 2013, where her team was overcome by the FC Kansas City. Carli had her primary goal during the match against Sky Blue FC, and that helped the Flash win with a 3-0 record. In June, the Flash won again. Lloyd was named NWSL Player of the Week for her performances. Eventually, the team was advanced to the championship final against the Portland Thorns FC, who defeated the Flash at the end.

In 2017, Carli joined the Manchester City club, and they won the 2016–2017 FA Women's Cup. Next year, she returned to the Sky Blue FC, and during that year, she scored four goals in 18 appearances.

In 2005, Lloyd had her debut as a part of the U. S. women's national soccer team in the game against Ukraine. On October 1, 2006, she had her first international goal during the game against Taiwan. Next year, the player scored four goals at the Algarve Cup. Carli turned out to be the tournament's top scorer, and she received the Most Valuable Player tournament honors. During her win against New Zealand, Lloyd logged her first hat-trick for the national team.

Also, in 2007, Carli had her debut in the FIFA Women's World Cup tournament. In the first match, the U. S. had 2-2 with North Korea. Then, the team won 2-0 against Sweden and 1-0 over Nigeria. In the quarterfinal, the U. S. won 3-0 over England. In the semi-final, Carli's team played with Brazil and got defeated by it with a 4-0 record. The U. S. had a final match against Norway that they won 4-1. Eventually, the U. S. received a third place. Lloyd herself also became third on the team.

In the fourth game of the WPS Season in 2010, Lloyd suffered from an injured ankle but anyway played in 15 matches for the U. S. She started all five games in the CONCACAF Women's World Cup Qualifying Tournament and scored two goals. During the tournament, Carli was named the Player of the Match three times. The U. S. got the third position, and the team went to Italy to compete for a place at the FIFA Women's World Cup in 2011. During the series, Lloyd scored three goals, and she received her 100th career cap.

At the Algarve Cup in 2011, Carli had three goals, and the first one was named the best goal for the tournament. The team won the cup. At the FIFA Women's World Cup, she scored the final goal, and the U. S. won over Colombia with a 3-0 record. Eventually, the U. S. team received the silver medal.

In 2015, Lloyd was included in the players’ list for the FIFA Women's World Cup in Canada. She was a captain of the team during four matches and scored six goals during this tournament. The last Carli’s goal in the final against Japan was named as the most remarkable one at the Women's World Cup.

During the 2019 FIFA World Cup, Lloyd scored against in the games Thailand and Chile. She turned out to be the first player who scored in six Women's World Cup games successively. In August, a video, where Carli kicked a huge field goal during the Philadelphia Eagles training, went viral. After that, various NFL teams proposed her to become the first female to play in a National Football League preseason game. Who knows, maybe it’s one of Lloyd’s next career goals now?

In 2016, Lloyd married Brian Hollins, her love since high school, and a golfer in Puerto Morelos, Mexico. Now, Carli and her husband live in New Jersey, and they do not have children yet. The family does some charity; for instance, they have done philanthropic work for a non-profit organization, Habitat for Humanity.

Speaking about Carli's various positions, she is rather open about it on her social pages, for instance, on Instagram. She speaks out about Donald Trump and fights for equal salaries for females and males.

By the way, Carli sometimes can be confused with another Carli Lloyd, who is also a sportswoman, but she plays volleyball.

Speaking about Lloyd’s awards, she has enough for her achievements. She owns two Olympic gold medals received in 2008 and 2012. Carli was FIFA Women's World Cup champion in 2015 and 2019, and FIFA Player of the Year in 2015 and 2016. Lloyd’s third goal at the 2015 FIFA World Cup received a nomination for the Puskás Award, which is a FIFA's annual award for Goal of the Year.