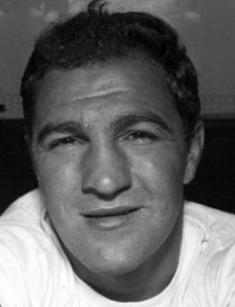 Rocky Marciano is an American boxer, whose name was perpetuated thanks to the Rocky film series, starring Sylvester Stallone. The fighter competed in the heavyweight division. He was the first athlete who did not lose any of his 49 fights. Rocky defended the world heavyweight title 5 times. The boxer became a businessman, having completed his career.

The boxer’s real name is Rocco Francis Marchegiano. He adopted the name “Rocky Marciano” because it was more typical in the USA. The boy was born in Massachusetts, in the town of Brockton on September 1, 1923. The large family was not wealthy. His father, an Italian immigrant and a disabled person, could not provide for the family, so they did not live, but survive each day.

The boy matured ahead of his peers, and there were reasons for that. Rocky tried to help the family, working hard. The young man worked as a snow cleaner, dishwasher, gas pipe layer, and even digger.

His power helped him to stand out among his peers when many children became interested in baseball. Rocky showed good results, playing pitcher. People predicted him the career of a professional athlete, but a broken arm made him forget about the prospects. Marciano could no longer throw a perfect pass, and he had to quit playing baseball.

During this period, the talented young man was noticed by boxing trainer Gene Caggiano. He invited Rocky to attend training at his club, saying that the body measurements of the future athlete would be useful for boxing.

In 1943, Marciano joined the army. He was sent to serve in the Navy in the UK. Once, the young man went to the pub, where he easily fought with the local badass. The pub owner appreciated his skills and offered to participate in battles and earn money. So, Rocky began to develop his fighting skills, mastering the techniques that he later used in the ring. At that time, he learned to fight in a lower position, which is not typical of classic boxing.

The athlete was 5.9 ft. (180 cm) tall and weighed 189.59 lbs. (86 kg), so it was not easy for him to confront tall opponents. Therefore, Marciano thought out the tricks, dives, and drops away that made him brisk and unstoppable. Rocky's punches were heavy. He carefully analyzed the shortcomings of his fighting style and improved chops needed in close distance fight. The stubborn athlete perfected his skills with the help of regular training and was purposeful and persistent during a match.

The professional career of the boxer was not long. Marciano participated in 49 fights, winning 43 battles via a knockout, which proved an obvious victory of the fighter. Throughout his career, Rocky was undefeated. Having grown up in harsh conditions, he was not picky but reserved. The man did not drink or smoke; he was not demanding in everyday life and placed a premium on sport and improvement.

Experts highly appreciated Marciano's technical skills and short punching strategy. He threw hooks and uppercuts into the water, which became an excellent training for the fighter, and modern boxers use this technique during training sessions. Rocky could do it for two hours. Crazy working ability and striving for the best result led to enchanting success. Throughout his career, Marciano won 83% of fights via knockouts.

Rocky's first significant match took place in 1951. Marciano's rival was Joe Louis, who at that moment was not in the best condition, but he decided to enter the ring. Louis often defeated young opponents, so Rocky risked being defeated. During the first rounds, the audience thought that the boxer would give up, but Marciano composed himself and pulled out a victory, having swung with his left hand. It became clear that people will hear the name of Rocky Marciano more than once. Subsequently, the fighter’s rivals often included eminent athletes.

In 1952, he fought with Jersey Joe Walcott. The chances of victory were not high since Rocky was dropped, and he saw poorly during the bout. But Marciano managed to pull himself together, quickly recover, and end the match in a triumph. After the fight, the boxer's face was mutilated. It took him several weeks to rest and rehabilitate. In 1952, Rocky also became the World Heavyweight Champion.

The fight with Ezzard Charles caused a stir among the audience and fans. During this battle, Rocky damaged his nostrils but did not yield to the enemy and knocked him down, proving that he was invincible in the ring. The blows of the fighter were as strong as his human feelings. Having knocked out Carmine Vingo, Rocky went to the hospital where his opponent was taken, waited until the latter regained consciousness, and gave him all earned money.

In 1955, the boxer worthily won the fight with Archie Moore, which was attended by 61 thousand spectators. Marciano did not use doping, did not get involved in crime, and led a dignified life, setting an example for fans. A simple Italian guy gained worldwide fame, and the inhabitants of Italian regions in the USA looked up to him.

He respected his rivals, tried to keep fit, and perceived boxing as an art. His injuries were the result of the athlete’s defense mistakes. The purposeful fighter trained tirelessly and won the bouts over and over again.

Rocky was called Undefeated because, during his career, the athlete did not face an opponent who could defeat him by a wide margin. Fans often debated who would win had Muhammad Ali and met Rocky Marciano in their primes. It is impossible to find out, because when Muhammad first entered the ring, Rocky had already completed his professional career.

Rocky Marciano quitted the career in sports at the request of his family and friends and began to run business. His net worth was $4 million at the end of his professional career. The origin of Marciano did not allow him to forget about the connection with the mafia. Rocky behaved nobly, collaborating with partners, and tried to avoid problems and the involvement in dishonest dealings.

The fighter did not participate in the criminal showdown but made advances when people came to him. Marciano managed to establish business cooperation with the mobsters and invested money in a usurious business. Members of the Mafia, who had networks of offices, provided predatory lending, and the athlete was aware of the way his money was used.

In 1968, Rocky tried to work with racketeer Pierino Di Gravio, but they did not do a single deal since the partner was killed. However, the athlete faced tax problems related to the invested money.

In 1947, Rocky Marciano met Barbara Cousins, the daughter of a retired policeman. In 1950, the lovers’ wedding took place. Two children, daughter Mary Anne and son Rocco, were born in the family.

The wife and mother influenced Rocky's decision to leave the sport. They worried that children could be left without a father, since the fights, involving the athlete, were fierce and bloody. There were rumors that the wife threatened to go and take the children if Rocky had not quitted his career, and he had to make a concession. The athlete preferred personal life to sports.

On April 27, 1956, he officially announced that he no longer intended to enter the ring. The fighter retired undefeated. Having become a businessman, Rocky did not change his habits. He was still unpretentious. The man used to think only about sports, and Marciano sacrificed everything for it. Perhaps it caused rumors that the boxer had other reasons to quit the sport. They said that he got a severe back injury and decided to stop.

On August 31, 1969, the boxer died. The cause of death was a plane crash. Marciano's private jet returned home to the base. The accident occurred over the state of Iowa, near the city of Newton. The pilot lost control, and the aircraft hit into a tree. The passengers on board did not survive.

Rocky’s memory is alive after his death. The photos and interviews that the boxer gave to journalists have been preserved. Contemporaries and friends told interesting facts about him. The movie Rocky, which title character was Rocky Balboa, has forever retained the image of the invincible and stubborn fighter for his followers.

At the time of his death, Rocky Marciano had a net worth of $1 million.