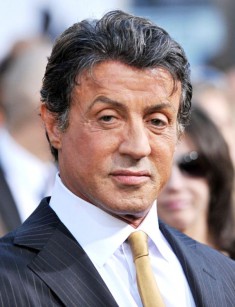 Sylvester Stallone is an American actor, screenwriter, and director. Action movies brought Stallone popularity. The films Rocky and Rambo were the most significant. Nowadays, the director tries to revive the genre, shooting action films such as The Expendables with new special effects and popular action stars.

The future actor was born in New York in the family of an Italian immigrant Frank Stallone, who founded a chain of hairdressing salons and beauty salons in several American cities. His father had an indomitable temper and even some cruelty, which could not but affect his children. Thus, young Sylvester was considered to be a rowdy boy and even attended a specialized school for troubled teens. In addition, Sylvester’s behavior was affected by a birth injury. The boy had damage to nerve endings on the face, that is why he suffered some speech impediment and he probably tried with such behavior to compensate for a physical drawback in the eyes of other children.

Stallone’s parents divorced after 12 years of marriage. Sylvester and his brother Frank stayed with their mother, Jacqueline Stallone, nee Labofish. When the boy left his father, Sylvester discovered the world of sport, trying to train hard in the gym.

When the war began in Vietnam, Stallone moved to Switzerland as a student of the privileged college and at the same time physical education teacher. At that time the future actor first acquainted with the world of theatre. He discovered his talent, probably inherited from his mother, who played in the famous Billy Rose' Diamond Horseshoe Club show in her youth.

After returning from Switzerland, Sylvester Stallone entered the University of Miami in the specialty of dramatic art and decided to devote his life to the stage. He left Alma Mater a few months before graduation and went to New York to conquer the theatres. But it ended in failure. The same situation was with movies. The first role of a young actor was a part of the softcore adult film The Party at Kitty and Studs in 1970.

Directors of real films refused the actor because of his speech problems. Producers and directors started to pay attention to him only after long sessions with a speech therapist. Sylvester moved to Hollywood after playing his first small role in the movie The Lords of Flatbush. In the “country of stars," Stallone tried to achieve success with his own scripts, but it was useless for a long time.

The situation changed when Sylvester suggested a script about a boxing fight to Chartoff-Winkler Productions. The contract was concluded on negligible for Hollywood terms, but the film Rocky with Stallone in the main role brought him millions and, what is more important, popularity. A strong and trained unknown actor of a middle height (177 cm) played the role of a boxing star perfectly.

The success was so significant that the actor and screenwriter were inspired to create several sequels of this film. Three years later Rocky II was released with more sequels in 1982, 1985 and 1990.

Another cult film with Stallone in the main role First blood was released in the wake of the popularity of the strong and purposeful character. Its relevance was highlighted by recently ended Vietnam war. This film also had numerous sequels, which increased Stallone’s popularity. They were shot in 1985, 1988 and 2008.

However, gaining fame after these films, Sylvester put himself in the frame of the actor of one role. All subsequent films such as Nighthawk, Cobra, Staying Alive and others showed to the viewer the one and the same strong man who fights against injustice.

The audience saw Sylvester as a dramatic actor for the first time only after the release of the movie Tango & Cash in 1989, where Stallone demonstrated the other side of a strong man. He appeared in the role of a tough COP, who defeated the lawlessness not only with fists but mostly with intelligence and charm. Another famous hit Cliffhanger supported the image of a dramatic actor. Stallone’s hero is shown as a psychologically devasted man looking for a way out of a difficult situation.

In 1991, Stallone opened a new side of the acting talent. Sylvester played the main role in the comedy Oscar. The film won first place in the American box office, but it did not help the film to pay off. Two years later, the actor again tried himself in a humorous genre. Sylvester played in the science fiction comedy Demolition Man, where he played the usual role of the brutal policeman but with a sense of humor.

In 2006, Stallone forced the audience to look at the usual Rocky from a different angle, he shot the film Rocky Balboa instead of Rocky 6. In the new movie, Rocky has grown old and left boxing, he lives the quiet life of a widower and brings up a son, but the circumstance forces the former boxer to return to the ring.

The sequel Rambo of 2008 has a similar plot. Rambo is a tired war veteran, who reluctantly returns to fighting and transfers knowledge to new generations. The image of a veteran becomes leading in many further actor’s films.

In 2010, Sylvester Stallone shot the action film The Expendables. The movie attracts attention even during the filming with its star cast. Such stars of the action film as Arnold Schwarzenegger, Bruce Willis, Mickey Rourke, Jason Statham, Jet Li and others played in The Expendable. According to critics, the film has revived the genre of action films and returned to the screen the honored actors of this genre. The sequels of The Expendables were released in 2010 and 2014.

In 2013, Stallone starred in a new action movie Escape Plan, where he played a security specialist, who designed a super-prison and he was put in there by the wrong accusation.

In 2015, Sylvester Stallone returns to the franchise about Rocky. The dramatic sports film Creed is both a sequel and spin-off of Rocky, as the film introduces a new hero, a young boxer Creed, and Rocky plays the role of mentor and coach for Creed. The role of Creed was played by Michael B. Jordan.

It is interesting that despite the huge popularity with the audience, Stallone was nominated for the Razzie Award as worst actor and director more than once.

Stallone’s personal life, like most Hollywood stars, is full of scandals, intrigues, and rumors. The actor was married three times. His first marriage with American actress Sasha Czack lasted for 11 years and they had two sons, Sage and Seargeoh. Senior Sage played small parts with his father in some films, and later became a famous actor, but died quite young in 2012 of a heart attack on the eve of his wedding. The youngest son Seargeoh has autism and it is very little known about him. Sasha Czack says that the child’s illness was the reason for the family breakdown.

The second marriage with Danish model and actress Brigitte Nielsen lasted only for a year and a half, and they had no children.

The third marriage is still the most successful. Stallone married American model Jennifer Flavin in 1997, after nine years of dating, and their family still exists today. They have three beautiful daughters Sophia, Sistine, and Scarlet. It is known that the first girl Sophia was born with a severe heart defect, and even the best doctors could not guarantee the success of the operation. Nevertheless, this story ended happily, and the disease has gone away.

It is little known about Stallone’s personal life, except for the famous and even legendary love affairs. Painting is his hobby and Stallone is a pretty good impressionist painter. His paintings are sold very well.

Stallone has an account on Instagram. He posts photos and video of shootings and social events. He has 3,3 million followers.

The premiere of the continuation of the popular comic-blockbuster Guardians of the Galaxy Vol. 2 was on April 10, 2017. The movie was released on May 4. Sylvester Stallone played a secondary role of the former leader of the Ravagers Stakar Ogord.

In November 2017, the premiere of the eighth film of the series about Rocky and the sequel of the sports drama film Creed 2 is planned. In the movie, Stallone will return to the role of boxer Rocky Balboa, and the role of the former boxing star’s successor, as in the first film about Creed, will be performed by Michael B. Jordan. 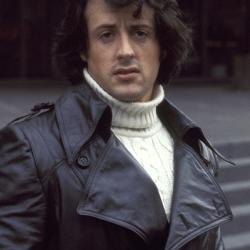