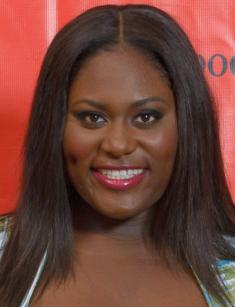 Danielle Brooks is a body-positive actress and singer. She started her career, performing in the church, and moved on to take roles in theater, and then movies and on television. After giving birth to her first baby, she became a part of a clothing line for women.

The actress comes from Augusta, Georgia. She grew up in South Carolina. It is known that her father was a deacon, and her mother is a minister, but there is not much information about her relatives.

Danielle was six years old when she started to perform on the stage. Firstly, with the help of her mother, she took part in church concerts and plays. Later she began acting in theatres and got many praises from her close friends and relatives. Danielle said that she enjoyed playing in church and theatre because she could get a fast reaction from the audience. She participated in numerous youth art programs to become a professional actress.

In 2011, Danielle graduated from the Juilliard School, where she studied drama.

Danielle was very active and tried to participate in every art activity. After she graduated, she was given roles in two theater productions. It was a brilliant start in her career because she demonstrated amazing results in performing.

In 2013, Danielle made her first appearance on TV: she starred in the TV series Orange Is the New Black. In the show about a women's prison, she got a part of Tasha "Taystee" Jefferson. Initially, she was offered to star only in a few episodes of the show, but her performance was fantastic, and she continued starring in the show for the rest of the first season and subsequent seasons.

In the series, Danielle has been working with her best friend Samira Wiley, who played the character Poussey in the show. The two women have known each other since school years.

In September 2013, the actress starred in the HBO series Girls. It was a really important part of her life because she became the first African-American actress to star on the show.

Danielle debuted in 2015. She performed in the musical The Color Purple. The show is based on the 1982 novel of the same name by Alice Walker and its 1985 film adaptation. It follows the journey of Celie, an African-American woman in the American South from the early to mid-20th century. Danielle had the role of Sofia. Her playing was noted by many critics and got many positive reviews.

In June 2019, Danielle got the role of Beatrice in The Public Theater's production of Much Ado About Nothing, which also received positive feedback.

In the summer of 2019, Danielle issued her EP Four. According to her, this album was made with love, and she wanted to remind people about being more grateful in life. It has four original tracks written and performed by Brooks, including the song Blessings feat. Jon Batiste.

Danielle is married, but nobody knows the name of her husband, alhtough she posted one photo depicting them together on her social media. On July 2, 2019, the actress announced about her pregnancy with her first child. She revealed her pregnancy with a photo that she posted on her Instagram with 2,6 million followers, in which she showed off her positive pregnancy test for the camera. On her Twitter account, she also posted a message to her fans saying that she was going to share some exciting news.

Months ahead of her due date, the actress was the guest of honor at a sweet bee-themed baby shower, featuring plenty of yellow décor and the actress showing off her baby bump in a long-sleeved floral gown. Danielle later appeared at the red carpet, on its final season premiere at Lincoln Center’s Alice Tully Hall in New York City, wearing a custom silver sequin tuxedo jacket and gown by Christian Siriano.

She gave birth to a baby girl on November 16, 2019. Danielle has not revealed any details of the baby's biological father.

The actress shared her struggles in finding stylish clothing while she was pregnant. That is why she decided to take part in developing a maternity-clothing capsule collection with clothing line Universal Standard. The team worked on making comfortable clothes designed to be worn before, during and after pregnancy.

The body-positive actress made it clear shortly after her announcement that she hopes to pass on her own values about body and life in general to her daughter. She is happy to become a mother and wants to help other women to enjoy being mothers.

There is a series called Covert Affairs (2010-2015) with the character named Danielle Brooks played by Anne Dudek, but the actress Danielle Brooks has nothing to do with it.

The talented actress has a net worth estimated at $1 million, as of 2019.