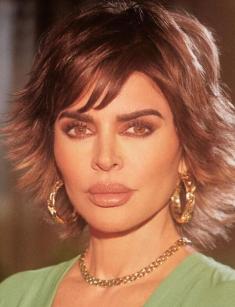 The future celebrity was born on July 11, 1963, in Newport Beach, California. When she was 7 years old, she lost her elder half-sister Laurene and remained the only child in the family. Soon after that, the Rinnas relocated to Oregon.

Lisa hit the screen for the first time at the age of 21, in a music video. She began to appear in daytime TV projects and switched to primetime in a short time. Baywatch and Big Time Rush significantly contributed to her popularity.

She had a role in Chicago (a Broadway musical).

You might have seen Lisa in various TV projects, games and contests for celebrities.

Kris Jenner, Denise Richards, Kyle Richards, Eileen Davidson, Erika Jayne, Brandi Glanville and Andy Cohen are a few examples of prominent personalities whom she knows well or has worked together with.

Lisa has silicone breasts, has enhanced her lips and underwent several other plastic surgeries and procedures. It's not only diet and exercise that help her look gorgeous — and she's not afraid of publicly confessing this fact. Lisa hasn't changed her signature haircut for years.

She began to earn her daily bread as a model in California where she moved after graduation. She acted in commercials and posed for print ads. M&M and Taco Bell are among the largest brands with whom she has ever signed contracts.

Lisa was twice appointed the Playboy cover model. At her debut photoshoot for this magazine, she was pregnant with her first child. The photographer asked her to be as soft and feminine as possible, even though she felt confident and empowered.

Her modeling career inspired Lisa to become a fashion entrepreneur. In 2011, she launched a clothing boutique in California together with her spouse. However, both were too busy to manage it. The next year, they shut down this business. Instead, Lisa released a collaborative outfit collection with Goldsheep.

In 2020, she began to sell cosmetics under her own name. She started with products for lips.

In two years, the star announced her new endeavor on TV: she's planning to make rosé.

In 1997, this lady tied the knot with Harry Hamlin with whom she had co-starred in various projects. Specialists in astrology say a Cancer and a Scorpio are a good match — that's probably why these two are still together! They have two daughters.