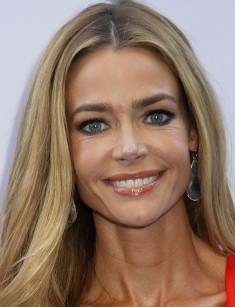 Denise Richards is an American actress and model, Charlie Sheen’s former wife, known for the roles in the films Starship Troopers, Wild Things and the film of the Bond series The World Is Not Enough.

Denise was born on February 17, 1971, in the family of Irv Richards, a Welshman, and Joni, who was of Croatian descent. It happened in the small town of Joliet, Illinois. The girl also had the elder sister, Michelle.

When Denise was 15 years old, the family moved to Oceanside, California. The city is a part of San Diego. The father left his post in a large telephone company and started up his own business. He had a chain of coffee houses and bars on the coast.

Thus, from childhood, the girls had enough money and spent it on their whims. The sisters were very friendly and had common interests. So, Denise and Michelle were carried away by the cinema in search of something new and unknown. Both were crazy about Hollywood movies but did not even think about an acting career.

Denise was a reserved and shy girl in childhood. At school, she was teased about plush lips, and she did not consider herself to be a beautiful lady. Everything changed when the schoolgirl saw the first film with John Travolta. This actor became Denise’s idol, and she decided to change her life, becoming a famous model.

In 1989 Denise Richards graduated from school and went to conquer New York City. She signed a contract with a modeling agency, managed to take part in photo shoots in Tokyo and Paris, as well as in TV commercials for swimming gear and cosmetics.

But the future actress’s body measurements hampered the further career development. She weighs 52 kg and has a beautiful figure, but Denise's height is only 168 centimeters, which is not enough for a model. At the same time, the girl already wanted something more than endless photo shoots and advertising. So, she decided to try her luck in Los Angeles, in the world-famous dream factory.

In Los Angeles, Denise attended acting courses, successfully graduated from them, and without any problems got several bit parts in TV series and television shows. The first full-length film in Richards’s biography was satirical buddy cop comedy film Loaded Weapon 1. In this film, the actress played a small role, but her partners on the set were Emilio Estevez and Samuel L. Jackson.

In 1997 Denise played Jana in the art-house movie Nowhere by director Gregg Araki.

Young Denise’s first significant appearance on the screen was the role in the fantasy film Starship Troopers, directed by Paul Verhoeven and based on the novel by Robert A. Heinlein. The young woman portrayed a spaceship pilot, and the crew had to fight with a giant alien insectoid species.

Denise Richards became famous after shooting in the film. She was offered roles in movies of different genres, and the next project with the participation of the actress was the crime thriller Wild Things in 1998. Richards together with a colleague, Neve Campbell, was nominated for the MTV Movie Award for Best Kiss.

In Wild Things, the girl had to appear in a few rather sex scenes, showing viewers her sexy body. The actress already had such an experience. Denise was completely nude in Sex Crimes, and also in Wild Things. At the premiere, the actress asked her parents to close their eyes not to see sex scenes with their daughter.

In 2004, Denise appeared on the Playboy cover. It happened almost immediately after the birth of a child. The actress looked great in headshots and full-length photos. In 2007, Denise and Pamela Anderson were offered $1 million to pose for the magazine, but it did not happen.

After Wild Things, Richards had many roles. They were successful, bit or simply failures. The latest one is Bond girl Christmas Jones, a nuclear physicist, in the action movie The World Is Not Enough. Fans of the Bond series condemned the girl’s tight shorts and a T-shirt because scientists did not wear such clothes. But Pierce Brosnan who played the role of James Bond seemed to like the beautiful woman.

The next roles in Richards’s filmography were bit parts in the parody Scary Movie 3 and the horror film Valentine. They were followed by a small but exciting part in the romantic comedy film Love Actually (2003), which featured a lot of Hollywood stars, and the title role in the melodrama Good Advice. In the last movie, the actress starred along with her future husband, Charlie Sheen.

In 2002 Denise married Charlie Sheen, having met him on the set. A happy marriage and a beautiful wedding turned into a nightmare. Charlie was the worst husband. He was not only addicted to alcohol and drugs, but also cheated on the beautiful wife, and according to rumors, repeatedly beat her.

In March 2004, the couple had a daughter, Sam, and soon Denise became pregnant with her second daughter. The actress left her husband, filed for divorce and in June 2005 gave birth to the youngest girl, Lola Rose.

In 2006, Denise had a love affair with Richie Sambora, a musician of the band Bon Jovi. He was the husband of her friend Heather Locklear. As a result, the women had a serious conflict, and the rock musician soon broke up with beautiful Denise.

In 2011, Denise Richards adopted a little girl, Eloise Joni. Nowadays she has three daughters, but she is still not married.

Until 2017, the actress almost did not film, paying a lot of attention to daughters and hobbies. New photos with children and pets periodically appear on her Instagram page. It is known that the actress has seriously got carried away with interior design and devotes a lot of free time to this hobby and traveling.

As for Richards’s personal life, the woman officially stated that she had a lesbian affair, but she did not disclose the name of her girlfriend. Denise thinks that her partner is too well known, and she does not want to harm her lover’s career. Richards even wrote about her passion in the autobiography "The Real Girl Next Door."

The actress underwent plastic surgery, as evidenced by the pictures of "before and after" operation. 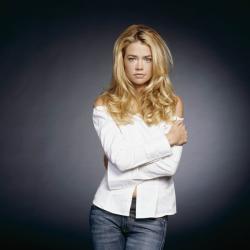