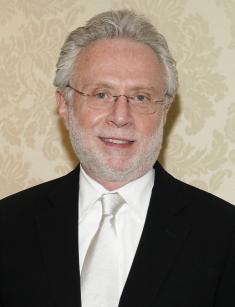 He is a journalist who is considered one of the most popular political reporters. He has been in that career for 45 years and continued working. Wolf gained extensive expertise in the political and military spheres. Blitzer became such a well-known personality that appeared in several mainstream movies playing himself. The people know him as a real institution, and unconsidered source of information.

There is little information about his childhood. Thus, we know nothing about his sibling brother, but in the interview, the reporter mentioned that he has got an elder sister.

It is known, that he was born into a family of Jewish refugees. His parents were from Poland. They survived from the concentration camp. The majority of Wolf's relatives died in that camp, among them his grandparents, two uncles, and two aunts. In 1948 his family immigrated to the USA. A part of his childhood Wolf spent in New York state. He graduated from a college with a degree in History in 1970. In 1972 he received a master's degree in international relations.

Blitzer confessed that he fell in love with journalism after graduation from a college. He thoroughly focused on his job. By his nature he displays interest in policy and history, he told, “I love covering stories that have huge historic impact.”After graduation, the reporter began working In Jerusalem. His talent was spotted by the editor of the local newspaper working for the American media. He began working at that newspaper. He was also a productive columnist and wrote many articles in Hebrew at that time.

His expertise was gradually growing, that made Wolf one of the most significant journalists in Jerusalem working on the American media. In 1985 his diverse reporter's experience allowed him to publish the first book. That writing work revealed details of the reporter's development as well as covered relation between the USA and Israel. In 1986 he was the first journalist who had taken an interview with a spy who was charged spying for Israel. Even though the conversation was controversial, it was a crucial point for the reporter's career. That year he released a book about that trial.

At the beginning of the 90s, he began working as a CNN military affairs reporter. For covering the war in Kuwait, he received an award. In 1992 the journalist started working as a white house correspondent.

By the 2000s, the reporter focused on hosting the TV shows. Thus from 2000-2005, he hosted his show. In 2005 he became a host of two-hours day show "The Situation Room." For the time of existence of the “Situation Room”, the reporter had numerous guests. Thus In 2011, he took an interview with the divorce lawyer Sandy T. Fox, South Carolina governor Nikki Haley and the candidate on presidency Andrew Yang and the senator Angus King.

In January 2020, the reporter worked on the political debate, which was named a combination of “naked political hit with a cynical ploy for ratings. The reporter shared the secret of his long-termed success and professional demand. However, he told his success wasn’t occasional luck. He is old-school journalist who carefully prepares. He said, he didn’t “go with a story unless I have it hard. It’s not good enough to say something based on rumors that were flying around.”

The journalist is a family man. He and his wife live in Bethesda, Maryland. The couple saw their only child in 1981. The spouses named their daughter Ilana.

In 2009 he appeared on the "Celebrity Jeopardy!" but finished round with -$4,600. In the final round, he lost to the comedian Andy Ritcher.

Interestingly, as a well-learned person, the reporter appeared on the number of movies where he played himself. Thus, you can find him in "Skyfall," "House of Cards," "Mission: Impossible: Fallout." In the majority of pictures, he reported on events. Even though the reporter has achieved heights in the profession, Blitzer told that he didn’t feel himself famous. He is working reporter who always focuses on the information. He preferred to be unnoticed and unconsidered. He doesn’t utter his attitude to the presidents. People don’t know whether he is Democrat or Republican. That’s why the media named him “a bearded, bespectacled source of trustworthy news and nothing more.” By the way, his facial hair became iconic. It is his trade mark. He always had a beard.

He actively works as a journalist for 45 years. As Wolf is considered one of the most popular political journalists, the channels highly praised the reporter. He has a good salary, and his net worth of $16 million proves it. The reporter is active on Twitter, where he shared his point of view on political and social news. He keeps healthy life style, stays out from junky food, and exercises.

The reporter received several awards for covering significant social and political issues. He covered the aftermath of hurricanes, wars, terrorist attacks. His contribution to military reporting was highly recognized. He received the Ernie Pyle Journalism Award and Emmy Award.