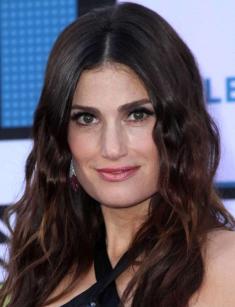 Idina Menzel is a popular musician and actress from the United States and a recurrent winner of prestigious prizes, such as Tony Awards, Broadway.com Audience Awards, Teen Choice Awards, and Billboard Music Award. Menzel gave her voice to one of the central characters in the Frozen franchise, and her song “Let It Go” gained the Oscar in 2014.

The future star was born in a Jewish family on May 30, 1971. Her mother, Helene, worked as a physician, and the father, Stuart, was a salesperson. The parents divorced when the girl turned 15; Idina and her sister Cara stayed with the mother.

Menzel was always an artistic child. To support her family, she began to work at bar mitzvahs and wedding ceremonies as a singer. After graduating from school, the young woman continued her education at Tisch School of the Arts and studied drama.

Originally, Idina’s second name was spelled as “Mentzel”; she changed it for the current version so that it would be more suitable for the USA. The actress’s ancestors used to live in the Soviet Union and migrated to America.

Idina Menzel is a person of many talents: the audience knows her as a movie and theater actress, as well as a remarkable singer.

Menzel’s music career developed not so quickly. She debuted as a vocalist at the Lilith Fair in 1998; the first album Still I Can’t Be Still was released the same year and did not enjoy much popularity. The turning point occurred only in 2004 when the artist presented the second disc Here; she worked on a soundtrack for the series Desperate Housewives the next year.

In 2007, the X-Factor star Rhydian Roberts invited the woman to contribute to his debuting album. However, the real fame came with the third album, I Stand; it gained many places in charts.

Since that time, the celebrity has always been in demand. Although she stopped live performances several times, she always returned and continued to mesmerize fans with her beautiful mezzo-soprano. One could also appreciate Menzel’s singing in Broadway and non-Broadway musicals, such as Nero, If/Then, Rent, and so on.

The actress made her screen debut with minor roles in the romcom Kissing Jessica Stein and the dark comedy Just a Kiss. 2005 brought the first lead role in the movie adaptation of the musical Rent, where Idina personified Maureen Johnson.

In 2010, the actress received a part of Shelby Corcoran in the hit series Glee; she sang “I Dreamed a Dream” and “Poker Face” with Lea Michele there.

2013 became a significant milestone in Menzel’s career: she got a voice role in the animated movie Frozen. The franchise proved to be popular, and several short movies followed; Idina participated in all of them.

The woman married her first husband, the actor Taye Diggs, in 2003; by that moment, their son Walker had already been born. Theater fans loved the couple and considered them perfect, but they split up after more than ten years together. The divorce was amicable, and the ex-spouses agreed to take care of their son.

In 2015, Menzel started seeing the actor Aaron Lohr; they had known each other for a while, since the 2005 movie adaptation Rent. In September 2017, the actress revealed the happy news about her marriage. Although the spouses have no children together, they might decide to have kids soon.

Menzel is a prominent social activist. She is famous for her feminist views and participation in fundraising projects, such as the Ron Clark Academy in 2009. Besides, Idina supports LGBT people’s rights and cooperates with organizations promoting equality.

2019 brought the premiere of the second part of the famous Frozen franchise. Once again, Idina returned to the voice role of Elsa and collaborated with Kristen Bell, who voiced Elsa’s younger sister, Anna. The project was immensely popular and grossed more than 1.1 billion worldwide. The singer recorded the hit “Into the Unknown” with her colleague Aurora for the movie.

The same year, Idina presented her new studio album, Christmas: A Season of Love; the song “At This Table” became a great hit. Fans could see their favorite in the thriller Uncut Gems with Adam Sandler and theater play Skintight. In December, the woman hosted A Home For The Holidays Christmas special.