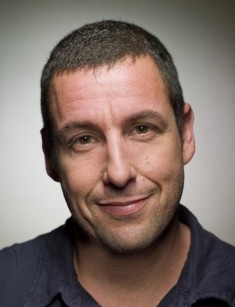 Adam Sandler is one of the most popular America comedians. He has also performed as a scriptwriter, movie producer, and musician.

Adam Richard Sandler was born in Brookyn in September 1966 into the Jewish family: Judy and Stanley Sandlers. The mother worked as a teacher, the father was an electrical engineer.

Since early age, Adam Sandler demonstrated his unusual sense of humor. At first, he made his parents laugh, later amused his classmates in Manchester where his family had moved. Sandler’s jokes were always brilliant acts of improvisation. The boy was joking as naturally as he breathed, but at first, he did not even dream of being a comedian. He would have probably continued to entertain only his nearest and dearest if it were not for his brother – he signed up Adam for the comedian scenes contest. After the performance, it was clear for everybody that they saw a talented comedian.

Adam Sandler developed his talent in the New York university where he regularly gave performances at the club stage for students and teachers. As a student, Adam debuted in the comedy “Going Overboard.” The movie was not successful, but Adam Sandler’s comic career began.

As he finished university in 1991. Adam Sandler started taking part in movies actively. The first two works – “Billy Madison” and “Happy Gilmore” – turned out to be quite popular while the next two comedies – “Lolo” and “The Wedding Singer” were mostly ignored by the audience and critics.

In 1999, the movie “Big Daddy” was released. The movie script was created by Adam Sandler and Tim Herlihy. The movie brought Adam a great international success. Sandler became famous in Russia. Besides, the box office of the movie was excellent – more than $200 million.

Later on, Sandler was engaged in the works where his image was unusual for him – he left the funny side. The melodrama “Punch-Drunk Love” by the director Paul Anderson was warmly welcomed by viewers. After that, Adam Sandler starred in melodramas “Spanglish” and “Reign Over Me.” The latter tells the story about the tragedy on September 11, 2001. The character played by Adam Sandler is the man who has lost his family. 2002 turned out to be even more interesting for Sandler in terms of movies. The comedian came back to humor and starred in two comedies “The Hot Chick” and “Mr. Deeds.”

Next year, the new, unusual Sandler appeared in the movie “Anger Management” with Jack Nicholson. In 2004, Adam starred in the wonderful comedy “50 First Dates” with Drew Barrymore.

The family comedy “Bedtime Stories” became a pleasant surprise for the actor’s fans. In this movie, Adam cooperated with Keri Russell and the English comedian Russell Brand. The actor played a hotel worker who told children bedtime stories that could come true. The movie was created on the Walt Disney company request.

The movie “Funny People” brought Adam Sandler a lot of success. This is a tragicomedy about a popular stand-up comedian who learns about his lethal disease. A year before his death, he hires an assistant to whom he gives all his knowledge. For this role, Sandler rejected the offer to star in Quentin Tarantino’s movie.

In 2010, the movie “Grown Ups” whose scenario had been written by Sandler was released. The actor also played the leading part in this comedy about the classmates, the friends who met after many years after graduation.

One of Sandler’s much-spoken-about movies of this period is the comedy “Just Go With It” in which Adam starred with Jennifer Aniston. The actor played a plastic surgeon, and Jen was his assistant who pretended his wife.

Critics marked the further successful comedies in which Sandler took part: “Jack and Jill” and “That's My Boy.”

In 2012, Adam Sandler joined the team voicing the cartoon “Hotel Transylvania.” The actor gave his voice to Dracula. The animated comedy tells the story of the magic and legendary monsters’ ordinary life. The vampire Dracula runs the hotel Transylvania in which monsters stay to rest and solves problems in interaction with his teenage daughter.

In 2013, Sandler played the main part in the comedy sequel “Grown Ups-2.” The movie was nominated for the anti-award Golden Raspberry 9 times.

In 2014, AdAM Sandler played main characters in three movies only one of which was a comedy. In the family comedy “Blended,” the actor became a single father who accidentally met a divorced mother played by Drew Barrymore. The chain of funny coincidents makes the character know each other and feel affection.

The other two movies were the dramas “The Cobbler” and “Men, Women & Children.”

In 2015, Adam played the main character in the fantastic family comedy “Pixels.” The main movie antagonists are the aliens that use the same strategy as the antiheroes from the 1980s-pixel games to conquer the Earth. The loser-gamers turn out to be the planet’s saviors. The movie received mainly negative reviews.

In the same year, Sandler voiced Dracula in the cartoon sequel “Hotel Transylvania-2.”

In December 2015, the channel Netflix released the comedy mock western “The Ridiculous 6.”

Sandler met his future wife Jackie Titone during the movie “Big Daddy” production. The relationship lasted for 7 years and resulted in the marriage after Jackie concerted into Judaism.

The wedding tool place in 2003 on the seashore. Sandler was wearing the traditional Jewish clothes. It was peculiar that the wedding rings were brought to the couple by Adam’s pet red-tiger bulldog Meatball. Sandler’s best friends who often starred with him were the guests: Rodney Dangerfield, Jennifer Aniston, Rob Schneider, Dustin Hoffman, and Sharon Osbourne.

In the next year, in January, the couple had their first daughter Sadie Madison. In November 2008, the second daughter Sunny Madeline was born.

Adam Sandler is known to love animals. After his bulldog Meatball died, he got a puppy of the same kind and called it Matzoball.

On May 27, 2016, on the channel Netflix, the premiere of the comedy “The Do-Over” in which Sandler plays the main part took place.

In May 2017, on the Cannes festival, the tragical comedy “The Meyerowitz Stories” was presented. The movie tells the story about the family reunion: the members did not communicate with each other for years. Dustin Hoffman took the leading part. Another popular Hollywood comedian Ben Stiller starred in the movie.

Adam Sandler has his own movie studio that he called “Happy Madison Productions.” The comedian worked on 12 movies as a scriptwriter and on 23 movies as a producer. 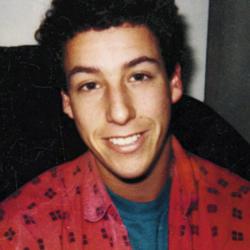