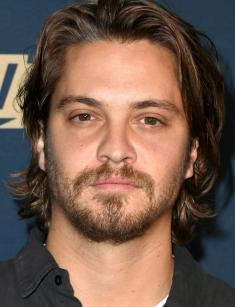 The actor was born and raised in Dayton, Ohio. His parents' names are Angie and Randy. Luke comes from a very religious family, and his father is a pastor. He has three older siblings.

After finishing studying acting in New York, Grimes moved to Los Angeles. Between 2006 and 2008 he appeared in four feature movies. In 2009, Luke debuted on television after he had joined the cast of the ABC family drama Brothers & Sisters.

Grimes’s breakthrough came in 2014, when he appeared as Marc Lee in the war drama American Sniper, directed by the legendary Clint Eastwood and starring Bradley Cooper.

As of 2022, the actor is starring in the hit neo-Western television drama Yellowstone. Brecken Merrill portrays his on-screen son.

Besides being an actor, Luke is also a singer. He is currently working on a country music album and also performed at the Stagecoach music festival in September 2022. In the past, he was in an alternative country band, Mitchells Folly.

Since November 2018, the actor has been married to Bianca Rodrigues, who changed her name to Bianca Grimes after the wedding. The actor's wife is of Portuguese descent and lived in Brazil before immigrating to the US to pursue a career as a model. The couple doesn't have any kids yet.

People often confuse Grimes with actor and model Shiloh Fernandez because of the similarities in their appearances.

In 2014, Grimes made headlines when his "True Blood" co-star accused him of leaving the show after refusing to do a gay scene. Grimes viciously denied the claim and insisted he left to pursue other opportunities.

In October 2022, Luke became the new face of the legendary American brand Stetson which sells boots, hats and apparel.

From 2006 to 2022, Luke Grimes appeared in 24 movies and TV shows. His selected filmography includes: