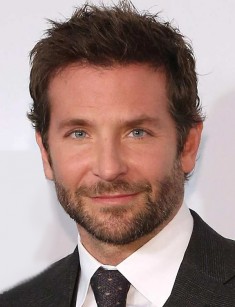 Bradley Cooper is an American actor. At present time Cooper is in his mid-career, time and again he appears in various successful highest grossing projects and he has already been nominated for Academic Awards for four times already.

Bradley Cooper, a son of Gloria and Charles Cooper was born on the 5th of January, 1975 in Philadelphia, Pennsylvania. Bradley’s mother worked for NBC TV company and his father worked as a stockbroker at for the USA investment bank Merrill Lynch. The boy was the youngest child in the family. In childhood Bradley and his elder sister, Holly were brought up according to the religious Catholic beliefs because their parents were congregants of the Catholic church. Except for religious backgrounds’ peculiarities of his parents left its imprint on Bradley: Charles was an Irish immigrant and his mother Gloria was of Italian ancestry.

At the age of 5 years, after the beginning of his diving lessons, the boy was diagnosed with cholesteatoma of the middle ear which could have done harm to the future actor's hearing. However, a prompt intervention of the doctors and series of complex operations which lasted till the guy turned 18, helped him to avoid negative consequences.

Having entered Germantown Academy in Fort Washington Bradley Cooper made friends with Brian Klugman, a future actor, and scriptwriter. Except for studies, during his young years, Cooper had a part-time job at Philadelphia Daily News.

In 1993 he entered the private Villanova University. Here Bradley studied around a year and then transferred to Georgetown University which was situated in Washington.

At university, he joined the rowing team and also took part in the plays of Nomadic Theatre. Bradley studied French language and due to this, he spent six months in France in a small town Aix-en-Provence as an exchange student.

In 1997 Cooper successfully graduated from the university and got a B. A. Degree. After this Bradley went to New York to enter the New School University, where he studied dramatic and acting arts. Alongside with his studies, the guy was working as a doorman at the hotel.

Bradley Cooper began to shoot in movies when he was a student at the university. He played his first role in the episode of a cult series "Sex and the City" in 1999. Then actor presented himself in the science-fiction show "Globe Trekker" as a TV host. Bradley’s appearance and height enabled him to play various roles: from lovers till comedy simpletons.

In 2000 he graduated from the university and got Master's Degree in Visual Arts.

Bradley had his debut on the big screen in the role of Ben in the cult comedy "Wet Hot American Summer" which came on the screen in 2001. For shooting in this comedy Bradley had to miss graduation ceremony at the university.

From 2001 till 2003 Bradley took part in the shootings of the series "Alias" in the role of Will Tippin. Due to this series, the actor became more popular and directors started to invite him to different movies to play short roles. Also, the actor didn't stop shooting in various series: he took part in the crime TV series "Law & Order: Special Victims Unit", dramas "The Street" and "Jack & Bobby", sitcom "Kitchen Confidential".

In 2009 a romantic comedy "He’s Just Not That Into You" came on the screen, in which Cooper appeared with such amazing Hollywood stars as Ben Affleck, Jennifer Aniston, Scarlett Johansson and Drew Barrymore.

The same year the movie "Hangover" featuring Bradley Cooper was shown in the movie theaters of the USA and the whole world. The comedy was met positively by critics and had a gross of 13 times more than the movie budget. It was this movie that brought Bradley long –awaited fame and popularity. Also for this movie Bradley got an award at the annual Hollywood Film Festival.

Despite the huge success of the actor, his next movie "All About Steve" where he played together with the star Sandra Bullock was met by critics with restraint. Actor and his partner on the movie set were nominated for Worst Actor and Actress by the Golden Raspberry Awards and won in these nominations.

In 2010 Cooper showed up in another romantic comedy "St. Valentine’s Day", also featuring other Hollywood stars. No wonder, that this comedy had commercial success.

In 2010 except shooting in the sequel to the comedy "Hangover" - "Hangover Part II" Bradley also played an untypical role in the thriller "Limitless" based on the novel by Alan Glynn.

In 2012 Bradley was nominated for Academic Awards, Golden Globe and BAFTA for his role in the movie "Silver Linings Copybook".

David O. Russell wanted to find special actors so that they could act mad people in a very natural way. He denied a great number of candidate and chose Cooper and Jennifer Lawrence – a star of "The Hunger Games". Director took a risk when he entrusted such difficult roles to the comedy actor and to the "dark horse" whose acting potential was not obvious.

A year later Cooper who was in the crime comedy "American Hustle" at that time was again nominated for the same awards but unfortunately didn’t win any of them. By coincidence and director's tastes, it was Jennifer Lawrence, who also got a role in this movie. Though actors didn't play lovers in this new picture, the press started to talk about a new interesting tandem.

The same year the last part of the trilogy "Hangover Part III" was released and it was crushed by critics and the actor again was nominated for Golden Raspberry.

In 2014 Bradley Cooper was nominated for Best Actor in Leading Role at Academic Awards for his role of Chris Kyle in movie "Sniper". Thus, the actor became the tenth person who was nominated for Academic Awards three years running. Moreover, Cooper debuted in this movie as a producer. The very year actor voiced-over the personage of raccoon Rocket from the movie "The Guardians of the Galaxy", based on the world-famous Marvel comics.

Thar year didn’t pass without a movie with Jennifer Lawrence. Jennifer was invited to take part in the movie "Serena" long before their first collaboration with Cooper. Susanne Bier admitted the candidature of Bradley Cooper, which was proposed by Lawrence and added one more movie to their collection of co-productions.

In 2015 the movie "Joy" was brought to the light, where the character of Lawrence is a mother of many children, who achieves success in business for her invention and the character of Cooper helps her in this.

In 2015-2016 TV season actor took part in shootings of the TV series "Limitless", which continued the plot of the same-name raucous movie.

Actor voiced-over the raccoon Rocket in the second part of "The Guardians of the Galaxy" which was planned to be premiered in 2017.

Also, Cooper plans to begin the shootings in the movie "A Star is Born" – his director's debut. The picture would be a remake of the well-known movie of 1973 and would tell a typical Hollywood story about the young singer, who becomes famous with the help of the musician who was popular in the past. Bradley Cooper would play the leading role himself and he had chosen a singer Lady Gaga as his partner on the movie set. The singer wrote about this on her Twitter.

Bradley Cooper's biography is full of famous women. In the very beginning of his creative career, the actor had a love affair with an actress and dancer Jennifer Esposito. In October lovers announced about their engagement and in December they got married. Though, four years later of their life together Jennifer and Bradley decided to divorce. An actor called irreconcilable differences the official ground for divorce proceedings.

In August 2009 the actor was captured in the company of the actress Renée Zellweger thus confirming the gossips about their love affair. Cooper on his own told that he got acquainted with the actress earlier in 2006 but they began dating each other only after Bradley had officially divorced. Their relationship lasted for two years but in 2011 they separated. Then according to the press actor had brief relations with Olivia Wilde and Jennifer López.

At the premiere of the movie "Words" at the end of 2011, Bradley Cooper appeared in a company of the actress and model Zoe Saldaña. Their relationship lasted until March 2012 and then they took a break. Six months later Bradley and Zoe got back together but in January 2013 the couple broke up again.

Next two years Bradley Cooper was in relations with the British model Suki Waterhouse. For the first time lovers were captured together in Boston in 2013 and nine months later they had their debut as a couple at the premiere of the movie "Sniper".

A Russian super-model Irina Shayk is the last girlfriend of the actor. They are in a relationship for a long time already. Earlier, Irina had relations with the footballer Cristiano Ronaldo. The press paid close attention to a couple of Shayk and Cooper and their personal life was regularly discussed in glossy magazines. A rumor has it, that after two years of relations Cooper and Shayk announced that they had separated because of lack of time for each other. The journalists even had an idea that actor had a love affair with his colleague Jennifer Lawrence.

It was not clear whether Bradley Cooper and Irina Shayk broke up or it was just a publicity stunt but now they are a couple and they have recently delighted their fans with their photo together on Instagram.

In April 2017 the news came to light that Bradley Cooper became a father for the first time in his life – his beloved woman Irina Shayk gave birth to their daughter in one of the best clinics of Los Angeles. It is known, that they gave their daughter a name of Leah de Seine Shayk-Cooper and she was born at the end of March but famous lovers didn't just share their joy with the public.

In 2019 Bradley Cooper was nominated for Best Leading Actor of Academic Awards for his role in the movie A Star Is Born. In this movie he played together Lady Gaga.

During the ceremony of Academy Awards Bradley and Lady Gaga really surprised the public. They approached the stage from their seats without an introduction and began to perform the composition from the movie “Shallow’’.

Unfortunately, the actor didn’t win the awards, but the public was taken away by the amazing performance.

In early June, 2019, it became known that Bradley Cooper and Irina Shayk finally broke up. Rumor has it, that Bradley has a love affair with Lady Gaga, with whom they earlier appeared in the movie The Star Is Born. At present Bradley and Irina discuss the questions of the custody of their daughter. 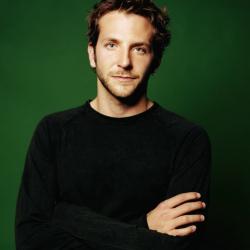