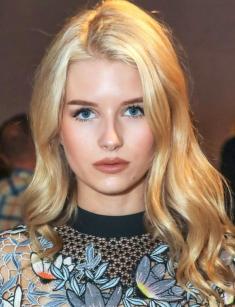 She is a skilled model who works in the USA and Europe. She is well-known not only for her career but also for her family members – her mother and a step-sister are demanded models.

Charlotte had a slightly bohemian childhood. Her career as a model began when she was 16 years old. Today Charlotte is 21 years old. She is an open-hearted and independent young lady who prefers thinking for herself.

Charlotte was born on January 9 in 1998, in London. Her mother is Norwegian. She worked at the Arline, where she met Lottie’s father. A divorced man who was twenty years her and had two children – Kate and Nick.

The model is British. Her ethnicity is white. Lottie has got two siblings. Besides, she has got the half-sister – the well-known model Kate Moss.

As to education, Charlotte studied at the best British school and then university. Besides, she also attended the modeling agency of her half-sister when she was 16.

As a teenager, Lottie was a tomboy. She began smoking and making tattoos.

Her modeling career began in her teen years. Thus she attended the fashion week in 2014 alongside her sister. Soon Charlotte had become a demanded model thanks to her talents and beauty.

Since her early years, her half-sister, a well-established super-model, became an endless source of inspiration for Charlotte. She thanks Kate for the inspiration to pursue the modeling career.

When she was thirteen she participated in a test shoot, she wore a chic red and white striped sweater with a red jacket. Her first campaign was to work with Calvin Klein. A year later, she made her first catwalk at Paris Fashion Week.

It is no big surprise that journalists often compare two sisters – Kate and Lottie. Kate stays enigma who prefers to keep her life secret even when her drug use had been revealed. Lottie is a person from the other generation. She is a talker who shares every minute in her life.

She worked with the most prestigious brands, among them Calvin Klein and Valentino. In 2016 she became the Ambassador of Bulgari’s accessories.

The 20-years-old model isn’t married. It rumored that she is dating Alex Milton. However, this information hadn’t been confirmed. The media reports that her former flame is Sam Prince.

On November 5, the secret flight of the model and Brooklyn Beckham had been revealed. Probably the model will confirm that he is her current boyfriend.

As she is a popular model who works in the USA and Europe, she has opportunities to gather impressive fortune. Her net worth is estimated at $75 million.

Charlotte likes riding. She has a close relationship with her half-sister. It is known that she was a bridesmaid at Kate’s wedding.

The model is a future media personality. Her popularity is steadily growing, not only in the fashion industry. Thanks to her account on Instagram, she attracted broader attention and became an iconic model.

Interestingly, her mother is 57, and now she works as a part-time model.