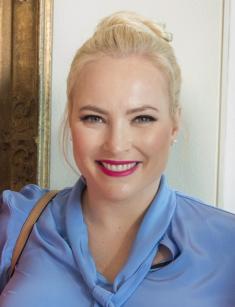 Today she is widely known for her progressive beliefs and powerful statements. Some people call her the rising star of the Republican Party. Meghan proved herself as politically conscious and capable of critical analysis person. That’s why she has got a huge following, especially among people with liberal views. Some people say that she inherited from her father his main good habits, courage, and bright personality. Having a successful career, Meghan seems to have a peaceful and harmonious personal life.

The girl, who was born in the family of the famous political figure, John Mccain, was destined to be a people person. Political seeds were planted for her when she was a baby. Thus 15-days-old Meghan appeared in public when her father took Meghan to polls.

All childhood of the little girl was a politically charged roller coaster ride. There is no wonder why she becomes an outspoken political commentator. In one of her books, Meghan shared her reminiscences on being a child who was grown up in traditional style and freedom. Meghan spent her early ages going hiking, climbing trees, getting dirty. Such kind of childhood had much influence on her lifestyle and inner sense of freedom, which are so typical for a firecracker Meghan.

"I truly believe [...] growing up in the Wild West [gave] me an independent perspective. One of my father's strategists once described me as 'unnaturally fearless for a politician's daughter.”

She is the eldest child in the family; her parents have three more kids. Later she was criticized by the public for her “disapproving image of party girl”. In the interview with Playboy Meghan gave the following explanation: “What am I supposed to do, stay in and read a book? I come from a family of whiskey drinkers. My brothers like to drink and have a good time. It’s America, man. There’s nothing wrong with going out and listening to music and having a little Jack and Coke”.

When her father started the second presidential campaign, 22-years-old Meghan was ready to tackle any challenges to help her father to win. Her main aim was to widen his appeal to the young generation of voters. She tried to reach more digitally-inclined audience thanks to her blog. But people can't understand Meghan's sense of humor and honesty; that's why this idea proved to be futile. During her interview, Meghan said that it was a big surprise for her: "I just thought I was doing a fun thing, and that everyone would want to get in on it." One year later the daughter of the famous politician was banned by the manager of the presidential campaign for being too controversial.

Later she worked much as a political commentator and columnist and did it with professionalism and dedication. She is best known for her contribution to Fox News, and Meghan is also widely known as an author of three books. She combines her revision of political situations in the world with her personal views, which make her columns very vivid and sincere. She interviewed Donald Trump in 2011, and she asked him about his plans to take part in the presidential campaign. Meghan always had a ready tongue that's why she asked Trump directly, "If you run for president, will you hire me for your campaign?" Trump's response was: "I like the idea! I love it!" But he didn't hire her after all.

Meghan featured in Playboy when her father lost in the race for the presidency. She remained clothed. Her interview appeared to be very candid. As senator's daughter said, her father didn't like this fact. "He was not pleased at all," she said. "That's actually one of the few fights we've ever gotten in about things I've done publicly."

She works as a host in daytime talk show with co-host Joy Behar. Meghan's controversial and conservative viewpoints helped her to sound loud and clear.

The popular columnist is a woman with a strong personality, controversial views, and refuses of labels and stereotypes. She shared the view of her father on main political issues and mainly Meghan is Republican too but with her owns beliefs. She isn't afraid to make her ideas widely known with the help of Twitter.

Meghan isn't prone to publish her personal life. Sometimes she posted photos of delicious food which cooked her boyfriend. She loves punk rock, has tattoos, and enjoys wearing black-colored clothes.

Despite all differences, Meghan had a very close relationship with her father. The news of her father's brain cancer shocked her. That time she was engaged with Ben Domenech. He is an American conservative writer, blogger, and television commentator.

Meghan and her fiancé were planning her wedding. She and her future husband planned to elope, but after the tragic diagnosis, they changed their mind and spent the ceremony with the closest family.

She gave a very powerful eulogy when her father died. "I was with my father at his end, as he was with me at my beginning. In the thirty-three years we shared together, he raised me, taught me, corrected me, comforted me, encouraged me, and supported me in all things … All that I am is thanks to him. Now that he is gone, the task of my lifetime is to live up to his example, his expectations, and his love."

It became famous not only for her beautiful and fiery speech but also for rebuking Donald Trump. By the way, the president wasn't invited to funeral service. The McCains preferred to invite vice-president Mike Pence instead of Trump. Meghan McCain rebuked Trump for mocking her father — not least for voting "no" on whether Congress should repeal and replace the Affordable Care Act.

After the death of her father, Meghan had difficulties of recovering, but as she told on Instagram, she had a bright light, her mother, Cindy McCain. "Grateful for your love, strength, never-ending support and always knowing how to perfectly wear black turtle necks and Chanel."

People started to consider whether the famous columnist is pregnant or not after her wedding. But in fact, the couple hasn't children yet. Meghan confessed that feels pressure to have a baby, especially from her mother, but she and her husband aren’t ready yet.

The McCains have considerable wealth, Cindy McCain inherited a great fortune from her father, beer distributor, she is the chair of the inherited firm. Meghan and other kids have a stake in a company. Meghan’s net worth is about $4 million.