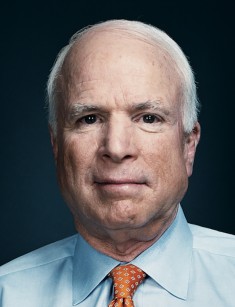 The American politician, the member of Republican Party John McCain (also known as Senator McCain), is a prominent figure on the world political scene. This person is famous for his harsh policy towards Russia, and even he is irreconcilable to abortions and tortures in American prisons.

John McCain's biography is a story of challenges, struggles and improbable strength of spirit. John Sidney McCain (a full name of the politician) was born on the 29th of August, 1936. His father and grandfather were military, both of them became United States Navy admirals. McCain's grandfather took part in combat operations in the Pacific Ocean. John’s father served as a submarine officer.

It's not surprising that the fate of the boy was sealed: John entered United States Navy Academy of the USA in Annapolis. McCain had been studying without particular interest. The future politician was fond of the objects dedicated to literature, history and public administration. In other aspects, John's progress was rather ordinary. Moreover, the young cadet entirely contradicted the will of the administration. Besides, he didn't especially honor internal rules of the academy and repeatedly got reprimanded.

In 1958 McCain graduated from the Navy Academy, having shown nearly the worst result among the students. The future senator continued his studies at flight school. Two years later John became the pilot of the attack plane and stayed at the Navy. He became famous as a reckless pilot. McCain still neglected the rules while flying a plane. Perhaps, this fact became one of the reasons for future challenges which John would face later.

In spring, 1967 McCain was sent to serve to Vietnam. By that time he already had more than 20 combat operations in his asset. On the 26th of October of the same year good his fate had turned on the young pilot: his plane was shot down by Vietnamese military men, and McCain became a prisoner. McCain was injured and then tortured. Trying to achieve the recognition of his guilt, military men beat him. Numerous interrogations and tortures had strongly affected McCain's health. John still has problems with his arms because of the fractures that he had got.

It’s worth to commend the endurance and strength of spirit of the young military. During one of the interrogations John was forced under the tortures to tell the names of his colleagues, but he made a mockery at Vietnamese authorities and listed the surnames of American football players from Green Bay Packers.

In 1968 the Vietnamese authorities became aware of the fact that they had imprisoned the son of the high-ranking military. It was proposed to release John. However, the future senator said that he would accept it only in case of release of other soldiers who had been captivated before him. McCain had spent five and a half years in captivity. McCain released in 1973.

Having returned home and improved after the endures, John began to be interested in the policy. In 1982 McCain represented Arizona on behalf of the Republican Party. Two years later John was re-elected to the Congress. As well as before, McCain was true to himself and wasn't afraid to go against the established rules: the politician sharply criticized the political line of the party and often appeared and was usually right.

Having received 60% of votes from Arizona, John McCain became a senator in 1986. Right up to 2004 he was re-elected on this post every six years. In 2008 the Republican Party proposed McCain as a candidate for the presidency. However, McCain had lost the elections, and Barack Obama became the president of the United States.

There was a scandal connected with this election campaign: in the press there appeared information that John McCain's headquarters had appealed to the representatives of the Russian Federation at the UN to provide material support of McCain's electoral campaign. The Russian party answered it with the following press release:

"We have received the letter from Senator John McCain with a request for a financial contribution to his presidential campaign. In that connection, we would like to admit once more that Russian officials, Permanent Representative of the Russian Federation at the UN and Russian government don't finance political activity in the foreign states".

It became clear that there occurred a mistake in the automatic program which was responsible for mailing. That's why the letter had got to the wrong address, - McCain's representatives commented on the incident.

McCain is quite happy in his own life. The handsome military man who is 170 cm high never lacked female attention. The model Carol Shepp became the first wife of the politician. The couple got married in 1965. In this marriage, they gave birth to their daughter Sidney. Also, McCain adopted two children of Carol from her first marriage.

His family life was perfect; however, when John returned from Vietnam, he decided to file for a divorce. Hard experience had changed McCain's character, and it became difficult for Carol to get along with him. But, John had taken all responsibility for the break-up of their relations and left all property to his ex-wife and their children. Moreover, he paid for the treatment and rehabilitation of Carol who had got a severe car accident several years earlier.

For the second time, McCain got married to Cindy Lou Hensley in 1980. She worked as a teacher. In this marriage, his wife gave birth to two sons of the senator - John and James, and also to a daughter Meghan McCain. McCain's children had followed in the footsteps of their father and had chosen military career. Also in 1991, the spouses took a little orphan from Bangladesh on upbringing.

The girl needed treatment, and a couple of McCain had done everything possible for her health improvement. Two years later John and Cindy adopted the girl and gave her a name of Bridget. John McCain's family becomes bigger and bigger: Senator McCain already has four grandsons. Photos of the happy grandfather often appear in the press.

At present, McCain seems to be a sharp critic of the government of the Russian Federation. He is the author of scathing comments about Russia. Also, he is a furious supporter of European integration of Georgia, Ukraine and other former republics of the USSR. Moreover, the politician doesn't hesitate to criticize actions of Barack Obama and other officials of the USA.

Later, McCain would appear on the screen in the movie about Putin ("An interview with Putin") together with Donald Trump, Angela Merkel, Vladimir Zhirinovsky and other eminent politicians.

In July 2017 there appeared the news about John McCain's disease. The 80-year-old politician was diagnosed with brain tumor. By the words of his representatives, John McCain isn't going to give up and is going to endure this hard challenge. Twitters of McCain's family and friends are full of wishes of health and endurance, and Barack Obama even called McCain "the American hero" in his message. 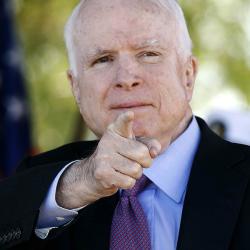