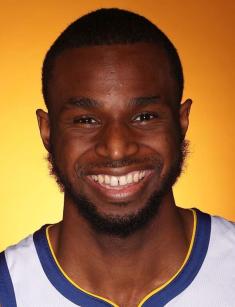 Andrew Wiggins is a Canadian basketball star of Barbudian descent. He's a small forward who plays for the Golden State Warriors of the NFL.

The future celebrity was born on February 23, 1995, in Toronto, Ontario.

His dad's name is Mitchell Wiggins. His mom's name is Marita Payne. Both used to be prominent basketball players. Mitchell was an NBA member. Marita represented Canada at the 1984 Summer Olympics (she relocated to this country from Barbados).

Andrew has two brothers, Nick and Mitchell Jr. Both played basketball in college. Plus, he has three sisters: Stephanie, Angelica and Taya.

Andrew began playing basketball at the age of 9. The next year, he joined an under-10 team in Toronto. He was 5 ft. 7 in tall already. By the time this boy turned 13, he had made his inaugural slam dunk.

The fellow sportsmen he's most frequently compared to are Ben Simmons, Brandon Ingram and Jordan Poole. He regularly receives accolades for his impressive stats.

In 2016, Andrew was appointed the official face of Adidas shoes which were called Crazy Explosive. Due to their high-arching ankle support, these shoes resembled wrestling boots.

He has also endorsed Fitbit and BioSteel.

In the 2014–2015 season, Andrew was named the NBA Rookie of the Year with the Minnesota Timberwolves. In 2017, he signed a contract extension with this team worth $148 million — this made a considerable contribution to his career earnings. The next year, he showcased average points. In 2018, he became inactive because of an injury.

The Golden State Warriors decided to trade Andrew during a difficult period. The team turned out to be the worst performer in the league. Wiggins helped them improve and delivered brilliant results.

In 2022, he debuted in the All Star selection. The same year, the Warriors offered him a $109 million-worth contract for 4 years. He currently stays with this team.

In 2015, Andrew became a member of the national team for the FIBA Americas Championship. It was a qualifying tournament for the Summer Olympics that would take place the next year. Wiggins got the highest score among all the team members. Largely thanks to him, Canada won the bronze medal.

Andrew's girlfriend's name is Mychal Johnson. She's a basketball player too. They have been together since 2013. Some bloggers state that she's his wife — but the couple hasn't officially tied the knot yet. In 2018, they welcomed their first daughter, Amyah. In three years, the second one followed suit, named Alayah Milan.