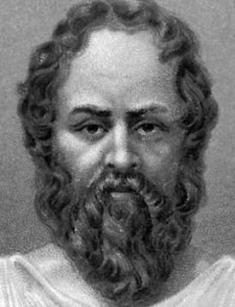 Socrates is one of the greatest ancient philosophers; Plato, Alcibiades, Xenophon, and Euclid were his disciples. Socrates’s teachings marked the beginning of a new stage in the development of the ancient philosophy: a human being and their moral values took the central position rather than nature and the world.

According to various sources, the future philosopher was born in 470-469 BC in Athens, Greece. His father, Sophroniscus, was a sculptor; the mother, Phaenarete, worked as a midwife; the boy also had an elder brother, Patrocles, who inherited the father’s fortune. However, Socrates was not deprivileged.

Only wealthy citizens could pay for a hoplite’s outfit – and the philosopher did when he participated in the war against Sparta. His father’s earnings were pretty good to provide both of his children with what they needed.

The man took part in three military operations; he showed much courage in the field. His bravery was exceptionally bright when he rescued his officer, Alcibiades.

The great thinker was born on 6th Thargelion, which was considered an evil day; it predetermined his faith. According to the Greek law, Socrates became a keeper of the Athenian state and social traditions free of charge. Later, he performed his duties adequately, but with no fanaticism; he paid with his life for his ideas, honesty, and firmness.

Young Socrates used to be a student of Damon, Conon, Zeno, Anaxagoras, and Archelaus; he had an opportunity to communicate with the greatest minds and masters of the epoch. Although Socrates left no book or written evidence of his wisdom, successors’ memories carried through the centuries the information about his life and philosophy. Aristotle was one of them.

The philosopher did not write down his reflections – he preferred an oral form to reach the truth; according to Socrates, written words killed memory and lost their original meanings. The man’s philosophy is based on ethics, good, and virtue, which was knowledge, bravery, and honesty.

Knowledge was, in Socrates’s opinion, the good itself. A person could not do good and be brave or just without understanding the essence of things. Only knowledge gave the chance to be virtuous, for it was conscious.

Plato’s and Zeno’s memories about Socrates’s view of evil contradicted each other. Plato mentioned his teacher’s attitude towards evil was negative, even if it was done to enemies. Zeno’s point was entirely different – evil was necessary during conflicts for protection.

The inconsistency may be explained by the methods used in Socrates’s school. The philosopher fostered dialogues with his pupils and believed the truth was born there. Logically, Socrates the soldier talked to the military leader Zeno about war and gave military-related examples. In comparison, Plato was a peaceful Athenian citizen, and he talked with his teacher about social ethics to close people and fellow countrymen; thus, they discussed whether it was permissible to do evil to them.

The form of dialogues was not the only characteristic of the philosopher’s thinking. It was also notable for the dialectic, colloquial form of truth search, induction (moving from the specific to the general), and maieutics. The matter technique implied elaborative questions with a peculiar subtext; an addressee would get confused and suddenly come to an unexpected conclusion. Socrates was also famous for his by-contradiction questions: an opponent would end up contradicting themselves.

The philosopher did not see himself as an all-knowing teacher. There is a famous quote prescribed to him:

Socrates encouraged his interlocutor to develop new ideas and definitions; he would switch from general subjects to precise terms: courage, love, kindness.

The philosopher lived an ascetical life; people came to him for knowledge and truth. Although the man did not teach oratory skills and other crafts, he instructed everyone how to be kind to their family, relatives, friends, servants, and slaves. Socrates did not take any money from his disciplines. Still, evil tongues associated his name with sophists, who were also fond of discussing ethic norms and spirituality, taking money for their lectures.

The ancient Greek society and Athenian citizens had some ground to be displeased with Socrates’s activities. Parents normally taught their children; there were no schools in that period. However, young people were inspired by the philosopher’s fame and flocked around him; the older generation disliked that; this is where the fatal accusations of the “corrupting the minds of the youth” came from. People believed the great thinker was undermining the very core of their society because young people would stand against their parents and be fond of new sinful teachings, hateful to gods.

Impiety was another significant issue: Socrates was accused of worshipping other gods. He believed that a person must be judged according to their actions, for evil was done out of ignorance. At the same time, there was some place for good in every person’s heart; every soul had a guardian demon (whom we would call a guardian angel today). This creature’s voice sometimes whispered to the man what he should do in a challenging situation.

The demon always helped Socrates, and he did not think it was possible to disobey him. Thus, this demon was interpreted as a new god.

The philosopher’s personal life was not intensive until he turned 37. Peaceful and apolitical, Socrates participated in military operations three times and proved to be a courageous soldier; he saved his student Alcibiades’s life and drove off armed Spartans by his club.

Later, this deed also blew up in Socrates’s face. When Alcibiades grabbed the power in Athens and became a dictator, the Athenians lost their favorite democracy. The man could not walk off politics and social life; he protected those who were arrested unfairly and stood against the dictatorship.

At a senior age, the philosopher married Xanthippe; they had three sons together. Rumors had it the quarreling woman did not appreciate her husband’s great intellect. There would be no wonder: the father of three did not contribute anything to his family or earn money. Socrates himself was satisfied with few things; he lived in the street and wore ragged clothes. People viewed him as a weirdo, just like Aristophanes portrayed him in his comedies.

The Athenians accused Socrates of impiety and corrupting young people. The philosopher rejected a defender and delivered a speech, denying the accusations. There was an alternative way to pay a fine – the democratic law allowed that.

Socrates did not accept his friends’ assistance – they had offered him to escape from his prison or be kidnapped – and preferred to meet with his fate. The man believed that death would find him anywhere, no matter where friends would hide him. As for other options of punishment, the philosopher viewed them as pleading guilty; he could not accept that and chose execution, drinking poison.

We cannot live better than in seeking to become better

Wealth and good birth bring their possessor no dignity.

There is only one good, knowledge, and one evil, ignorance.

Without friendship a communication between people is of no value.

It's better to die bravely than live in shame.