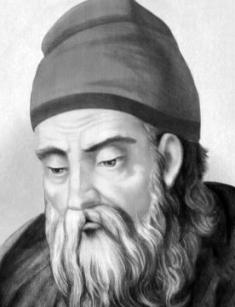 Euclid became the first mathematician of the Alexandrian school and the creator of the eldest mathematical treatise. There is not so much information about his life, in comparison with his body of work; the most famous book, Elements, dealt with solid geometry, planimetrics, and some aspects of the theory of numbers, which served as the fundament for further development of mathematics.

Euclid was born circa 325 BC in Alexandria; some researchers report the future scientist was born in Tyre and lived his life in Damascus. He probably came from a wealthy family, for he attended Plato’s school in Athens – only rich citizens had access to it.

Scientists found out that the author of Elements was younger than Plato’s followers born and active in 427-347 BC; however, he was older than Archimedes, who was born in 287 BC and died in 212. Euclid was acquainted with Plato’s philosophy and agreed with its basic ideas.

The information above has been taken from Proclus’s comments to the first edition of Elements. Besides, Stobaeus and Pappus mentioned the researcher. The former told a story: when a student asked Euclid why science was beneficial, the teacher ordered a slave to give several coins to the inquirer. In his turn, Pappus marked that Euclid could be amicable and soft to any person who could be somehow useful for the development of mathematics.

The surviving information is so scarce and questionable that there is a theory about a group of mathematicians from Alexandria, who took the pseudonym “Euclid”. Sometimes, the Alexandrian researcher is mistaken for the Greek philosopher Euclid of Megara, Socrates’s student, who lived in the fourth century BC. Euclid of Megara was considered to be the creator of Elements in the Middle Ages.

The man spent pretty much time in the Library of Alexandria, founded by Ptolemy I. The ancient scientist was working on the union of arithmetic signs, geometric principles, and the theory of irrational numbers, which would make the geometry. The results were presented in the book Elements, which contributed to the progress of mathematics to a large extent.

The work consists of 15 volumes:

Before Euclid’s Elements, other scientists presented works under the same title and gave the key facts of theoretical arithmetic and geometry: Leon, Hippocrates of Chios, Theudius. All of them fell into disuse after Euclid’s book.

For the next two thousand years, the scientist’s 15 volumes served as the basic learning guide for geometricians; it was translated into Arabic and then English. All in all, Elements went through many editions, and many materials remain relevant today.

Notably, the researcher’s work not only included his own discoveries but also incorporated theories known before. He revised the materials, made it systematic, and united many separate pieces into something consistent. Some books started with a list of notions; there is a catalog of axioms and postulates in the first volume.

Euclid’s postulates may be subdivided into two groups: general notions (with common scientific assertions) and geometric axioms. The former group included the passages as follows:

“The whole is greater than the part”

The second group contains other statements:

“A straight line may be drawn between any two points”

“All right angles are congruent”

Elements was not the only book by the mathematician – he created several works on catoptrics (a part of optics dealing with the mathematical function of mirrors) and conical sections. Euclid worked on hypotheses about trajectories of the motion of a body and mechanical laws; he created the key instruments for geometry. Besides, many books did not survive to the present days.

In ancient times, philosophy was closely related to other sciences. Geometry, astronomy, arithmetic, and music were viewed as mathematical sciences, and their understanding was necessary for high-quality philosophical studies. Euclid developed Plato’s teachings about four elements corresponding with four right polygons:

In this context, Elements is a peculiar teaching about how to construct Platonic solids, or five right polygons. It contains all the necessary suppositions that there are no other right solids but these five.

Almost every theorem in Euclid’s Elements meets Aristotle’s criteria of evidence: the author consecutively goes from causes to effects and creates logical chains. Even general confirmations are proven this way, according to Aristotle’s principles.

While some scientific information came to our days, there are almost no facts about Euclid’s personal life. A legend says that king Ptolemy wanted to study geometry and felt irritated because it was so difficult. He addressed Euclid to find an easier way to knowledge; the scientist presumably told him: “Sire, there is no royal road to geometry”. Today, it is a popular quote.

There is some evidence that the scientist founded a private school of mathematics at the Library of Alexandria; many enthusiasts attended it. Euclid continued to help his students to write works even in his last years; they created theories and developed corresponding arguments for them.

There is no data about the man’s appearance; his sculptures and portraits are the results of artists’ imagination. The imaginary picture traveled through centuries up to the present days.

Euclid presumably died in the 260s BC; the cause of death is unknown. The scientist’s heritage lived for the next two thousand years and inspired many great people. The politician Abraham Lincoln is said to quote Euclid in his speeches; he always had several books of Elements at hand.

Later, many scientists used Euclid’s works as the fundament for their own. The Russian mathematician Nikolai Lobachevsky became the author of the hyperbolical geometry, also known as Lobachevskian geometry. Today, the form of Euclid’s mathematics is identified as Euclidean geometry.

Euclid also created a device to determine how high a pitch was and studied interval proportions; his works contributed to the creation of keyboard musical instruments.