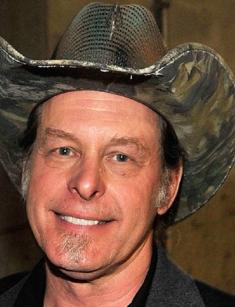 Ted Nugent is an American legendary singer and songwriter. He is a recognized top guitarist with a lengthy career. In the early stages of his artistic path, the singer became popular as the lead guitarist of the music band Amboy Dukes. After performing with the band, Ted launched a successful solo career. The musician also deals with political issues, including the right to bear arms and opposition to animal rights.

Ted Nugent was born on December 13, 1948. He comes from Redford, Michigan, the U.S. Ted grew up in a military family: his father, Warren Henry Nugent, was a career Army sergeant. His mother's name is Marion Dorothy. Even though the boy was raised with strict discipline, Ted started playing the guitar at an early age. His parents noticed his deep interest in rock & roll music when their child began playing instruments by the time he was six.

Ted got his education at St. Viator High School and William Fremd High School. He formed his first music band, Lourds, when he was 14 years old, after being inspired by British blues-rockers, The Rolling Stones and the Yardbird.

Ted Nugent was a student when he along with other musicians like Bob Lehnert, Gary Hicks, and Dick Treat formed a band The Amboy Dukes in 1964. The music band played different rock genres: hard rock, acid rock, and heavy metal. The group was quickly gaining recognition, giving concerts in clubs and bars.

In 1967, the band released the first album The Amboy Dukes which was well received by the public.

The Amboy Dukes had lived through frequent changes of its members, except for Ted, who was the only constant figure in the team.

Ted made a decision to officially replace the band's name to Ted Nugent & the Amboy Dukes. During that period of his career, Ted stayed highly demanded. He performed a lot on stage, making duos with other famous musicians.

In general, the group recorded seven studio albums. One of their top hits is the single Journey to the Center of the Mind. An interesting fact was that Nugent had no idea that this song was about drug use. All his life, Ted clamors against drugs and alcohol.

The year 1975 was a turning point for the musician: Nugent started his solo career.

In 1975, Ted Nugent reassembled the music group and invited Derek St. Holmes, Rob Grange and Clifford Davies to be a part of his team. His self-titled debut solo album brought him success and fame.

The singer enjoyed the peak of his fame as a solo artist during the 1970s. In 1976, the second album Free-for-All was out, which featured the hit single Dog eat Dog.

In 1977, he followed it up with the albums Cat Scratch Fever and Weekend Warriors. Both the albums became big commercial successes.

The same year two legends of rock, Ted Nugent and Lemmy Kilmister, made a joint recording of Queen’s song Tie Your Mother Down. It was an incredible union of talented musicians.

In the 80-s, he released several albums and went on many tours. Ted tried to perform different directions of rock music, but the audience remembered him playing the raw and raging rock that brought him success at the beginning of his career.

By the end of the decade, he formed a supergroup Damn Yankees with Jack Blades, Tommy Shaw, and Michael Cartellone. In 1990, the band released the album named Damn Yankees. Later Ted returned to singing solo and issued his best album in that time called Spirit of the Wild.

He toured a lot all over the U.S. performing in concerts. Ted was reported to have made more than 300 shows per year.

On August 12, 2019, Ted Nugent is going to give a big concert at the historic Riviera Theatre.

The greatest guitar player of all time was famous for his performing style. Sometimes, he was even called a “wildman” for wearing only a loincloth and long boots.

Ted Nugent is known to have six children. Now he is married to Shemane Deziel. She is his second wife, and they have two children. Shemane is a popular TV personality and a fitness instructor. She is also involved with volunteer work.

From 1970, he was dating Sandra Jezowski. They divorced in 1979. The couple had two children.

In the late 1960s, prior to his first marriage, Ted adopted a boy and a girl, but it was announced in mass media only in 2010.

Ted Nugent was accused of having relationships with underage women. In 1988 episode of Behind the Music, a documentary television series, he admitted having several affairs with young girls.

It should be noted that the rock singer is against alcohol and drugs. Other artists were so impressed to know about that because they described Nugent's performances as "the craziest thing they'd ever seen."

At present, Ted and his family resides in Waco, Texas. His net worth is estimated at $20 million.

Ted Nugent is actively engaged in politics. He is known to be a supporter of President Donald Trump. Ted put forward a lot of criticism toward President Barack Obama. His statements were rather unpleasant, and he was even called a racist for that. On April 19, 2017, Nugent in the company with Sarah Palin and Kid Rock had a visit at the White House. After the long talk, they had a dinner with President Donald Trump. The meeting took place in the oval office.

In 2017, Ted Nugent gave a big concert at The Cave Big Bear, a live entertainment venue. He was a welcome guest there as he was well known for his patriotic views and political activism. Ted was invited to celebrate American independence.

In 2001, the singer became a host of the reality television show, Spirit of the Wild. The main theme of the show is hunting. Ted hunted wild animals and instructed the audience, giving wholesome advices. There is a video On YouTube with Ted Nugent, which is called Down to Earth. It depicts vintage bow hunting by a young Ted, going into the wild. His popularity as a hunter has greatly increased after filming instructional videotapes. Ted is an opponent of animal rights. He expressed his opinion in mass media, explaining why hunting is not cruel. He thinks that vegans kill more animals than people who eat meat do. Having a great experience behind his back, the singer wrote several books on hunting.

Nugent speaks out for the right to bear arms. In 2013, there was a serious conversation with Piers Morgan and Nugent on gun control. Ted defended his assertion that weapons could not be dangerous for people, while his opponent had the opposite position. In March 2018, Nugent spoke out about Parkland survivors after the school shooting at Stoneman Douglas High School. According to his words, survivors of the shooting were wrong to blame the NRA and its members for mass shootings.

In 2017, Ted made the “Take a Knee” commentary. Thus, he showed his reaction to NFL players protesting racial inequality by taking a knee during the National Anthem. The famous quote appeared at Ted Nugent’s Facebook page but, as it turned out later, Nugent wasn’t the commentary’s original author.

Nugent's behavior is described as sharp and controversial. But his manner of expressing his point of view on various aspects of life always resonates with the audience.