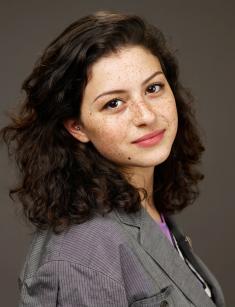 Alia Shawkat is a famous actress and artist, who is known for her roles in numerous movies. Many people know her after the release of television sitcom Arrested Development, in which Alia demonstrated her acting talents and began getting offers to star in other successful movies and series.

The actress was born in Riverside, California, in the family of people who were connected with the motion picture industry. Her father was a film producer. Her grandfather, Paul Burke, was an American actor best known for his lead roles in two 1960s ABC television series, Naked City and Twelve O'Clock High. Perhaps, she inherited her talents from her parents. As a child, Alia spent her early years in Palm Springs along with her two brothers.

During her college years, Alia was looking for interesting roles in Los Angeles. She had a dream of becoming an actress or a famous person, so she attended auditions. In the interview, the actress spoke a lot about the time when she was a teenager. According to her, young people were doing heavy drugs, and she saw people partying really hard because they were bored. She herself was a party person too but managed to find interests in life and follow them.

Alia starred in numerous movies and television serious. One of her best roles is the role of Maeby Fünke in a documentary-style sitcom Arrested Development. The actress has been starring in the series from 2003 to 2018. Many reviewers highly praised her performance in the show. A funny girl with curly hair was appreciated for her nice appearance and sense of humor. In the revived fourth season of Arrested Development 2012 and Alia starred as Maeby Fünke.

Alia was introduced to show business by appearing in a Calvin Klein catalog, which immediately attracted the attention of commercial and theatrical agents in Hollywood.

In 2009, the actress performed in the movie Whip It. Ever since the starring in this movie, she has been best friends with fellow actress Ellen Page. Next year, Alia, along with her close friend Mae Whitman, sang guest vocals on a number of tracks from indie-punk band Fake Problems' 2010 album.

In 2015, the actress guest-starred on Broad City, portraying the romantic interest and look-alike of Ilana Glazer's character for one episode. The two women were only attracted to one another due to their similar appearances. There are also many people who think that Alia Shawkat looks alike Alexa Vega, actress and singer, who is known for her role as Carmen Cortez in the Spy Kids film series.

Alia starred in the comedy Search Party, which premiered in 2016. In 2019, she appeared in the 2019 movie Animals. Alia said that it was a new experience for her to star in this work. She enjoyed playing her role as Tyler, although her previous characters were more relatable, according to her. Alia often plays a free, slightly lost characters with a fantastic sense of humor.

In June, 2019, after the actress just turned 30, Alia's got some questions about what's coming around the corner in this decade. She had a talk with Belgian-born psychotherapist Esther Perel about different periods of her life. Plus, they talk about adult friendships, and why it's important to stay in touch with people from all the different decades of your life.

The actress had several affairs. In 2003, she was in a relationship with Michael Cera, a Canadian actor in Arrested Development. But their relations did not last long, and the couple broke up. From 2009-2010, Alia had another boyfriend: Jack Antonoff. They had been dating for only one year. After that, she was seen with a new lover - Michael Angarano, in 2010. This relationship also did not last long. In May 2017, Alia announced that she is bisexual.

Speaking of her interests, that are not connected with acting, Alia is known as a talented painter. She has participated in gallery shows in Los Angeles, Mexico City, and Paris. She posts her artworks on her Instagram profile with 69,000 followers. On her Twitter account, the actress has over 54,000 readers.

In her free time, she enjoys horseback riding, ice-skating, dancing, and playing the piano. She also likes to make music and sing in jazz bars.

The actress has an estimated net worth of $4 million.